A solid laptop for a solid grand

It’s impossible to review an HP laptop without spending a chunk of time on its design. HP knows how to make a gorgeous laptop, and the Envy x360 15 is no exception.

The Envy line, for a while, was a more utilitarian-looking counterpart to HP’s high-end Spectre products. But recent Envy models have gotten a significant step up in build quality, and while this year’s larger Spectre has rounded corners and more exciting accents, the design differences between the two are not super noticeable to me while I’m driving them. They are both really solid and fun to use. And that’s great news for the Envy, which currently starts as low as $629.

The Envy is, of course, not a perfect laptop, and there are a few areas where the price point shows. But I am happy overall with the fact that HP is allowing the Spectre’s classy build to trickle down to more affordable tiers. I hope more companies will follow suit. A nice-looking laptop doesn’t need to be a sign of status. 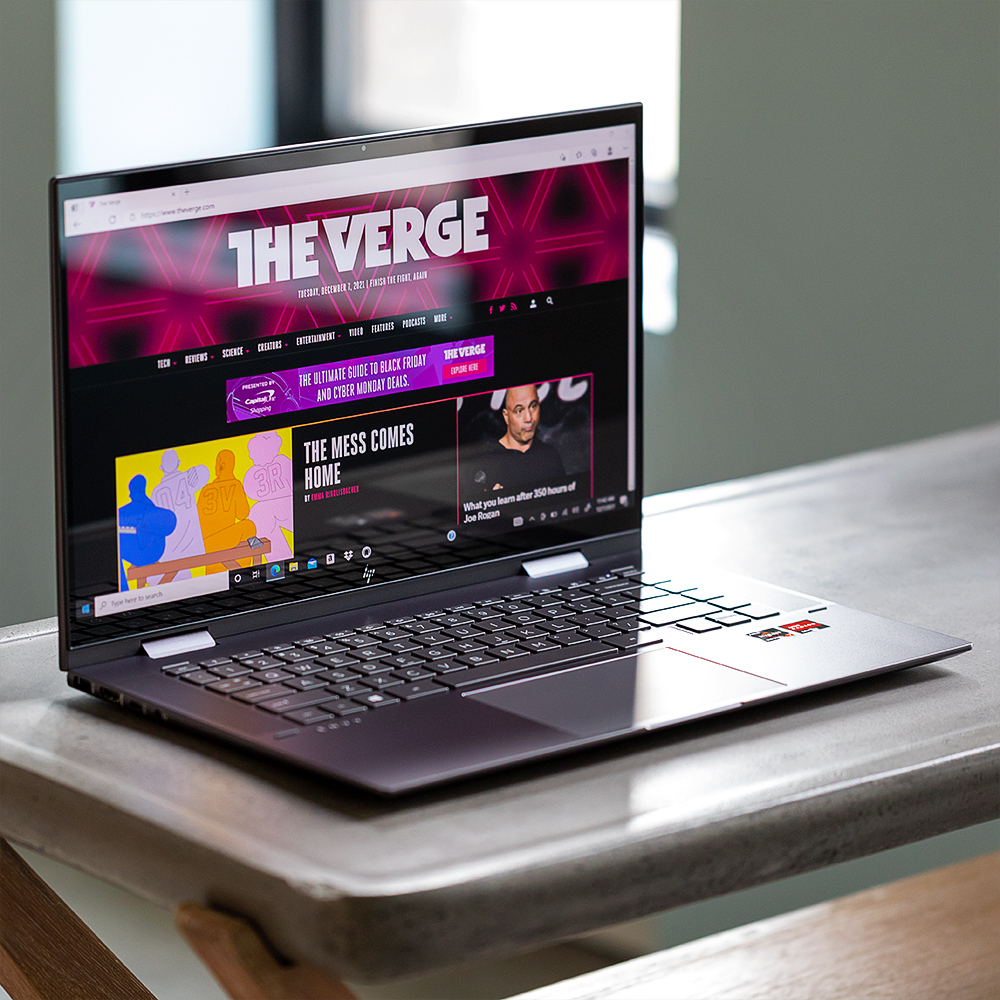 The chassis, while not the lightest 15-incher around at 4.11 pounds, is sleek and modern, with an 89 percent screen-to-body ratio. The lid and bottom bezel have a lustrous HP logo that looks C-suite ready. The chassis is recycled aluminum, and it’s quite smooth to the touch. Even the font in which Envy is written in various places is quite classy. There’s very little flex in the lid and none in the keyboard that I could draw out. And the hinge was sturdy, with no screen wobble while I typed or used the touchscreen.

One thing that impressed me was that the lid did a surprisingly good job of rejecting fingerprints. Dark laptops, especially in this price range, can sometimes appear full of smudges after just a few days of use. But I had to put forth some effort to make a smudge on this lid that lasted — and even after I’d smudged the surface up, it still looked pretty clean under bright light. All told, I think this is one of the better-built 15-inch laptops you can buy at this price point.

The hinge was sturdy, with no screen wobble

The Envy model I’ve been testing, currently listed for around $1,000, includes an AMD Ryzen 7 5700U chip, 16GB of memory, and 512GB of storage. I can’t complain about those specs for that price, especially with this build quality. There are Ryzen 5 options selling for as low as $629, which I think could also be a great deal, as Ryzen 5 chips have also shown excellent results this year. I don’t see the power delta making a huge difference in a standard office workload like mine.

I do find the limited screen options disappointing. My unit comes with a 1920 x 1080 touchscreen (16:9 aspect ratio, which isn’t my favorite). FHD is the only option available among the listed AMD models on HP’s website. That’s not to say the 1080p screen is bad — it’s reasonably accurate and reaches 400 nits — but there may certainly be customers, especially in the creative space, to which the 2-in-1 form factor ostensibly caters, who need something better.

It should go without saying that the Ryzen chip flies. My daily work was very, very smooth, with zero cooling noise of any kind. Even when I was running Zoom calls over streams over heaps of Chrome tabs, the fans didn’t spin up once. I was also able to touch up and sort through photos with no problem. Enterprise customers will likely, of course, want more out of both the specs and the screen, but this system is more than adequate as a personal driver.

Battery life was also solid. I easily got eight and a half hours of daily use with the screen at medium brightness and Battery Saver on. For a 15.6-inch laptop, especially one performing this well, I can’t complain. The battery is a fairly small 51Wh, which shows just how efficiently the 5700U is working.

The chassis, performance, and battery life are all excellent. That’s pretty much all I need to see to be fine with a $1,000 laptop. There are, though, a few downsides you likely won’t see if you go up a few hundred dollars in price. For one, while HP has made great strides in its touchpad quality of late (there are no longer issues with palm rejection, and the gestures at least all work now), this one still isn’t my favorite. The click is fairly stiff. I also found myself skidding a lot when I scrolled.

The Envy also comes loaded with a whole bunch of bloatware, including ExpressVPN and various McAfee things. I was getting various popups when I first opened up the unit. These programs can all be uninstalled, of course, but they don’t go easily. I had to close all of my browser tabs and restart the computer multiple times in order to get everything off.

The keys are snappy, but also feel slightly flat for my taste

I have mixed feelings about the keyboard. It feels quite nice to type on, with a classy font, neat backlighting, and a smooth texture that match the rest of the chassis well. I appreciate that there’s a webcam kill switch in the function row (though a physical shutter would be even better). The keys are snappy but also feel slightly flat for my taste, and I was below my usual typing speeds. And the arrow keys are crammed into a square in the bottom right corner of the deck (rather than the inverted T), and up and down can be tough to hit.

Finally — and this is a personal disappointment, rather than a flaw, per se — I wish a stylus were included. A 15.6-inch convertible can be a pain to use as a tablet for general tasks, and the ability to write and draw on such a large surface remains one of its major use cases. There’s no garage for the stylus, either, which makes it a non-starter for me as someone who chronically loses small things. The compatible stylus is currently selling for $69.99, which is non-trivial.

All that said, while the Envy has dinks here and there, it nails the three elements that will impact your user experience the most: performance, battery life, and build. As other high-quality laptops across the board appear to be creeping up in price, I’m glad to see that there are still solid options like this at the $1,000 mark. Don’t get me wrong — $1,000 isn’t cheap. But as many famously excellent models appear to be creeping up in price each year, I think the Envy x360 15, and the Envy line as a whole, is a good reminder: you don’t need to follow them there. There’s still great stuff right here.

To start using the HP Envy x360 15, you’ll need to agree to the following:

That’s six mandatory agreements and 26 optional agreements to use the Envy x360 15.