Logitech G413 TKL SE review: you get what you pay for

Share All sharing options for: Logitech G413 TKL SE review: you get what you pay for

I have a confession: I’m exhausted by keyboard RGB lighting. Ever since Cherry announced its debut MX RGB switches at the end of 2013, it feels like no mainstream mechanical keyboard has been complete without a set of lights capable of twinkling like a Christmas tree. But I switch them to plain white at the first opportunity. I want to be able to see my keys, not get distracted by them.

That’s the first reason I was intrigued by Logitech’s new budget keyboard, the G413 TKL SE, which has a simple design and plain white backlighting. The second reason is its price, $69.99, which is very affordable for a mechanical keyboard from a major brand. On paper, it’s perfect, and one of those rare examples where stripping out a supposedly premium feature actually makes for a more appealing device overall.

In use, however, the Logitech G413 TKL SE definitely feels like a $69.99 keyboard, with a typing feel that feels a little cheap compared to more expensive competitors. Which is a shame because, on paper, it basically offers everything you’d hope for. 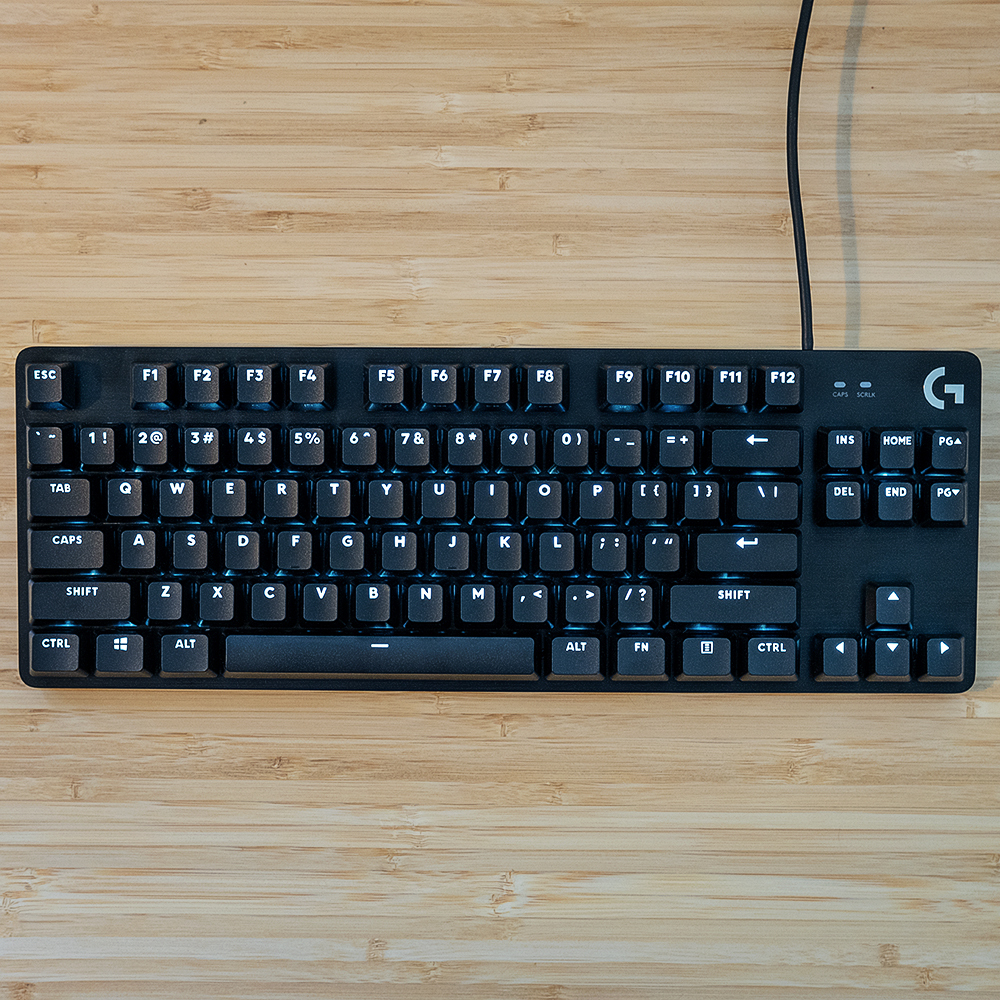 The G413 TKL SE is a tenkeyless keyboard, which means it lops off the numpad to the right to make for a slightly more compact layout without going so far as to cram everything into a laptop-style rectangle of keys. If you need a numpad, there’s a larger model called then G413 SE, which is functionally identical apart from the layout. I’m testing the keyboard with a US layout, but as of this writing, Logitech is yet to get back to me about a UK layout version.

If the G413 name sounds familiar, it might be because Logitech originally used the name on a keyboard it announced back in 2017. The G413 TKL SE lacks the USB passthrough of the original G413, and it’s also only got 6-key rollover as opposed to 26, which means you’re able to press fewer keys simultaneously before it gets confused. The SE also only comes with white backlighting, while the previous G413 was available with either red or white, depending on the model. The original G413 also didn’t have a tenkeyless model.

The most important difference between the G413 and G413 SE models, however, is that they use regular Cherry MX-style switches rather than Logitech’s proprietary Romer-G switches. That means you’ll be able to swap out their keycaps for a wide range of aftermarket options in case you want to change the look of the G413 TKL SE.

The Logitech G413 TKL SE might use Cherry MX-style switches, but they’re not original Cherry models. Instead, they’re Longhua switches made by Kaihua. There’s also only one choice of switch, “Tactile,” which is roughly equivalent to Cherry’s MX Brown switches. There are no linear or clicky options here, and nor is the G413 TKL SE hot-swappable, meaning you’ll have to use a soldering iron if you want to change its switches.

Here’s what typing sounds like on the Logitech G413 TKL SE switches:

Unfortunately, these switches simply don’t feel as nice to type on as more premium keyboards and are the main place you feel the Logitech G413 TKL SE’s affordable price tag. As a whole, it can feel a little rattly. Keypresses generate hollow thuds rather than crisp taps, and the switches just feel off in a way I struggle to put my metaphorical, if not physical, finger on. That’s perhaps understandable, given it costs almost $100 less than many competing mechanical keyboards from mainstream brands, but it’s a stark reminder that “mechanical” keyboards encompass a huge range of different quality levels.

I don’t think most people will have an urgent need to replace the G413 TKL SE’s stock keycaps. They’re made of hard-wearing PBT plastic, their backlit legends are clean and crisp, and they have a nice bold font that doesn’t feel too angular or aggressive like you find with other gaming-focused brands. The one exception is if you’re planning on using the G413 TKL SE with a Mac since there are no macOS-specific legends on the keys (typical for a gaming-focused keyboard).

Beyond its keycaps, the TKL SE’s clean design continues. The only bit of branding is a silver Logitech G logo on the top right, but otherwise, the keyboard is entirely black aside from its white LEDs. Its 1.8m (almost 6ft) long USB cable, unfortunately, isn’t detachable, but there are a pair of feet on the keyboard’s underside to pitch it up at a comfortable angle. Media, volume, and other functions are built into the function row and accessible via the Fn key.

The one layout tweak I’d make is to add a discreet Print Screen key, which, on tenkeyless boards, is generally located above the Insert key. But here, that space is taken by LEDs for Caps and Scroll-lock. In my ideal future, we’d kick the Insert key off modern keyboards entirely to avoid facing these sorts of issues (it’s also time to get rid of Pause Break, quite frankly), but I digress.

Although you could fix these layout issues with third-party software, the keyboard isn’t natively remappable, and it doesn’t work with Logitech’s G Hub software. I’d appreciate the remapping feature, but I suspect a lot of people will be happy not to have another app constantly running in the background on their computer.

Although Logitech is branding the G413 TKL SE as a “gaming keyboard,” you won’t find many concrete specs here to back that up. There’s no mention of the kind of high polling rates that reduces the input lag of keyboards like the Razer Huntsman V2 or Corsair K70 are capable of. Its switches also don’t have the kind of reduced travel that you’ll see gaming-focused switches marketed with. You need to press them 1.9mm before they actuate, compared to 1.2mm for Cherry MX Speed Silver, for example. But, honestly, I’ve never seen much of a benefit from these gaming-focused features, and I certainly wouldn’t pick one keyboard over another because of them.

I have a lot of time for what Logitech is going for with the G413 TKL SE. This is a mechanical keyboard that’s stripped back to its essentials and sold at an affordable price. There’s no hot-swappable switches, no detachable cable, and no RGB lighting. There’s just one switch option, one backlight color, and a reasonable $69.99 price tag. If you prefer tactile switches, it should be an easy choice.

I just wish typing on this keyboard felt nicer. It’s not broken, and it’s not difficult to use; it just feels cheap compared to more premium (and more expensive) alternatives like the Keychron Q1 or Filco Majestouch 2. That won’t matter much if this is your first mechanical keyboard, but if you know better, then you’ll probably expect better.