There’s no shortage of GPS running watches. Seriously. When I ran the New York City Half Marathon last month, I quickly lost count of the different brands and models of watches I saw on the wrists of my fellow runners. Runners are among the most eager to quantify their workout data with tech — be it with watches, smart shoes, smart insoles, apps, or even a connected treadmill. So I was wholly unsurprised when Polar billed its $299.95 Pacer Pro as a GPS watch that’s specifically designed to help runners take their race to the next level.

The thing is, I don’t really see how its features are that different from Polar’s other multisport watches. I also don’t see how this is a watch that caters to runners.

In practice, we’ve basically seen this watch before. As far as price, feature set, and design, it reminds me a lot of the $299.95 Polar Vantage M2 from 2021. In fact, I’d say the two watches are so similar, I’m stumped why this watch simply isn’t the Vantage M3.

Our review of Polar Pacer Pro 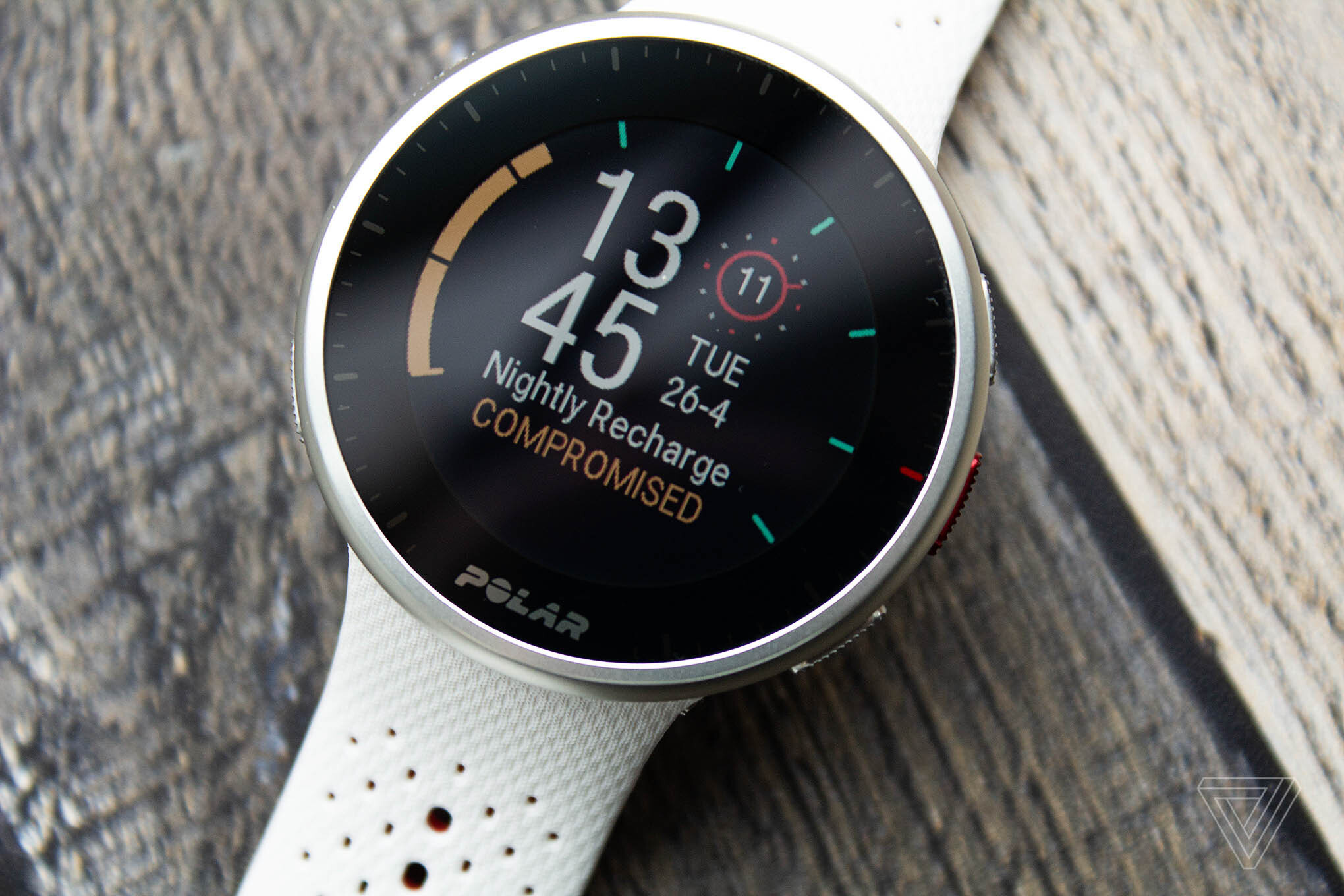 It’s not that there aren’t any differences. The Polar Pacer Pro has faster hardware and 5MB of internal RAM. That might sound low compared to something like the Apple Watch, but it’s a lot more than what every other Polar watch has. One of my biggest issues with Polar watches over the years has been how laggy the screens and syncing can be. The Pacer Pro fixes that. The Pro also adds a barometer, which Polar says can help you measure running power, aka your output, in watts. And while the Pro and M2 have similarly sized displays, the Pro’s display is easier to read. The case also feels a smidge smaller, thinner, and more lightweight. The way the straps attach is also different. The Pacer Pro uses Polar’s proprietary Shift adaptor while the M2 uses your standard spring release pins.

(A quick detour regarding the Shift adaptor. I appreciate that it enables you to use standard straps you may already have. That said, it’s annoying. You have to use a ballpoint pen to pop out the proprietary pin and then swap in a different set of lugs just so you can use standard straps. It’s not easy to figure out just by looking, and I had to Google a video tutorial. I also now have black pen ink all over my white review unit.)

The Pro’s resemblance to the M2 aside, 99 percent of the features you’re getting on the Pacer Pro aren’t new. Hill Splitter, FuelWise, Nightly Recharge, Fitspark, Training Load Pro, running performance tests, turn-by-turn route navigation — we’ve seen all of these before on other Polar devices. Sure, premium Polar watches like the Grit X Pro come with a little more (i.e., more dashboards, fitness test types, etc.) but this feels a lot like reshuffling features without really adding new value.

When Polar says this watch is going to help running “pros” get an edge, the average person would probably expect running-specific tools and insights — perhaps mid-run alerts to up your cadence or reduce your intensity to conserve stamina. The closest thing to that on the Pro is the running power feature. It’s meant to help you gauge how efficiently you’re running, but of all the similar features I’ve tested on other running watches, this isn’t the most intuitive implementation of it. I was often puzzled as to what it meant during a run and how to adequately interpret that chart afterward.

The reality is the vast majority of features on this watch aren’t just for runners. Turn-by-turn route navigation is useful to hikers, cyclers, walkers, and anyone who is directionally challenged outdoors. Recovery insights like Nightly Recharge and workout suggestions like Fitspark are great for anyone trying to craft a training schedule. Hill Splitter — a feature that contextualizes your uphills and downhills — works for cyclists, too. The same is true for Fuelwise, which is a feature that helps you figure out your nutrition strategy for endurance sports. That’s great for long-distance runners but also for cyclists and hikers. This isn’t necessarily bad! Usually, having multiple functions across several categories is a good thing. It’s just slightly misleading to market this as a watch for runners when triathletes, cyclers, and outdoor enthusiasts on a budget would also get a lot from it.

The one completely new feature the Pacer Pro introduces is the walking test. Polar markets this feature as an easy fitness test for folks just starting out on their fitness journey who may not be physically capable of doing Polar’s running performance test. In total, the test takes about 25 minutes — a 5-minute warm-up, 15 minutes of fast walking on flat terrain, and a 5-minute cooldown. At the end, you’re supposed to get an estimate of your VO2 Max score. (This score is often used as a means of measuring your cardiovascular ability and progress over time.)

This is a good idea for beginners. Brands like Polar tend to be intimidating as, let’s face it, they cater to athletes who already have good habits in place and know what they’re doing. Polar’s running test is also no joke. It’s 30–40 minutes of running at an increasingly fast pace until your lungs hurt, your legs burn, and you fall into a sweaty heap on a nearby bench. It’d be challenging and not that helpful for true beginners.

But, in my testing, the walking test was way off. For starters, you have to walk at a pace where your heart rate is at least 120 beats per minute (bpm). According to my Apple Watch, my comfortable walking pace is about 17 minutes per mile (or 3.5 miles per hour). My heart rate at that pace was only about 100bpm. To get to 120bpm, I had to hoof it at 14 minutes per mile. Several times the watch admonished me with a message saying, “Don’t run!” But I wasn’t. And for my troubles, the watch told me I had a VO2 Max score of 28 — which is, by Polar’s definition, poor for my age and gender. Before this test, Polar and Garmin both put my VO2 Max score at around 39–40.

Granted, the walking test is meant for beginners just starting out. It’s likely not designed for people like me who already run several times a week, so that could’ve heavily skewed my results. Still, I can’t say that instilled me with confidence.

I recognize I’m griping a lot about a very functional GPS watch whose biggest crimes are unclear marketing and being kind of boring. In every other respect, the Pro is your quintessential Polar fitness watch. Battery life was excellent, matching Polar’s seven-day estimate with no issues. The screen, while not pretty and cursed with huge bezels, is incredibly readable in direct sunlight. In my running tests, the GPS tracking was spot on with my Apple Watch Series 7 and Garmin Fenix 7S. The heart rate monitoring was also mostly reliable and exactly what you’d expect from a multisport fitness watch. It may have struggled to accurately depict my heart rate during the walking test — at some points, it was about 15bpm off before correcting itself. But, as I mentioned earlier, this particular test wasn’t Polar’s finest work, nor was it intended for someone like me.

The worst thing I can say is the Polar Flow app is convoluted and that its smart features are limited — but these aren’t new complaints, either. The Polar Flow app is still difficult to navigate even though it gets you good insights without bombarding you with a wall of data like Garmin sometimes does. You can get push notifications, set timers, and control your music, but you’re not going to get fancier features like safety alerts or NFC payments. Just as how the features are things we’ve seen a zillion times before, we’ve also seen the Pro’s weaknesses before, too.

Actually, I take it back. The Pro’s biggest crime is that it makes Polar’s current lineup confusing as hell. At $299.90, the Pacer Pro is competitively priced for the advanced feature set it offers. Multisport GPS watches are an expensive category, but you’re getting the majority of the same features as the $499.95 Grit X Pro. And, as I’ve mentioned earlier, there isn’t really a reason to buy the M2 anymore because the Pro is basically the same thing with more updated hardware.

I’d say that calculus might change if you find a heavily discounted M2. But, in another twist, Polar will soon release a cheaper entry-level Pacer watch, too. That watch is $199.95 and is almost identical to the Pacer Pro. It’s just missing the barometer that enables the running power metric, Hill Splitter, and turn-by-turn navigation. If those features don’t catch your fancy, you’re better off saving the extra $100.

I’m happy that Polar is offering more of its advanced features at a lower price point. I truly am. The Pro is a good GPS smartwatch, and I’d happily recommend it to runners, triathletes, and multisport athletes who don’t want to spend a lot and don’t care for a ton of bells and whistles. But I could also say that about Polar’s Vantage M2, Pacer, and the $229.95 Ignite 2. I wish Polar spent a bit more time clearly differentiating each watch within its lineup. Even though Garmin watches also share a ton of overlap, you can just eyeball a Venu, Fenix, and Forerunner and have a decent idea of who each watch caters to. It’s much harder to do this with Polar’s watches on every level — and that’s a disservice to both consumers and all the things Polar does well.

To use the Polar Pacer Pro, you must pair it with an iPhone or Android smartphone. That includes the phone’s Terms of Service, privacy policy, and any other permissions you grant. You must also create a Polar Flow account to use the app.

By setting up the Polar Pacer Pro, you’re agreeing to:

You must also grant the Polar Flow app certain phone permissions for notifications, Bluetooth, location, calendars, digital voice assistants, and cellular data. Additionally, integrating with other services, like Strava, Apple Health Kit, or Komoot, also requires you to agree to those individual terms and policies.

Final tally: you must agree to whatever your phone requires, plus two mandatory agreements. There are also optional phone permissions and third-party app integrations.