If last year’s Logitech Pop Keys wireless mechanical keyboard was all style and no substance, then Logitech’s newly announced MX Mechanical keyboards are the polar opposite. These are aggressively functional keyboards with sensible feature sets, sensible designs, and sensible layouts.

That can make the $169.99 MX Mechanical and $149.99 MX Mechanical Mini seem like outliers in the world of mechanical keyboards, which often use flashy designs, RGB lighting, and colorful keycaps to grab your attention. But Logitech’s new keyboards are worth paying attention to because of their great battery life and a well-thought-out set of features that’ll make them a solid upgrade for anyone currently using a laptop-style membrane wireless keyboard.

Our review of MX Mechanical Mini 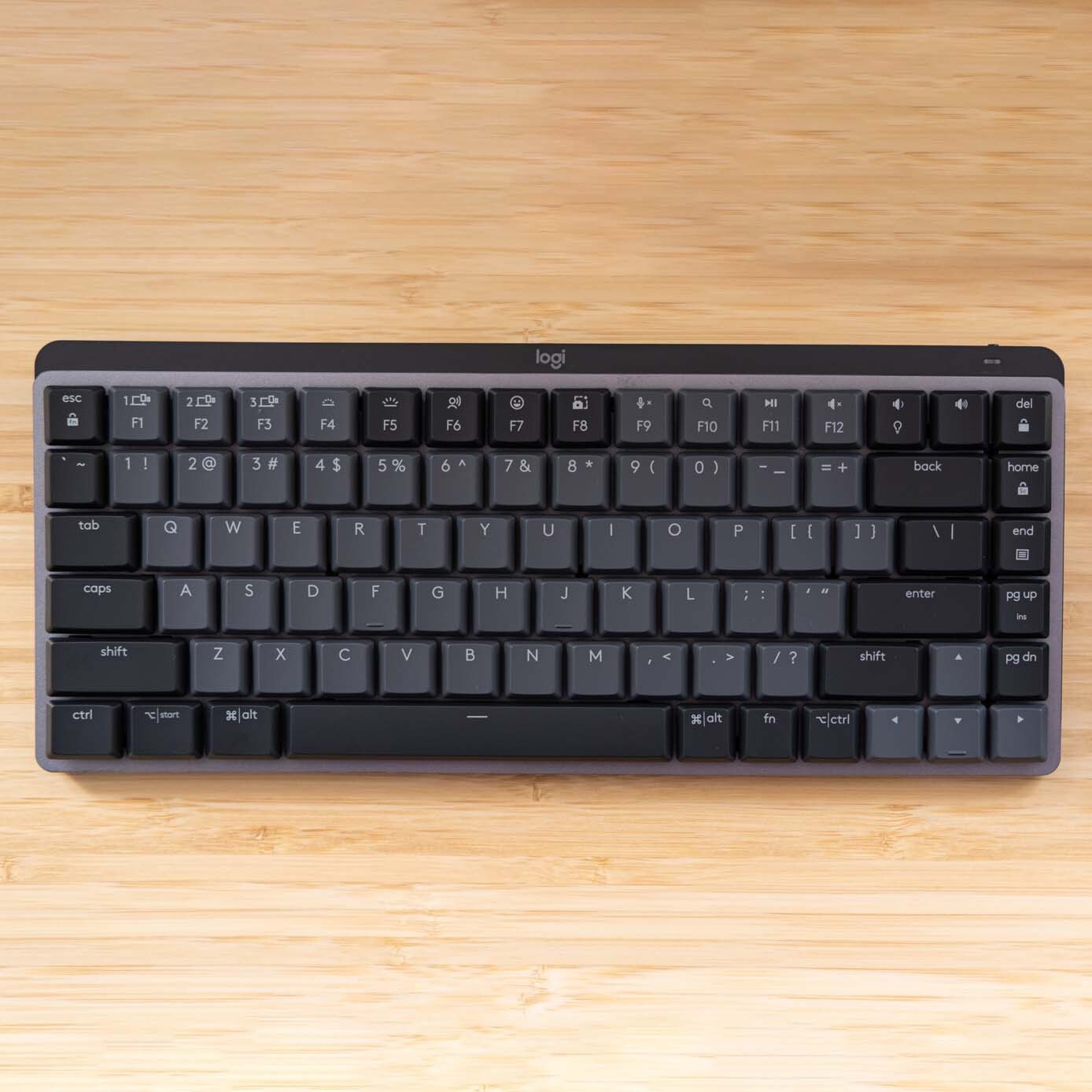 For this review, I’ve been using the MX Mechanical Mini, which uses a compact 75-percent layout similar to what’s found on most laptops alongside the company’s new MX Master 3S mouse. (Check out my review here.) The MX Mechanical, meanwhile, is larger and uses a full-size keyboard layout that includes a numpad. But, aside from their layouts, both keyboards are functionally very similar.

Any backlight color you want, so long as it’s white

The MX Mechanical Mini has a muted two-tone design that’s unlikely to attract too much attention. Around top, there’s a power switch and USB-C connection for charging, and underneath are a pair of flip-out feet to tilt the keyboard up at an 8-degree angle. It’s backlit, but only with plain white LEDs. Although you can customize how the LEDs flash, they’re not RGB and can’t illuminate your desk like a multicolored Christmas tree. Like some of Logitech’s previous keyboards, the MX Mechanical Mini has sensors to detect when your hands are nearby and turn on its backlight before you press a key — a neat feature if you’re reaching for the keyboard in a dimly lit room. It’s all very sensible and well thought out.

This is a low-profile keyboard, which means its switches are shorter, and there’s not as much travel as what you’d get from a full-height mechanical keyboard. Personally, I prefer my mechanical switches to be full-height, but shorter switches like these are likely to feel more familiar if you’re used to typing on laptop-style scissor switches like those found on the other keyboards in Logitech’s Master series — like the MX Keys. The switches are manufactured by Kailh, and there’s a choice of tactile browns, clicky blues, and linear reds. My review sample had tactile brown switches.

There aren’t many options for customizability here. Unlike Keychron’s competing low-profile keyboard, the Keychron K3, the MX Mechanical Mini’s switches aren’t hot-swappable, which means you’ll have to get a soldering iron out if you want to replace them. And because they’re low-profile, a lot of the aftermarket keycaps on the market are unlikely to work with them. This really isn’t the keyboard for hobbyists to tinker with.

The Logitech MX Mechanical Mini supports both Windows and macOS (and is happy connecting to mobile iOS and Android devices as well). If you’re connecting via Bluetooth, it’ll detect the operating system automatically and adjust its layout, but if you’re using its USB receiver, you’ll need to do this manually with a keyboard shortcut. There’s no choice of keycaps with either Windows or Mac symbols on them; they’re all printed on the same keys. It looks slightly messier, but Logitech’s priority is to minimize the amount of plastic that ships in each box. It’s another function-over-form decision Logitech made with the keyboard.

The MX Mechanical Mini can save up to three paired devices and switch between them with a keyboard shortcut. It can connect over Bluetooth but also comes with a USB-A Logitech Bolt receiver (which Logitech claims offers better security and lower latency). I had some latency issues with the receiver, which Logitech spokesperson Wendy Spander tells me can be caused by “cables and metal near the receiver.” Using a short USB extension cable completely fixed the issue, as did switching to Bluetooth, but it’s an annoying problem to have in the first place.

Battery life is rated at 15 days with backlighting on and 10 months with it off. That’s a lot better than the Keychron K3, which offers 99 hours with its backlighting off or 34 hours with it on. After a week of daily work use, my battery life sat at 45 percent, which suggests my keyboard is going to run dry a little before the 15-day mark. The keyboard charges over USB-C, and its battery is technically replaceable when it eventually dies. The compartment is hidden beneath the sticker on its underside, though, for whatever reason, Logitech doesn’t recommend that owners carry out the repair at home. There’s no way to see the keyboard’s remaining battery life on the device itself; for that, you’ll need to head into Logitech’s Options Plus software.

Options Plus is Logitech’s latest companion software for its computer accessories. At its most basic, it offers an at-a-glance view of the battery life of all your Logitech accessories, but it can also be used to customize how they work. You can’t remap every key, but you can change what the shortcut keys on the top row do as well as the all-important cluster above the arrow keys to the right. It strikes a nice mix of customizability and approachability, though it’s a shame that this remapping isn’t saved to the keyboard itself and disappears if you plug the keyboard into a computer without Options Plus installed.

For my typing test, I put the $149.99 MX Mechanical Mini up against $74 Keychron’s K3. Logitech’s keyboard is a lot more expensive, but the form factors of the two keyboards are very similar, and I suspect they’ll appeal to a similar kind of typist. Logitech’s keyboard was the clear winner in terms of feel. It might not offer the same sublime typing feel as a premium keyboard like Keychron’s Q1, and its spacebar rattles a little, but it’s streets ahead of the comparatively mushy feeling of the K3. It feels crisp and clean, and I can (and have) happily typed on it for hours.

Speaking of which, here’s a typing sound test:

Here's what typing sounds like on the Logitech MX Mechanical Mini with brown switches:

I was also surprised by how flimsy Keychron’s keyboard feels in comparison to Logitech’s MX Mechanical Mini. Pick up Logitech’s keyboard, and it feels sturdy, refusing to flex if you try and bend it. It feels nice and durable in a way that Keychron’s (admittedly cheaper) keyboard just doesn’t. If you’re looking for where that extra $75 is going, a lot of it can be found here.

Logitech seems to have a very specific kind of mass market user in mind for its MX Mechanical keyboards. This isn’t a mechanical keyboard for enthusiasts who prize flashy designs, hot-swappable switches, and full customizability.

Instead, its low-profile design and sensible feature set make it seem like a more premium alternative to Logitech’s own MX Keys keyboards, which have the same layouts with laptop-style switches and are slightly cheaper at between $99.99 and $149.99 — or even Apple’s range of Magic keyboards, which start at $99.

The Logitech MX Mechanical Mini is a solid, sensible keyboard, with plenty of useful features to get the most out of it. But don’t expect it to offer the most premium typing feel around or offer the kinds of customizability that enthusiast mechanical keyboards are known for.

Agree to Continue: Logitech Options Plus

It’s perfectly possible to use Logitech’s mice and keyboards without its Options Plus companion software. But the software is essential if you want to customize your accessory.

Doing so requires you to agree to:

There’s also an option to share diagnostics and usage data with Logitech. You can create a Logitech account to save and sync between computers, but it’s not compulsory.