I first tested the $99.95 Withings Sleep back in 2018 when it was known as the Nokia Sleep. It was a neat concept at a time when most consumer sleep trackers were either absurdly expensive or wrist-worn. It wasn’t perfect, but in the intervening years since Withings left the Nokia umbrella, there have been enough changes issued to the Sleep that I wanted to re-test the device to see what had changed — and what hadn’t.

Design-wise, barely anything has changed. It’s still a 25 by 7.5 inch device that you plug into an outlet and then slip under your mattress at chest level. The gray fabric cover is still the same, except it now reads Withings instead of Nokia. The appeal here is you are able to track your sleep by just lying on your mattress like you always have — and without having to wear an uncomfortable device.

Setup is also the same. You still have to pair to your phone over Bluetooth as well as connect the device to Wi-Fi. Smart home integration via IFTTT hasn’t gone anywhere, so you can still control your lights and thermostat. By and large, the gist is that the physical product and many of its features haven’t changed much.

Our review of Withings Sleep 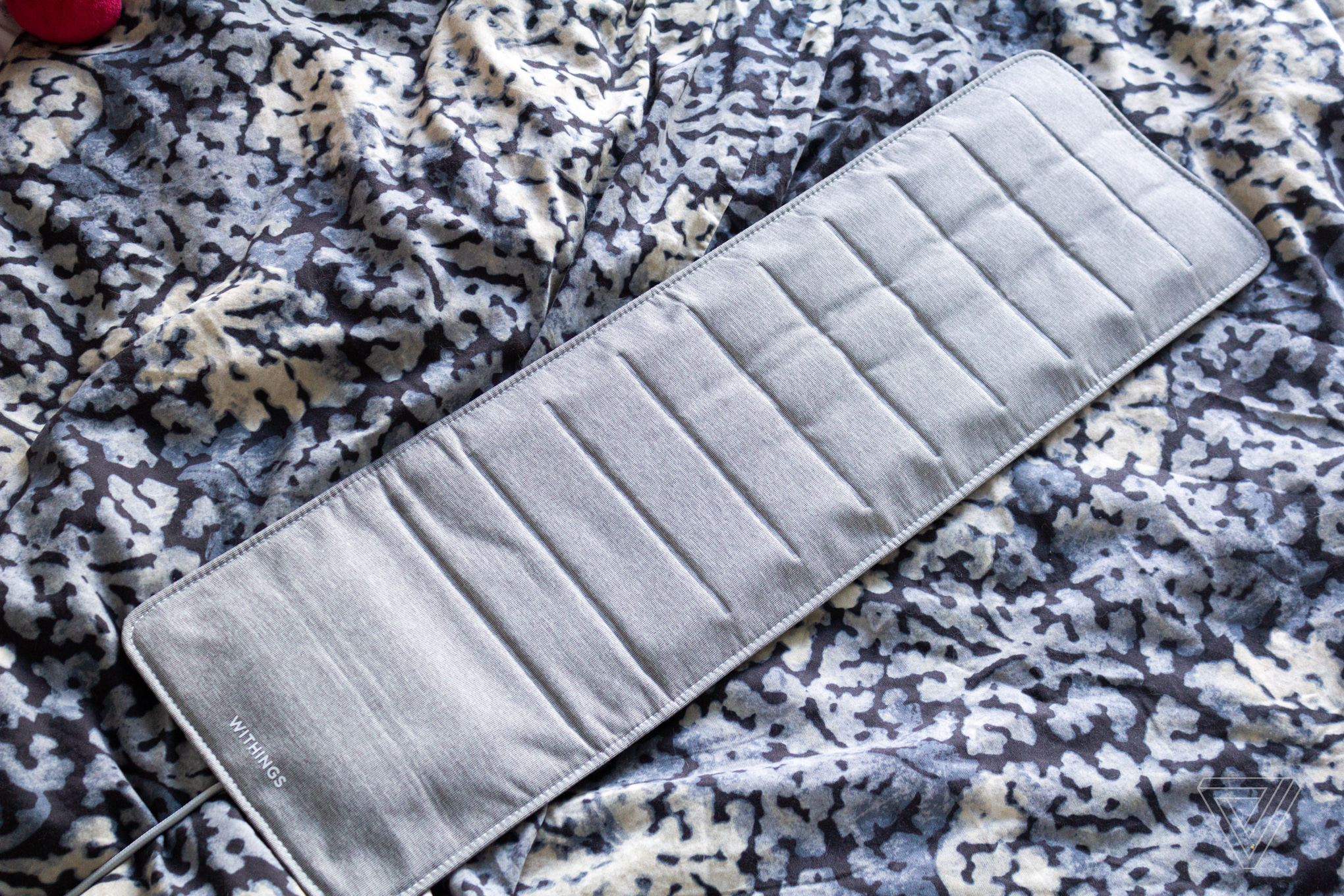 What has changed, however, are the metrics it tracks and its overall accuracy. Withings now tracks breathing disturbances in addition to snoring and can generate a PDF Sleep Diary that gives you a bird’s-eye view of your sleeping patterns over time. Withings defines breathing disturbances as “interruptions in breathing patterns,” and fewer is better. That doesn’t mean it can diagnose sleep apnea, however. There is a higher-end version of the Sleep called the Withings Sleep Analyzer, which does claim to have medical-grade sleep apnea detection. It’s also not available for sale in the US, as it doesn’t have FDA clearance. For now, the Analyzer is a European Union-only device.

However, when testing the Sleep, this distinction sort of felt like a matter of semantics. According to the Mayo Clinic, sleep apnea can be a serious sleep disorder characterized by repeated starts and stops in breathing — an interruption, if you will. Although there are explicit warnings that this isn’t meant to be a diagnostic device, it feels like Withings is skirting awfully close to the line. This is especially true since snoring is a possible indicator of sleep apnea, and the Sleep tracks snoring.

Even so, in testing, the breathing interruptions and snoring detection were fairly accurate. When I last tested the Sleep, it never detected my snoring, even though my roommate insisted she heard me snoring loudly multiple times. I don’t snore quite as much these days — or as loudly; I know because I’ve recorded my snoring via the Sleep Cycle app and the Samsung Galaxy Watch 4. But, this time around, the Withings Sleep was able to catch a few nights where I did snore. That’s a noticeable improvement from the last time around.

The Sleep Diary feature was also helpful — though be warned that it takes about a month to get a clear view of your sleep patterns. You can set the diary to report a custom time period or on a quarterly or monthly basis. In the report, you’ll find average heart rate during sleep, average sleep duration for weekdays and weekends, latency, efficiency, bedtime and wake-up times, and stats related to snoring and breathing interruptions. There’s also a visual representation of the time you spent in bed, time spent asleep, and extended times out of bed.

I can get this data from a number of sleep trackers, but even popular options like a Fitbit or the Oura Ring don’t let you easily view your patterns over a long period of time — let alone provide you averages in one place. You have to dive into individual menus and sort of piece it together that way. Some, like Fitbit, put advanced sleep data behind a paywall, and there’s no such issue here. The only thing I didn’t love about the Sleep Diary was how long it takes to create. Sometimes I had to try a second time because it would crap out before it was done calculating. Then again, this is a pretty comprehensive report, and it makes sense: the longer the time period, the more time it may take to generate.

In general, I liked the tweaks and improvements Withings added here. There were a few minor annoyances, however. For starters, syncing your data in the morning is slower than it should be. Sometimes I’d leave my phone on the bed while I got up to start my morning chores. My data mostly loaded without problems during that time, but there were two instances where I had to re-pair the device. The first was because my wily dog knocked the plug out of the socket. The second time, the device just wasn’t working, and I have no idea why. Whenever you re-pair the device, it takes an additional 10 minutes to recalibrate to the thickness of your mattress. It’s something to keep in mind if you choose to take this device on a trip.

In terms of tracking, the Sleep largely corresponded to the Garmin Forerunner 255 — which I was testing simultaneously — and the Oura Ring. Of course, there were variations in my sleep scores and sleep stage data, but they weren’t wildly off base. The one thing I’d say the Oura Ring was better at was logging naps. The Sleep always said my naps were an hour long, but when I tapped to see more info, it gave me data for an entire night’s sleep. So I wouldn’t put too much stock in those reports. Otherwise, I saw a big improvement in detecting when you’re in bed but not asleep and whenever you wake up and get out of bed in the middle of the night.

Overall, I’d say this is an excellent, affordable option for anyone who hates wearing rings or trackers to bed. It’s not too complicated, but at $100, you’re getting a good feature set — especially if you’re someone who wants to view your sleeping patterns in one easy report. Also, it’s great to see that Withings is still bringing new features and updates years later. There are still a few quirks to the device, but none are so bad that I’d tell people to “sleep on it.”

To use the Withings Sleep, you must pair it with an iPhone or Android smartphone. That includes the phone’s terms of service, privacy policy, and any other permissions you grant. You may also grant optional permissions to the Health Mate app, including Bluetooth, voice assistants, notifications, background app refresh, and cellular data.

By setting up the Withings Sleep, you’re agreeing to: