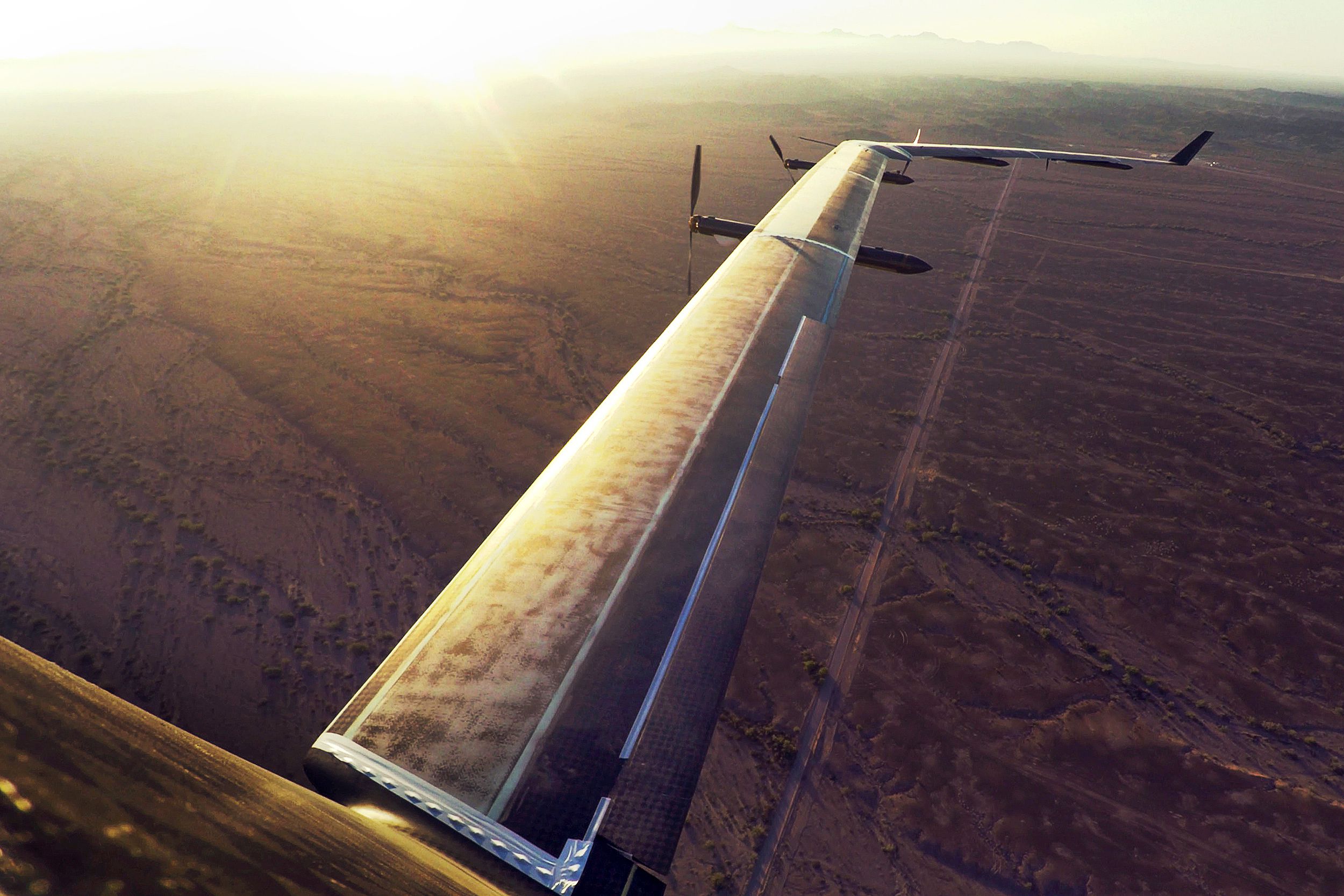 Inside the test flight of Facebook’s first internet drone

At 2AM, in the dark morning hours of June 28th, Mark Zuckerberg woke up and got on a plane. He was traveling to an aviation testing facility in Yuma, AZ, where a small Facebook team had been working on a secret project. Their mission: to design, build, and launch a high-altitude solar-powered plane, in the hopes that one day a fleet of the aircraft would deliver internet access around the world. 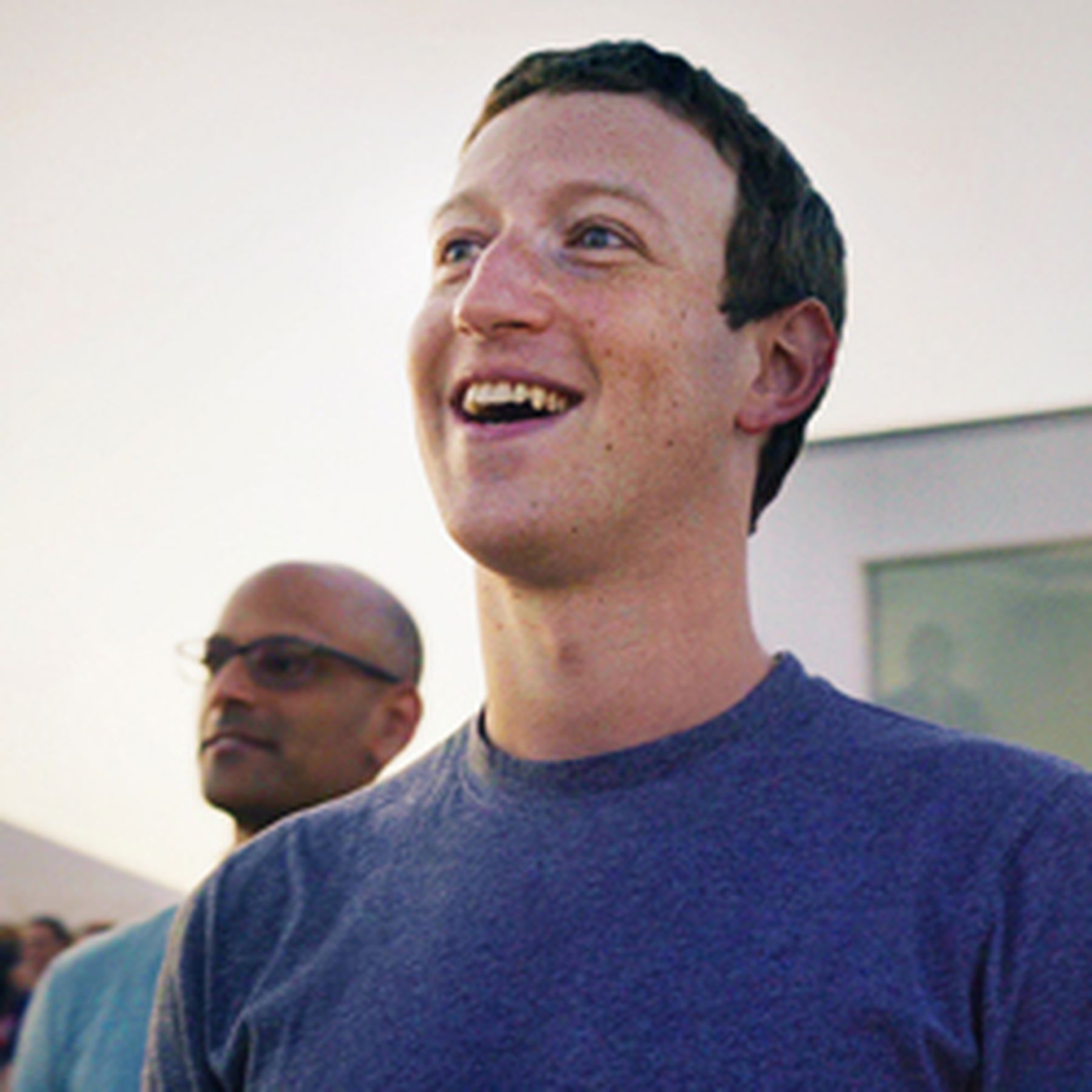 Zuckerberg arrived at the Yuma Proving Ground before dawn. “A lot of the team was really nervous about me coming,” Zuckerberg said in an interview with The Verge. A core group of roughly two dozen people work on the drone, named Aquila (uh-KEY-luh), in locations from Southern California to the United Kingdom. For months, they had been working in rotations in Yuma, a small desert city in southwestern Arizona known primarily for its brutal summer temperatures.

On this day, Aquila would have its first functional test flight: the goal consisted of taking off safely, stabilizing in the air, and flying for at least 30 minutes before landing. “I just felt this is such an important milestone for the company, and for connecting the world, that I have to be there,” Zuckerberg says.

For Facebook, Aquila is more than a proof of concept. It’s a linchpin of the company’s plan to bring the internet to all 7 billion people on Earth, regardless of their income or where they live. Doing so will lift millions of people out of poverty, Zuckerberg says, improving education and health globally along the way. But it will also enable the next generation of Facebook’s services in artificial intelligence, virtual reality, and more. This next era of tech will require higher bandwidth and more reliable connections than we have today, and drones can help deliver both. The road to a VR version of Facebook begins where Aquila leaves the runway.

As the Sun rose over the desert, a crane lifted Aquila onto the dolly structure that would propel it into the sky. The drone has a tremendous wingspan: 141 feet, compared to a Boeing 737’s 113 feet. And yet Facebook engineered Aquila to be as light as possible to permit ultra-long flights. Built with carbon fiber, the latest iteration of the drone weighs around 900 pounds — about half as much as a Smart car.

On the ground, Facebook's employees were elated; some wiped away tears

A remote control operator activated the dolly, and Aquila began rumbling down the runway. The plane is attached to the dolly with four straps. When it reached sufficient speed, pyrotechnic cable cutters known as “squibs” cut through the straps, and Aquila lifted into the air, where it floated up its test altitude of 2,150 feet and stabilized. On the ground, Facebook’s employees were elated; some wiped away tears. “It was this incredibly emotional moment for everyone on the team who’s poured their lives into this for two years,” Zuckerberg said.

Watching from below, Zuckerberg was struck by Aquila’s deliberate, unhurried pace. “It flies really slowly,” he said two weeks later, at Facebook’s headquarters in Menlo Park, CA. “Most times when people are designing planes, they’re designing them to get people or things from place to place, so there’s no real advantage to moving slowly. But if your goal is to stay in the air for a long period of time, then you want to use as little energy as possible — which means going as slowly as you physically can, while not falling out of the air.”

Okay — but why a plane? There are lots of ways to bring the internet to people that don’t involve designing your own drone.

There are satellites, which are good at delivering internet access to wide geographical areas. But they’re only effective in areas with low population density — too many users can gobble up the bandwidth in a hurry.

There are cellular towers, which excel at connecting dense urban populations. But building enough cellular towers to cover the entire Earth is considered too expensive and impractical, even for Facebook.

If the drones could be built cheaply enough, they would one day dot the skies

In 2014, Zuckerberg wrote a paper analyzing various methods of internet delivery. High-altitude drones, he said, could serve a huge audience of people who live in medium-sized cities or on the outskirts of urban areas. They fly closer to the ground than satellites, meaning their signals are stronger and more useful to larger populations. And they fly above regulated airspace, making them easier to deploy.

If Facebook could build a drone that gathered most of its power from the Sun, Zuckerberg reasoned, it could fly for 90 days. A laser communications system could deliver high-speed internet to base stations on the ground, connecting everyone within 50 kilometers. The planes would be easier to maneuver than, say, balloons — a method embraced by Google, which has embarked on its own global connectivity crusade with Project Loon. (Last year Google challenged Facebook more directly with Project Titan, a solar-powered internet delivery drone of its own.) If the drones could be built cheaply enough, they would one day dot the skies, and become a critical piece of the global internet infrastructure.

And so 26 months ago, Zuckerberg set an ambitious goal: to release a functional version of Aquila in just a couple years. He personally recruited experts from NASA’s Jet Propulsion Laboratory and MIT’s Media Lab, among other places, to bring his vision to life.

As part of the project, Facebook spent nearly $20 million to acquire the team behind Ascenta, an aviation consultancy led by Andy Cox. Cox is a mechanical engineer who previously worked on a team that kept a solar-powered drone in the sky for two weeks — still a world record. After Facebook acquired his consultancy, Cox became Zuckerberg’s top lieutenant on the Aquila project. The team works out of a warehouse in Bridgewater, 150 miles west of London.

As recounted in Wired earlier this year, building a working model of Aquila put the team in daily battle with the laws of physics. Early on, it attempted to launch Aquila with a hot-air balloon. A planned test flight date of October 2015 was pushed back, and then pushed back again. Attempts to fly a 27-foot scale model of Aquila were hampered by El Niño storms.

But by June 28th of this year, the team had overcome those hurdles. At cruise altitude, Aquila was using just 2,000 watts of energy — the equivalent output of five strong cyclists, Zuckerberg says. The company hoped Aquila would successfully remain aloft for half an hour. But it was so stable that they kept it in the air for 90 minutes before landing it safely.

In its first flight, Aquila exceeded engineers’ expectations for its energy efficiency. More test flights are planned, aimed at flying Aquila “faster, higher, and longer,” says Jay Parikh, Facebook’s vice president of engineering, in a blog post today. And then Aquila will have its next big test: flying with the “payload,” as Facebook calls the laser communication system that a team is building in Woodland Hills, CA. In July 2015, the team announced that its lasers could deliver data at tens of gigabits per second, about 10 times faster than the previous standard. And the lasers are quite precise, able to target an area the size of a dime from 10 miles away. (The lasers connect with base stations on the ground to supply internet access.) Facebook says the system has performed well in independent tests.

When will a fleet of Aquila drones bring data to the world? Facebook won’t say. There are several technical challenges remaining in getting Aquila to reliably fly 90-day stretches. The team hasn’t yet implemented solar panels on the prototype — the test flight plane ran using batteries only. The team is still working out how to build batteries with a density high enough to sustain lengthy missions. Then there’s the cost — Facebook says Aquila needs to be much cheaper if the world is going to deploy a fleet of them. “We need to develop more efficient on-board power and communication systems; ensure the aircraft are resilient to structural damage to reduce maintenance costs and able to stay aloft for long periods of time to keep fleet numbers low; and minimize the amount of human supervision associated with their operation,” Cox wrote in a blog post today.

Aquila is also likely to face regulatory obstacles, which could rival the laws of physics in terms of the challenges they present. Facebook and Google have teamed up to work with authorities, such as the Federal Aviation Administration, to get permission for test flights and obtain access to the spectrum they need to serve data.

Facebook says it doesn’t plan to use Aquila to build its own cellular network. Instead, Zuckerberg says, it wants to license the technology — or even give it away to telecommunications companies, governments, and nonprofits. In emergency situations, he says, Facebook could direct its fleet to troubled regions to bolster internet access for hospitals and nonprofit centers.

But it remains unclear how governments will receive Facebook’s latest idea for connecting the world. The company’s efforts at diplomacy have sometimes been clumsy; Indian regulators banned Free Basics, Facebook’s effort to provide some internet services for free, on the grounds that giving the company control over the included services violates net neutrality. Bringing more people onto the internet, after all, is a way of bringing more people onto Facebook — and regulators have worried that the company’s end goal is to simply replace the open web for most users, while reaping the rewards in advertising dollars.

Zuckerberg says the company has learned from its failure in India — one he hopes is temporary. “We’ve learned a lot about how we need to interact with governments and the political system and regulators, and build support in order to have these things work. And I think we’ll take those lessons forward,” he said. Solar-powered planes will raise additional regulatory issues, he says. “But when I meet world leaders, a lot folks are really excited about this, because you want your people to be online, and you want more opportunities. And connectivity is one of the biggest ways that people get access to opportunities.”

The path forward for Aquila isn’t totally clear, and it’s bound to encounter more bumps along the way. But Zuckerberg is resolute: billions of people who can’t access the internet deserve it. And for Facebook to achieve his long-term vision, everyone is going to need access to more bandwidth than they have today. A single test flight represents a tiny step toward getting there. But it also gives Facebook a dramatic success to rally around.

“I think the future is going to be thousands of solar-powered planes on the outskirts of cities and places where people live, and that’s gonna make connectivity both available and cheaper,” Zuckerberg says. “And, I think, can help play an important role in closing this gap of getting more than a billion people online. This is an early milestone, but it’s a big one.”

Zuckerberg smiled. “It’s not something you necessarily expect Facebook to do — because we’re not an aerospace company,” he said. “But I guess we’re becoming one.”

Update, 11/21: Aquila experienced a structural failure during the flight, which led to a National Transportation Safety Board investigation. Facebook did not disclose the failure during our reporting of this story.