The popular social networking client for BlackBerry, Socialscope, is moving up. No, it's not getting out of beta (it's been years and there's still no version 1.0), but now there's an Android version on the way. A private alpha of the product was released on Friday (it's being called "alphascope," for now), and you can request access at its website now.

Socialscope made waves as one of the best Twitter clients for BlackBerry (not that there was much competition), and it has Facebook and Foursquare connectivity to boot. It looks from the screenshot below that the Android app will support these services as well as Instagram, which is particularly notable since there's no first-party Instagram client on Android. The theory of the software is that it's better to use one all-encompassing social networking app instead of separate ones for each service. We're interested in seeing what's offered — and if it'll be enough to unseat Tweetdeck and Seesmic, which offer similar functionality. Hit the source link to sign up for what's called the "mobile inbox for your social networks," but beware that it might take a while to get access — Socialscope warns when you sign up that response has been overwhelming. 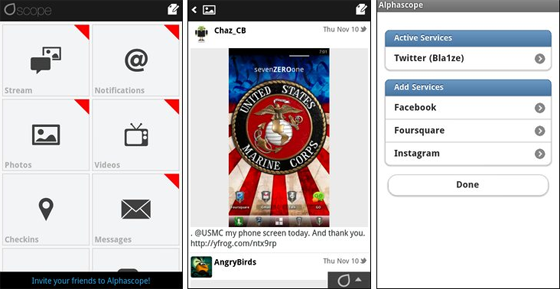