We were highly skeptical of the first I'm Watch teasers that started to appear on tech blogs in the summer of 2011. Our reasons were simple: first, the watch was demonstrated using digital renders without offering any evidence that the product (and its curved touchscreen) was real. What's more, it closely resembled a combination of the iPod nano + LunaTik watch band making it seem very much a work of fan fiction. Dubiously, the company was also enticing people to hand over their credit card information for a promised January delivery. And who in the hell is this previously unheard of Italian company proposing such a beautiful Bluetooth smartwatch built upon Android? 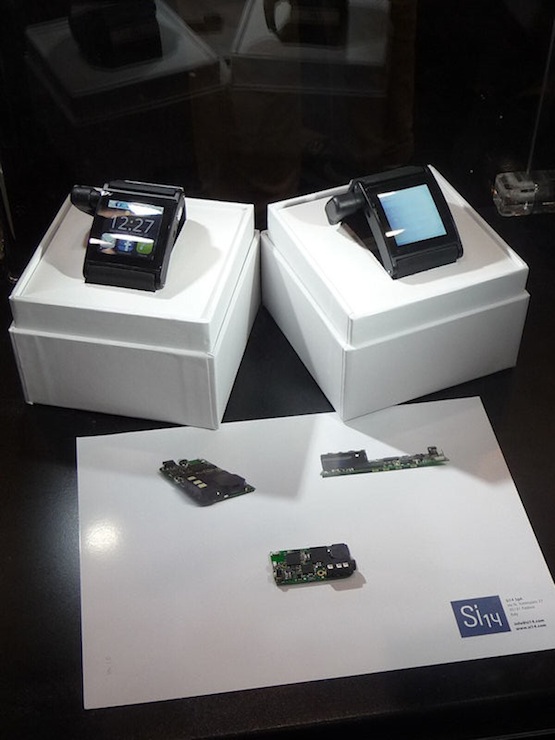 Today we're feeling confident enough in the product to share Blue Sky's latest promotional video after seeing a working prototype (pictured above) put on display at the ARM TechCon 2011 show in Santa Clara, California. Like the Kindle Fire, I'm Watch is built around a custom version of Android, version 1.6 in this case.

The watch features a 1.54-inch curved capacitive TFT LCD with 240 x 240 pixel resolution, a first of its kind according to the company. It's powered by a Freescale IMX233 application processor with 64MB of RAM and 4GB of flash storage for your media. It also packs in Bluetooth 2.1 + EDR for smartphone tethering and a 450mAh Li-Po battery that lasts about three hours on speakerphone use or up to two days in standby. Naturally, it also includes a mic, speaker, and headphone jack. Note, the I'm Watch, like Sony Ericsson's LiveView, does not include a cellular radio (or SIM slot). The company claims compatibility with iPhone 3GS (with iOS 4.3 or superior), iPhone 4 / 4S, "Android phones" (all of them?), and then Blackberry and Windows Phone 7 sometime in 2012.

Sounds great, right? Unfortunately, the prototype used for demonstration purposes suffers from some noticeable lag and failed touch registrations. Neither the industrial design nor the UI are as smooth and slick as the video renders make it appear. While we're hoping for the best, we're also keeping our wallets firmly in our trousers until we can get hands-on with a production device closer to the January 2012 launch date. Prices start at €299 for the base I'm Color model before topping out at €9,999 for a jewel encrusted version. The company is also planning an I'music subscription music service with on-demand access to "millions of songs," custom radio stations, and personalized playlists. I'market is, as you'd expect, an app store for downloading apps suitable to the device's tiny display. To call the undertaking "ambitious" would be a gross understatement.

The company plans to provide additional details at CES 2012. Until then, check out the prototype video below from our friend Charbax.