The Appeals Court for the Federal Circuit, which handles all patent-related appeals in the US, has just revived one of Apple's patent claims that could block sales of Samsung's Galaxy Tab 10.1. While upholding the lower court's other rulings in favor of Samsung, the appellate court did reverse a portion the district court's decision from December, which held that a prototype 1990s Knight Ridder device invalidated Apple's design patent — D504,889 — on the iPad. The lower court had denied Apple's request for a preliminary injunction against the Samsung Galaxy Tab 10.1 based on this perceived invalidity, and Samsung was able to continue selling the tablet in the US. With today's decision by the appeals court, Apple's infringement claims against the Galaxy Tab 10.1 are certainly strengthened, but it's unclear just how much value that will really add to its case in the end.

"We hold that the court erred in its analysis of the validity issue."

In comparing the Knight Ridder device to the iPad design patent, the appeals court noted "substantial differences in the overall visual appearance" of the devices, including the fact that the Ridder tablet had a wider and asymmetrical bezel design, and a screen that failed to match the iPad's look of an "unbroken slab of glass extending from edge to edge on the front side of the tablet." The court provided the following visual comparison (the Knight Ridder tablet is referred to as the "1994 Fidler," after the inventor's name): 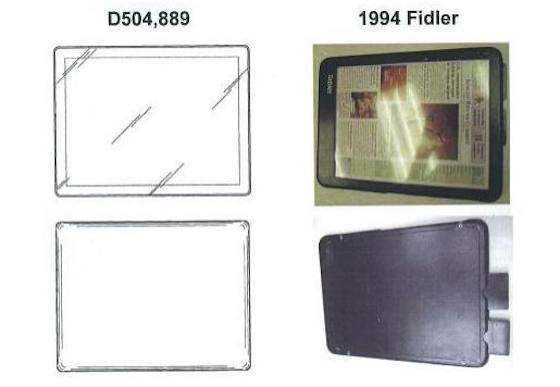 While it's significant for Apple to get a formal appellate ruling that the Knight Ridder device can't be used to invalidate the 'D889 patent, it may turn out to be a limited victory at this stage of its litigation with Samsung. Apple's preliminary injunction motion was filed last year and was therefore limited to the Galaxy Tab 10.1. That particular tablet never posed a real market threat to the iPad in the first place, and Samsung has recently replaced it with the Galaxy Tab 2 10.1. Because the new tablet wasn't in play back when the preliminary injunction motion was filed, today's appeals court ruling won't provide Apple with any immediate ammunition against the next-generation device. Besides, the Galaxy Tab 2 10.1 looks just like the Galaxy Tab 10.1N model that started popping up around the world last November, and we've already seen Samsung successfully convince other courts that the new design features sufficiently differ from Apple's design rights on the iPad. Of course, Apple is moving right along with several other patents in its case against Samsung, so we'll just have to see if today's ruling changes the complexion of the dispute in any meaningful way. And there's always the chance that the mediation scheduled for next week between executives of the two companies will result in a settlement that could render all of this moot — stay tuned.