As expected, Apple has added one more major US carrier to its iPhone lineup: Sprint. Available on October 14th with preorders on October 7th, the Sprint iPhone 4S marks the beginning of the company's "multibillion dollar gamble" to sell at least eight million iPhones a year and save itself from the downward slide that arguably began with the Nextel merger. It will be available with 16GB, 32GB, or 64GB at prices ranging from $199, $299, and $399 respectively.

Specs on the Sprint iPhone 4S are identical to the Verizon version: EVDO for 3G, the A5 processor, 8-megapixel camera capable of shooting 1080p video, and the Retina Display. The Sprint iPhone 4S is also a world phone, including a GSM radio for data and voice outside the US. WiMAX 4G is not included, but given that no other carriers will have a 4G-enabled iPhone 4S, that's not really a huge liability. Sprint will continue to offer its unlimited plan, sans data throttling or data caps - a differentiation the carrier surely hopes will help it poach enough customers to turn things around.

That leaves T-Mobile as the last of the big four US carriers to not offer the iPhone. In a post on T-Mobile's corporate blog, Chief Marketing Office Cole Brodman said that T-Mobile thinks "the iPhone is a great device and Apple knows that we'd like to add it to our line-up." That doesn't look like it's in the cards in the near future.

It remains to be seen whether or not the iPhone will help out Sprint as a company, but it's certainly going to help out Sprint customers looking for an alternative to its Android offerings. Find a gallery of iPhone 4S pictures from the Apple event below.

Update: Apple’s iPhone site is also listing the iPhone 4 as "Coming soon" to Sprint, starting at $99 for the 8GB version. 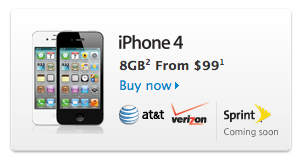