After successfully raising almost $1 million in funding on Kickstarter back in 2010, Scott Wilson is back with the LunaTik Lynk, an ultra-premium version of his iPod nano watchbands that literally kickstarted the nano watch trend amongst gadget nerds. Today, a cursory scan of the Apple store reveals a dozen imitators, but it was Scott's original TikTok band that was so prominently featured by Apple's own Phil Schiller during the unveiling of the seventh generation iPod nano, updated to include a total of 18 watch faces.

Although you might not know him by name, you're already intimately familiar with Scott's work. Scott and his team of designers at Minimal are the creative minds behind the slim Xbox 360, Kinect sensor, and Dell Venue Pro. More incredibly, it was Scott working with Microsoft's J. Allard who dreamt up the ill-fated Courier tablet. Prior to MNML, Scott was the Global Creative Director of Nike Watches which helps explain his fetish for intricate watch band design.

The new LunaTik Lynk ships in two flavors: the $129.95 Silver version or the $139.95 Blackout model that we received for testing. For all its mass, the Lynk is surprisingly lightweight even after the iPod nano is inserted between the two matte-aluminum sleeves. So light, in fact, that it immediately makes the band feel less premium in hand than it appears when visually inspecting it. 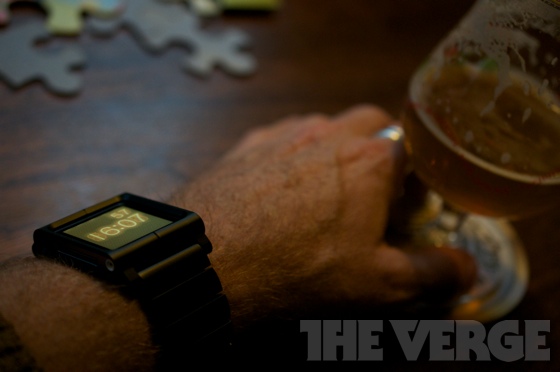 The Blackout frame is constructed of precision-machined aerospace-grade aluminum coated with PVD (Physical Vapor Deposition) to ensure the matte black finish remains durable with time. The inner band worn against the skin, however, is composed of a non-sticky silicone that also serves to hold the individual links of the band in place. The lightweight construction and silicone makes for a very comfortable band that doesn't constantly tug at the arm hairs or slide around the wrist like traditional metal bands might.

Unlike Scott's snap-in TikTok band design, the LunaTik Lynk, like the original LunaTik before it, is sold as a "conversion kit" requiring a bit of work to attach the iPod nano. It's the band you choose when you really want a dedicated iPod nano watch. 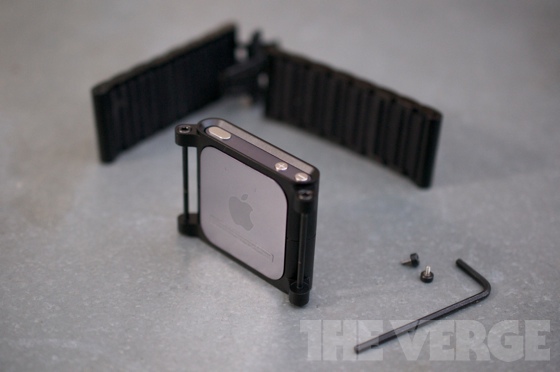 Assembly was intuitive and relatively painless, although as with all watches, you'll be dealing with tiny components that can be easily lost. The band ships with a pair of hex wrenches to unscrew the two long bolts that hold the two iPod nano mounting sleeves in place. The first bolt unscrewed with a single hex wrench but the second required the pair in order to prevent the free-wheeling rotation of the opposite-side nut. A spongy pad is integrated into each aluminum sleeve to create a satisfying bit of resistance that holds the whole assembly together even before the bolts are replaced. I had the watch band separated and reassembled with the iPod nano in less than five minutes — a procedure I'm sure I could reduce to one or two minutes should I ever wish to repeat it, assuming I can find the hex wrenches again.

The LunaTik Lynk also ships with a few extra links to add length to the band. A needle is used to press the pins to release each link in the band as you would with a typical aluminum watch band.

Once on the wrist you can rotate the iPod nano's clock to face you by touching two fingers to the multitouch display and giving them a twist. You'll want to set "Time on Wake" in the Date & Time general settings page to on (mine was on by default) to show your chosen watch face whenever you wake the nano. 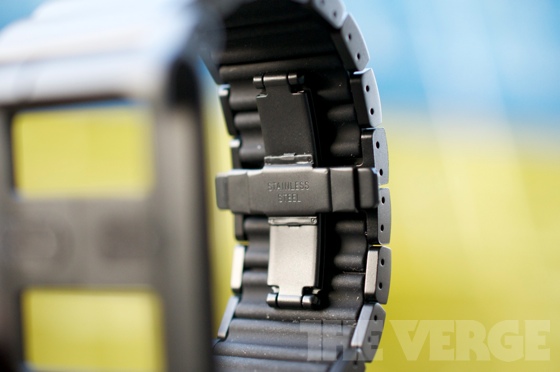 The band is perfectly symmetrical with a full butterfly clasp so there's no "right way" to wear it. The only thing you need to consider is the placement of the iPod nano buttons. I found the nano easiest to control with the volume and sleep buttons facing the fingers on my left hand with the headphone jack and ugly dock connector pointing towards my elbow. However, in this configuration the volume up and down buttons are reversed such that the plus is below the minus when looking at the watch. I tried flipping it around but my thumb is too large to comfortably manipulate the sleep and volume buttons (now facing my elbow) through the Lynk's control cutout.

The combined cost of both the nano and Lynk band will set you back at least $258.95 if you opt for the entry-level 8GB nano. An outrageous sum when you consider that purpose-built wrist computers like the Motorola's MOTOACTV and WIMM ONE cost $249.99 and $299, respectively. In that regard, little has changed since Nilay reviewed the nano as a watch last year. While we understand the undeniable appeal of wearing the nano as a watch, particularly now that Nike+ is an integrated feature (no dongle required), we keep wishing it could interact with our phone over Bluetooth like Sony Ericsson's LiveView, for example. 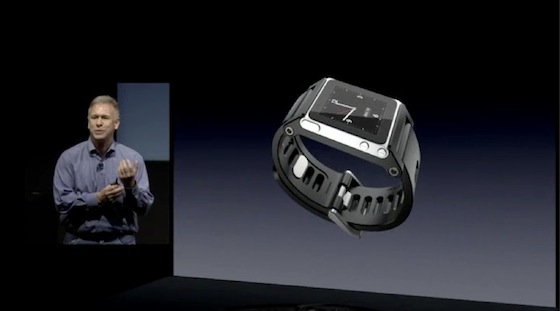 The LunaTik Lynk is akin to wearing a full-length mink coat to the high school homecoming dance. If you can pull it off, great, more power to you. But for me, Scott's $39.95 TikTok band is still the ideal solution for iPod nano watch enthusiasts. It's premium enough for the iPod nano yet allows you to pop the nano out of the band for quick trips to the gym or whenever the mood strikes.

LunaTik Lynk is compatible with the 6th and 7th generation iPod nano and is available now for preorder with shipments expected to begin the week of December 5th.