A modern language could be a boon for young coders

The biggest reaction from the crowd at WWDC today wasn’t for a shiny new product or even a cool new app. Instead, the news that Apple was introducing its own programming language, Swift, got a full-throated roar of appreciation from the thousands of developers in attendance.

Even without knowing a thing about programming, it's easy to understand this is a big deal: Apple's current language of choice, Objective-C, has been in the mix for Macs since the launch of OS X, and for iPhones and iPads from day one. For Apple to throw out the developer playbook across its entire product portfolio suggests there’s a big change afoot — and many devs aren’t sad to see it happen. "[Objective-C’s] a real pain," says Alex Chung, the co-founder of Giphy, who has created multiple iOS apps. "If you’re off by one character it all falls apart. It’s just really old school, you know, it’s like speaking Latin." 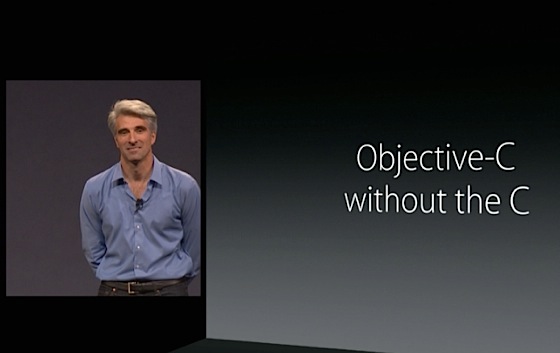 Swift is trying to borrow the best elements of moderately newer popular languages like Python and Javascript. "These are just more modern, colloquial languages that more developers today understand. They are easier to learn, and things don’t break as easily in them," says Chung.

Compared to the more complex Objective-C, the drawback of these simpler languages is performance — but Apple says Swift will mean a no-compromise solution. "Swift seems like it finally gives the developers in the iOS world the ability to do the things you have been able to do in the scripting world but without the penalties," says Daniel Doubrovkine, the head of engineering at Artsy. "That’s if it delivers on its promises, and others have promised and failed. But the fact that Apple is behind it gives me a lot of hope its the real deal." 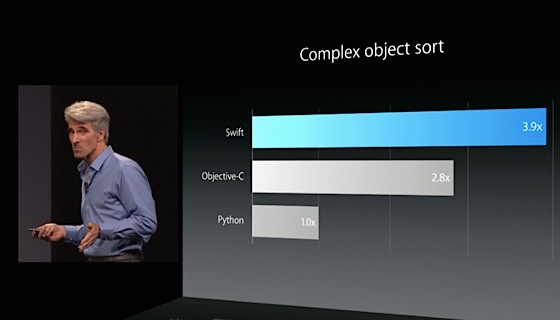 The other big idea behind Swift is that programmers can write their code and see the results in real time. In the old paradigm, developers write line after line of code in a text box, then compile those results — sometimes a lengthy, painful, productivity-denting task — and wait to see the end result. The product and the process were distinct from one another. With Swift, they can tweak a parameter or algorithm and watch the changes happen right away in the same coding environment. Theoretically, this means developers can toy with concepts faster and make what they’re trying to make in less time.

"The live coding concept is really the future," says Jeremy Olson, the founder of the app development company, Tapity. "It’s got the dynamic stuff you would see working in web development, but with Swift it also works in deep code and algorithms."

"This makes iOS development way more accessible."Both Chung and Olson say Swift will lead to a far deeper pool of developers focused on Apple products — and with them, a lot more apps. "The big story is that this makes iOS development way more accessible," says Olson. "It’s not just because the code is easier to master, but also the live stuff. It’s gonna create a much nicer learning environment." Of course, there’s no shortage of apps on iOS as it is — and with more developers, this could all lead to a new glut of crappy apps to sort through. "This is meant to bring in a whole new breed of young coders, which means an already crowded market is gonna get a lot worse," says Chung.

Given the continued expansion of Apple’s smartphones and tablets into new parts of the world, however, most developers aren’t too concerned. "There is plenty of room for more developers," says Doubrovkine. "If this works like they say, and makes my life easier, than I think it’s a very good thing."

Will the arrival of Swift make a difference in the day to day lives of the average consumer? It won’t — at least, not in the same way countless user-facing features in iOS 8 and OS X 10.10 will. But it does stand to take a lot of the busy work away from the developers making the apps we use every day — and if those devs are able to become more creative and efficient, Swift might have the biggest impact of all.