Share All sharing options for: Kno for iPad 1.5 adds 'Quiz Me' and 'Journals,' web and Facebook apps also announced (video) 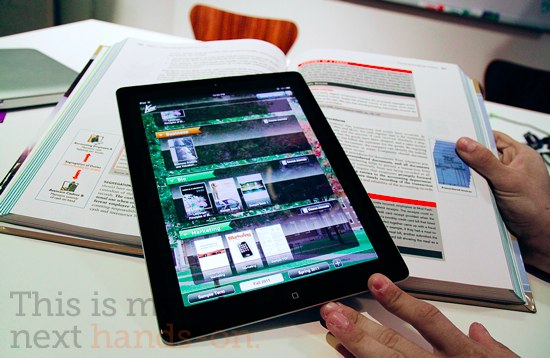 A lot has changed for Kno since it first showed off a dual-screened e-reader at the D8 conference just over one year ago. In a world where the iPad is now king of a constantly-expanding tablet market, the company has wisely shifted its focus away from hardware to software. Today, Kno for iPad 1.5 is hitting the iTunes App Store, and it brings with it a sleek way to organize textbooks and PDFs, some nifty features to make sure you're actually paying attention, and a Journal addition that could shape up to be Cliff Notes for the the e-book generation. Click past the break for the lowdown on the next chapter of Kno's story.

Though Kno's iPad app is obviously designed with students in mind, it could become a general PDF reader of choice thanks to its myriad of features and neat interface — not to mention its low price tag of free. Books can be organized by course, which are further broken down into "terms." PDF files can be imported to the Kno app via the iOS "Open In…" dialog, which is present in Apple's native Safari and Mail apps. Double tapping any book opens a popup with page thumbnails for quick navigation to take you to the page of your choosing. Like we said, it's pretty sleek and could double as a regular PDF reader for non-students.

Kno is really proud of its "ingestion" technique, which takes EPUB or PDF files from publishers and converts them into Kno-friendly versions while maintaining the original's formatting, page numbers, and alignment. The original file essentially serves as the base layer with interactive features nested on top. The most substantial addition in this update is Quiz Me, which turns almost any image into an instant multiple choice test. Double-tapping on a diagram or picture enlarges it as an overlay and black boxes appear over labels that are then presented as multiple choice options. The mini tests log your attempts, score, and even give you a grade at the end. It's a nifty feature that works well, but only in cases where the text is not hardcoded into an image. 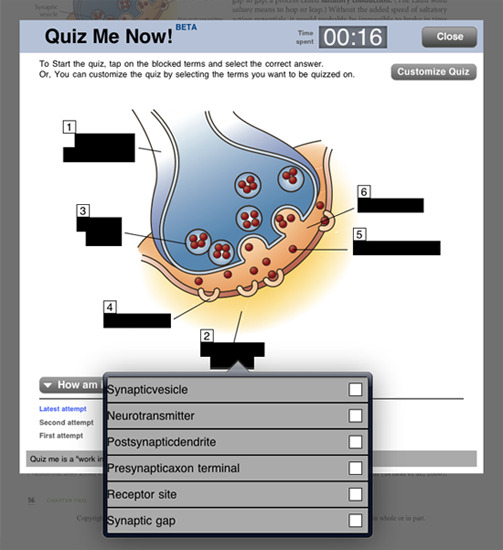 The next major feature is the Journal, which serves as a repository for all of the content you highlight or mark as important within a text. These Journals are textbook specific, though you can add further annotations once they're saved. Currently text notes can be added, but photos, videos, and audio recording are in development for a future update. A pen layer enabling hand-written notes via a stylus or finger is also something in the pipe. In our opinion, once social features are implemented, the feature could become a sort of Cliff Notes 2.0. Imagine sharing highlights with friends who have also purchased the same book or even audio recordings from class. If you've ever spent hours trying to pore through a dense chapter of financial accounting, you'll feel our excitement on this. Unfortunately due to licensing issues, you can't email or print material from Journal, but you also can't re-print or email a physical textbook page so that shouldn't come as much of a surprise. 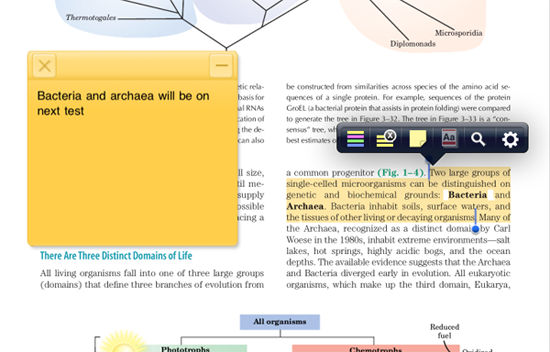 The iPad app also boasts a robust set of annotation tools for a real-life reading experience. Double tapping and dragging your finger highlights chunks of text. (Don't worry, you can change the color of the ink.) You can also add sticky notes and look up words on the web or Wikipedia from the same popup dialog. As far as books themselves, we're told that they won't clock in any larger than 2GB each, though most are "much less" than that. Still, it's important to keep in mind that if your iPad is already loaded up with a lot of music or video content, space for textbooks might be limited.

Kno for Web and Kno for Facebook are two complimentary services also making their debut today. They feature the same visual layout of the iPad app for organizing your texts, but lack the aforementioned Quiz Me and Journals features. Since they're HTML5-based, they should work on Android tablets though we couldn't test drive it for ourselves. We asked about plans for a native Android app, and couldn't get anything solid.

The updated Kno iPad app (and its accompanying web counterparts) has us excited about the future of e-textbooks, and even more excited about not having to carry physical ones. The company's simplifying the process for publishers, but we still think there's more innovating to be done from the outset on the content side before we see truly immersive electronic books designed for these new digital mediums. For now though, Kno's solutions are well implemented and a pleasure to use — and if it means ten pounds less in our backpacks on a daily basis, well, that's just icing on the cake.

Note: Jacob Schulman is an actual student. He studies business at the University of Pennsylvania using paper textbooks and real highlighters.