The clock (or calendar) has struck August 3rd, which means it's Samsung Galaxy Tab 10.1 software update day for those living in NYC. ( Samsung has confirmed that the OTA update will roll out to all US Tab 10.1 owners starting on Friday, August 5th.) As promised, I took the 1 train up to the store and had my review unit sideloaded with the TouchWiz UX software. So, does it completely ruin the stock Honeycomb experience or does it add some useful features and enhancements? Answers after the break.

The update includes the following features. Screenshots of each sprinkled below thanks to the new handy screenshot button! 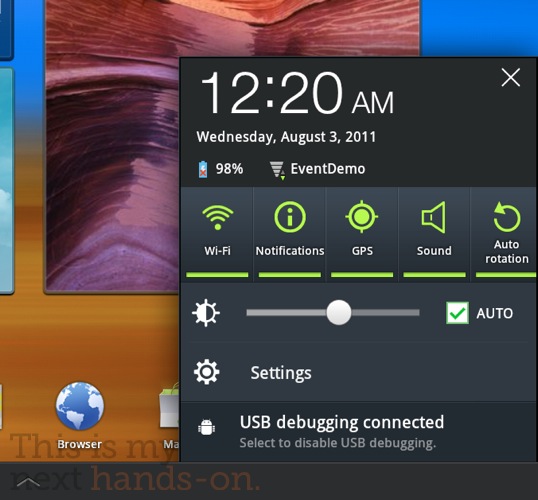 Yeah, all those things sound like pretty much the same thing, but let me try and explain the differences here. The Live Panels are really improved and retooled widgets and include new weather, social, and gallery panels. These look a lot like the widgets that are available on the original 7-inch Tab — they're bright and cartoony. They're really not my thing, but the good news here is that they can all be dragged to the garbage. I should note that these seem to considerably slow down the homescreen performance — removing them does seem to speed things up.

Those Live Panels aren't to be confused with the Quick Panel (pictured right), which lives in the bottom right corner of the homescreen and allows you to adjust a few more basic settings than stock Honeycomb — GPS, Bluetooth, Flight mode, etc. I have to say this is useful for avoiding the settings menu, and I'm not sure why Google didn't just add more info to this area from the start.

The Mini Apps Tray is, well, an apps tray that persistently appears along the bottom of the homescreen with apps that Samsung has specifically designed (Task Manager, Calendar, Pen memo, etc.). Sadly, there's no way to customize what apps appear here and it's also sluggish to pop up. However, I do like the fact that you can have these handy within any app and that they pop up as small overlying windows so you can toggle between then and the app below it. It's a neat idea in terms of multitasking, but the lag of both the apps and the tray is noticeable.

Sure, it's a steal of Apple's "Find My Phone" but I'm not sure why Google hasn't actually implemented something like this. Either way, Samsung is on the case and within the Tab 10.1's privacy settings you can turn on "find my mobile." It will prompt you to create a Samsung account and then start transmitting your Tab's location to Samsung Dive. The rest is fairly straightforward — log in with your Samsung account on SamsungDive.com and pinpoint your tablet on a map. According to Samsung, it should be hitting some US phones some time in the future (US Galaxy S II hint!?). 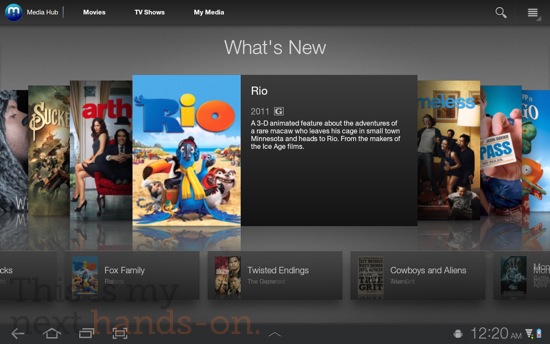 If you're familiar with these on Samsung's Galaxy S phones, then there isn't much new here. They have basically cleaned up a bit of the interface in the Social and Music Hubs to make them more full-screen friendly. The Media Hub has pretty much gone unchanged as well; you can rent movies / TV shows and it syncs across your Samsung Android devices.

This wasn't actually mentioned as a large update, but it's actually pretty cool. You can hold two fingers down on the tablet and then tilt it back or forward to zoom in and out. It's probably not going to replace pinch-to-zoom, but it's fun! Stay tuned for video.

Note: Our own Vlad Savov just informed me that this is already a feature on the Galaxy S II. (Insert complaint about not having the GSII in the US here!)

As we already knew, Samsung is preloading a bunch of third-party apps now too. There's Kindle, Words with Friends, as well as Swype. The Swype implementation seems solid -- you can adjust the size of the keyboard to your liking.

So, should you upgrade? For the most part, I don't think it hurts. You can easily tweak some of the additions — throw away the Live Panels, ignore the Hubs / the extra software — and the Quick Panel and Samsung Dive stuff seems quite useful. The only deal breaker may be that apps tray, which can't be removed and seems more laggy than incredibly useful.

However, Samsung has just told us that while this is an optional update, you won't be able to bypass this update and then get future updates. So, basically, when 3.2 hits, you'll be forced to adapt to some of these changes anyway — well, that is if you don't want to live on 3.1 forever. Either way, it's really not a polarizing update, but we understand that it's still a tough decision to make. Best of luck!

Note: I am still discovering new tweaks here -- updates on the way!