Well the presence of two versions of Internet Explorer in Windows 8 is certainly making a bit more sense today -- Microsoft has said that the Metro version of IE10 will be plug-in free, and thus, will not support Flash. However, the Desktop version still retains plug-in support. Why the move? Windows chief Steven Sinofsky explains in a blog post that "The experience that plug-ins provide today is not a good match with Metro style browsing and the modern HTML5 web." Of course, Flash isn't entirely dead on the OS, but it's surely a bold step on Microsoft's part to get away from the web standard.

I just tried it out on our Samsung Developer Tablet and that's pretty much exactly how things go down. In the Metro version, YouTube required a Flash plug-in and when I clicked over to Adobe's site I got a "this isn't supported" message. I did try the HTML 5 YouTube player, but, unsurprisingly, Google doesn't yet support IE10. However, I was able to watch a YouTube clip when I jumped back to Internet Explorer on the Desktop -- the plug-in downloaded just fine and video played quite well. As I've previously mentioned, it seems a bit confusing to jump between the Desktop and Metro UI and the compatibility of Flash in only one seems to hit home that point even more. Still, Microsoft's got a bit of time to explain where it's going with this. Hit the break for a short video demo of it all.

Update: Adobe VP Danny Winokur has officially commented on Microsoft's decision, saying that Flash will continue to thrive in the desktop browser, and we'll even technically see Flash code running in the Metro UI in the form of AIR apps.

Update 2: Yes, as many mention in the comments, there's a "Switch to Desktop view" in the Metro Browser. See pic below. 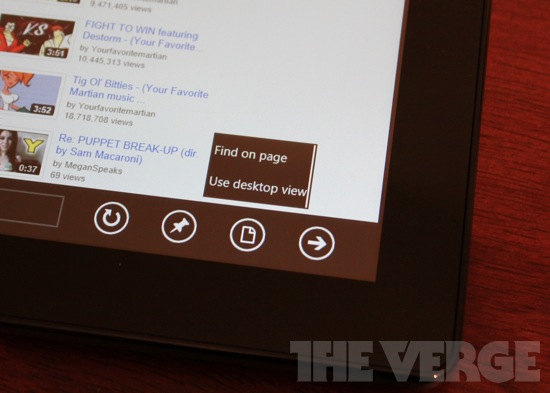 Update 3: I finally found a few YouTube HTML 5 videos that worked! So, yes, watching YouTube in the Metro UI can be done. Proof picture below. 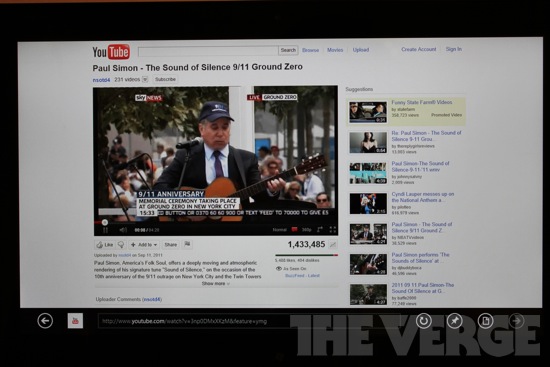