LG tries to create a universal AirPlay for apps

Share All sharing options for: LG tries to create a universal AirPlay for apps

LG today is releasing something it's calling "Connect SDK" to app developers. It's an open-source project that's designed to allow iOS and Android devices to stream video and photos to as many television devices as possible. At launch, it supports Roku, Chromecast, FireTV, webOS TVs, and some LG TVs. LG says that Apple TV support is also in the works, but isn't supported at launch.

The basic problem LG is trying to solve is fragmentation: each TV platform has a slightly different way of getting media streamed to it. Apple TV's AirPlay is the most popular, but recently Chromecast has garnered a lot of attention. Other attempts to compete with AirPlay like DIAL and DLNA have failed because of technical problems or lack of support. Streaming media is essentially a giant mess of failed standards and fragmentation — at least if you don't live entirely in the Apple ecosystem.

Can anything beat AirPlay?

Enter LG, which is trying to boost its TV credentials following the launch of its webOS televisions. Instead of proposing another new standard to replace all of the above, it's creating a software toolkit that supports as many of them as possible. The trick is that LG is abstracting all those different ways of streaming so that the developer only needs to use and implement a single set of commands like play, pause, and so on. LG has published a chart of supported features.

Unlike AirPlay, most videos streamed with the Connect SDK will come directly from the internet — just as the Chromecast works. However that's not a hard requirement. Because what gets streamed in most cases is based on HTML5, LG says that developers can easily set up local HTTP streaming services on their devices to stream local content. Despite the webOS history here, websites themselves can't directly set up streams to televisions as they can with Chromecast, but LG says it's looking into ways to make that happen. 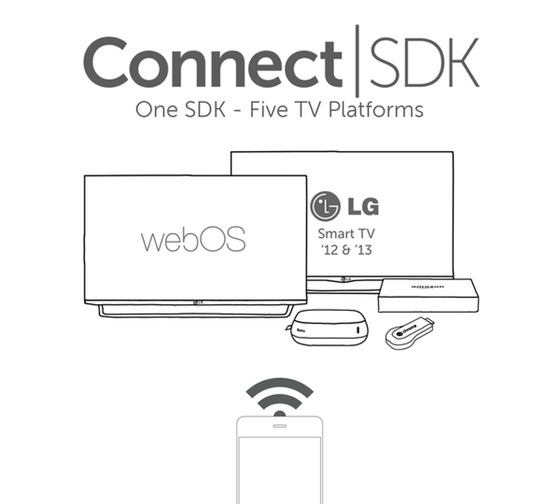 We got an early look at the Connect SDK in action and it does work as advertised, successfully sending YouTube videos and even triggering Netflix on a multitude of devices. However, it's not a perfect and perfectly seamless experience. Some older televisions took quite some time to get started (thanks to the fact that they were using the older DLNA standard). The Connect SDK handles TV discovery too, so apps will be able to automatically see media streamers on a given Wi-Fi network and then stream to them.

Few developers on board at launch

There are only two apps that are adding support for LG's SDK at launch: Plex and musiXmatch. That's not nearly enough to give the SDK legs, but LG is hoping that because its tools are free and open source, more developers will use them. The idea is simple: if it's just as much work to include LG's streaming tools as, say, Chromecast's, you may as well use LG's because they support (nearly) everything.

But again, they don't support AirPlay yet and that's a significant gap. But LG says that's coming and since the project is open source, theoretically any developer could add support to the SDK for any other stream standards that come along. LG's solution has other gaps — Miracast chief among them — so hopefully it'll see rapid development after release.

Video-streaming standards are like many other technology standards: messy, fragmented, slow to develop, and often left by the wayside. One way to deal with that is to develop a relatively enclosed, reliable ecosystem as Apple has done with AirPlay. The other is, apparently, to just try to support as many standards as possible, abstracting them into a single software kit. It's a brute-force approach, but it's probably the only one that makes sense.

LG created a quick demo video detailing a sample app using the SDK, which you can see below.

Correction: An earlier version of this story indicated that the Connect SDK worked with Samsung TVs. We regret the error.