Can faster innards and a new operating system keep the Torch alive?

For those who haven’t followed my smartphone history (and I suspect many haven’t), last December I gave up my BlackBerry Curve 8530 for an Android phone. It’s true, I was long a BlackBerry (and BlackBerry Messenger) addict, but as of December 2010, RIM left me with no other choice but to abandon ship. It had yet to provide, well, a modern-day smartphone — one with a great browsing and app experience. The Torch was its lone higher-end touchscreen option at the time, but the phone’s 624MHz processor made for a sluggish experience, its low-res screen was an eyesore, and the software was just too outdated. So, I threw off the mobile shackles (as I wrote at Engadget) and headed for the Droid 2.

The Torch 9810 is the successor to that original Torch and the third in a trio of new phones by RIM packing a new operating system — BlackBerry 7. Sure, from looking at it you wouldn’t necessarily know that RIM had made any changes, but the original pain points have been mended with a faster single-core 1.2 GHz processor, a higher resolution screen, and a zippier OS. Not to mention, the HSPA+ equipped phone is only $49.95 at AT&T (rather than the predecessor’s $199.99 starting price). So, is the new Torch the phone to pull me back to BlackBerry? Or is it too little too late? Read on for the full review. 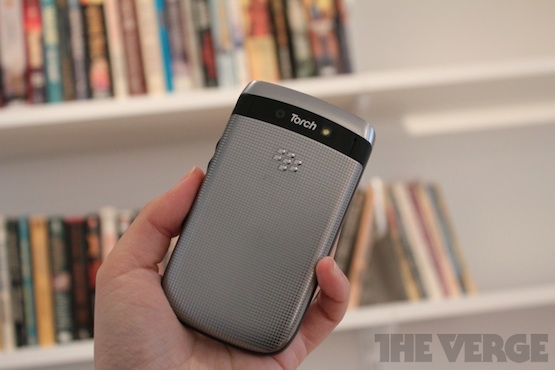 Josh gave the Bold 9930 high marks for design (he even called it "the most beautiful phone RIM’s ever made"). Well, you’re certainly not going to find me giving similar praise to the 9810. I actually never had an issue with the aesthetic of the original, and as a fan of portrait sliders, I quite liked the form factor. But now the design is just passé. The 5.68-ounce phone measures .57 inches thick, and in comparison to the new .41-inch thick Bold or any slider it’s just chunky in pocket. Of all things, RIM decided to change the coloring of the back cover; however, the new spray-paint-like silver is tacky. I should note that others around the office haven’t been totally nauseated by it and it does seem to come in a darker color.

No design awards will be going to the Torch — unless, of course, RIM pays off a judge somewhere — but there’s still something about BlackBerrys that feel more durable than most other phones around. I can’t put my finger on why that is since the 9810 is primarily made of painted plastics, but it really does feel like a phone that will wear well and survive my constant drops and dings.

In terms of buttons and ports, you’re still looking at the same selection. For those in need of a refresher, the 9180 has a 3.5mm headphone port, volume rocker, and camera / shortcut button on the right. The left houses its Micro USB jack and the top edge lock and mute keys. Below the screen you’ve got the good old optical trackpad which is still straddled by call, menu, back, and end / power buttons. 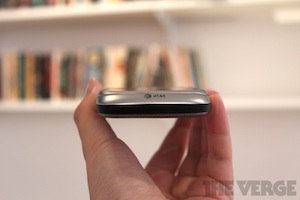 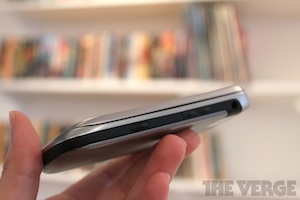 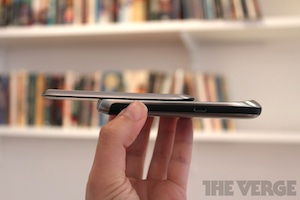 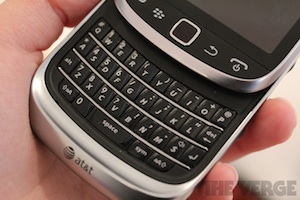 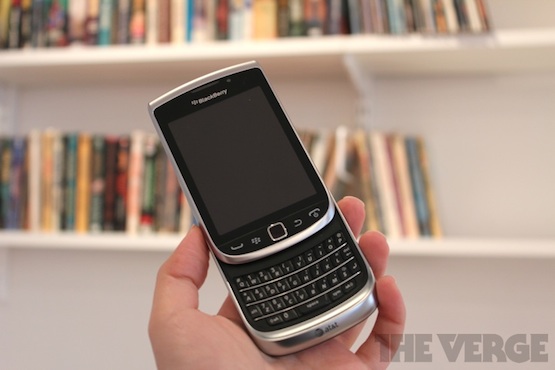 One of the biggest changes to the 9810 is the addition of more pixels. The phone now has a 3.2-inch VGA (640 x 480) display (up from the original’s HVGA panel). It’s not as crisp or dense on the pixels as the 2.8-inch, 640 x 480-resolution screen on the Bold, but it’s a nice step up from the previous Torch, that’s for sure. On top of that, it’s decently bright and responsive.

Much of the Bold 9930 review was full of praise for its improved physical keyboard — the perfect angle of the keys, the roomy spacing. But as I said in the design section, there will be none of that here. As you may expect, the backlit keyboard is the same as on the original Torch, but there’s a lot I wish the guys in Waterloo would have improved. I’m not saying I can’t type an email at a decent clip on the slightly slanted keys, I just wish they were less plasticky and spacing was more akin to something like Dell’s Venue Pro.

Of course, those that don’t feel like pushing down the slider always have the software keyboard. Now, I’m not sure why you’d do that since — as Jacob described in the Torch 9850 review – the software keyboard is one of the worst out there. Predictive capabilities and autocorrect are just not up to snuff and it also takes up more than half the screen in portrait mode and virtually the entire screen in landscape. But I don’t want to sound like a complete downer here: the physical keyboard on the Torch is solid enough, and if BlackBerry users put up with SureType and SurePress, they’ll surely be satisfied with this one. 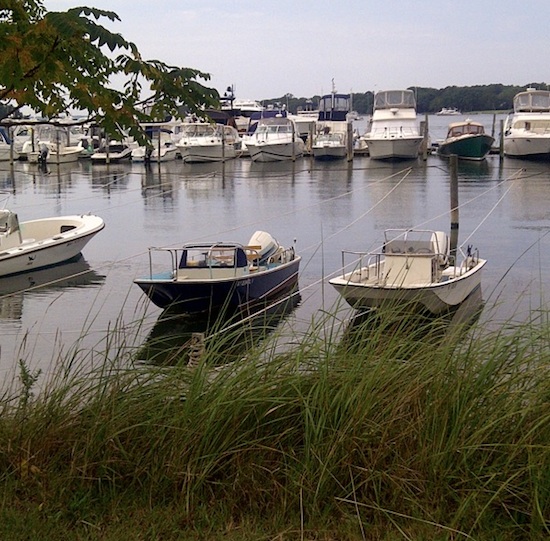 I’ll admit one of the most impressive parts of this handset is its 5-megapixel camera. The specs — an LED flash and autofocus — may be the norm, but pictures have been crisp and clear. The autofocus was quick in most instances and very few of my pictures have turned out blurry. It does struggle with low light situations, though outdoor shots were extremely well lit and balanced.

New to the phone is its ability to capture 720p video. Like the 9930, the image stabilization was very handy when trying to shoot while walking down the street or in the back of a cab. Even better, this one has autofocus and the ability to keep the flash light turned on while shooting in dimly lit situations. You just have to remember to turn the phone horizontally to record wider footage. All that said, the software camera menus and controls are outdated looking and having to dig through the sub-menu to select the video camera option is a huge pain. 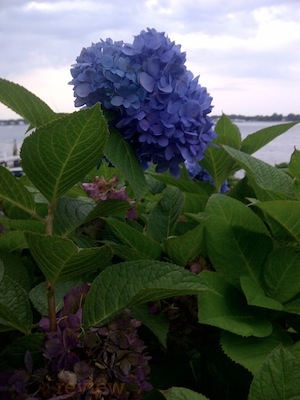 That lacking software keyboard a perfect segue into RIM’s new OS: BlackBerry 7. Josh covered the bases in his Bold review, and I agree with virtually everything he said. In comparison to OS 6, the software has been tweaked and noticeably polished in terms of speed, but it’s far from a total departure. Simply put, it’s been about a year since I’ve used a BlackBerry and it doesn’t feel like anything real has changed here — native and third party apps feel insanely outdated in terms of UI and functionality, digging through menus is still a chore, and very little about the OS feels like it was really meant for finger input. It’s like an old car: RIM keeps changing the parts and getting it detailed, but simply doesn’t replace the engine.

So, are there things about the OS I missed dearly? It was a surprise to me, but not really. I used to praise RIM for its email, but it still has issues with Gmail two-way sync. It won’t show sent messages and if you read an email on another Gmail client it won’t show as read on the phone. I do, however, still have a soft spot for BBM. The messaging service continues to be great for sending images or group chatting. The only thing I think has noticeably changed here is the browser. It’s much faster and the way it handles non-mobile sites is extremely improved. 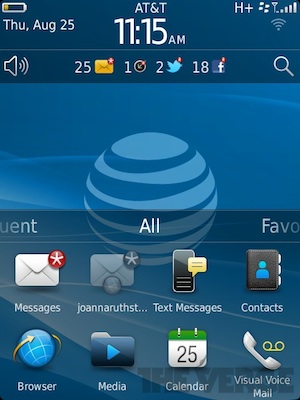 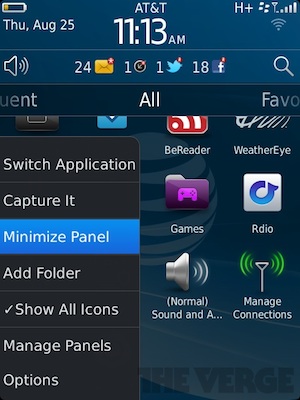 And that brings me to the biggest difference between this OS and OS 6: performance. Thanks to the 1.2GHz processor, 768MB of RAM, and an improvement in graphics (marketed as Liquid Graphics), the phone is incredibly nimble and renders on-screen menus and animations swiftly. Everything just feels faster and average BlackBerry users will feel the difference immediately, especially in the browser. Pages render quickly, and as Josh said, it finally just feels competitive. It’s a joyous thing to celebrate, but on the other hand, it’s sad that once RIM has caught up to browser performance the mobile world has moved over to robust third-party apps, which the BlackBerry platform doesn’t really offer. I won’t get too heavy into that, but even apps like Twitter blend in with the overall outdated and bland look of the OS. RIM can keep calling them "super apps" but there’s really nothing super about them. Also, the fact that there aren’t Google apps in BlackBerry App World is just downright insane. It’s not hard to download the Java app through the browser, but it is an inconvenience for most in this app store day and age. 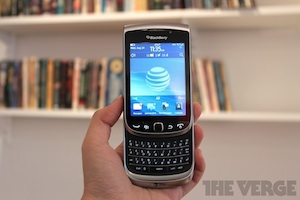 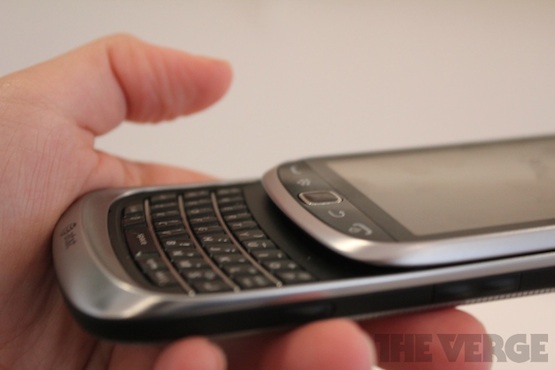 I will tell you what I have missed, though. Battery life. The Torch 9810 wasn’t able to make it through a full day and a half of use like my old Curve 8530, but after a full day of heavy Twitter and email use and voice calls, I still had 20 percent to go.

Like the Bold 9900, call quality was decent. I didn’t experience any dropped calls in the past few days and the speakerphone wasn’t overblown like Jacob described on the 9850. Of course, this is the first "4G" BlackBerry, but I can’t say I’ve been hugely impressed with data speeds. I’ve had full HSPA+ reception for much of the week in NYC, and while most of the time pages loaded quickly — thisismynext.com in 12 seconds, CNN in 25 seconds — some still got hung up.

Our review of RIM BlackBerry Torch 9810 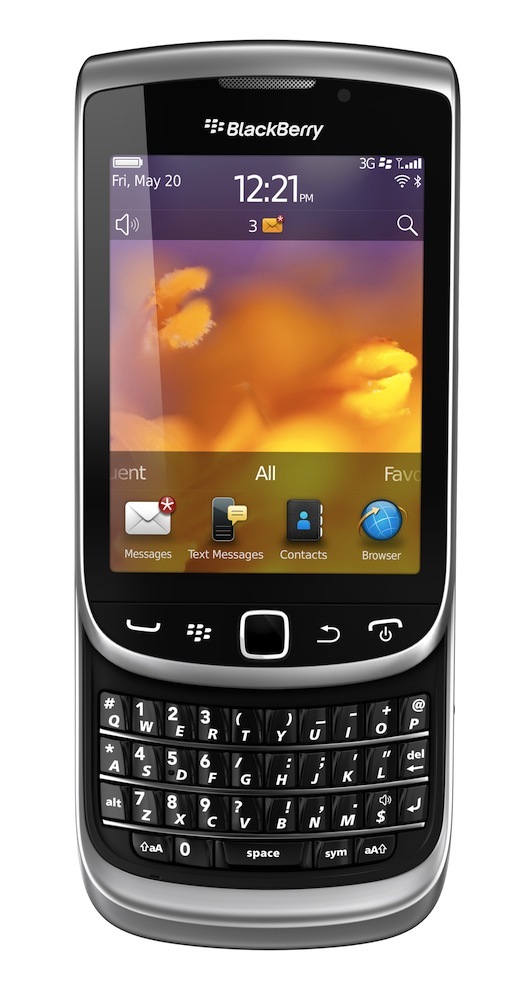 Neither the new Torch nor Bold provide what it takes to reel back in an Android convert. I’ve seen the other side — the beauty of a large app catalog, an OS that is modern to the core

Here’s the truth: had the Torch 9810 been RIM’s original Torch — released a year ago — I might very well still be a BlackBerry user. RIM would have had a phone on the market with a really solid browser, snappy performance, and a decent screen. And that probably would have been enough for me at the time — I suspect that will still be the case for diehard BlackBerry fans. It isn’t as thin as the new Bold and the keyboard isn’t as good, but it is over $150 cheaper on contract at AT&T. Regardless, I suspect either device will keep BlackBerry addicts content.However, for someone like myself, an Android convert, neither the new Torch nor Bold provide what it takes to reel me back in. I’ve seen the other side — the beauty of a large app catalog, an OS that is modern to the core, and was designed for finger input. If RIM wants to win me or the rest of the market back, the next Torch, well, needs not to be a Torch at all.