To celebrate our 10th birthday, we’re taking a look back at our first decade of coverage. And to start, we’re breaking down exactly what those 120,000 stories were about.

This isn’t just the story of what The Verge covered, though. It’s the story of how the technology industry evolved over the last decade: companies tangled over high-stakes lawsuits, powerful new figures reshaped how we communicate, companies rose and fell competing over slivers of market share. Even the way we talk about tech has changed.

Inside the headlines, you can see the shape of these monumental changes — busts and booms, flights of interest, spikes in trends and personalities. And yeah, you can also see if we covered iOS more than Android. There’s an answer, I promise. Stick around to find out.

10 YEARS OF THE VERGE

Visualizing everything we’ve ever written

Every icon on the chart below represents 200 stories on The Verge. Add them up, and you can see what companies and subjects dominated our coverage over our first decade. From Apple and Google on top, to hundreds of stories dedicated to net neutrality and Fortnite below.

Of course, not all of our stories could be so easily distilled down to just a single company or phrase — particularly for complicated topics like climate change and health tech. Those subjects compose the 37,000 stories at the bottom that couldn’t be labeled quite so clearly. 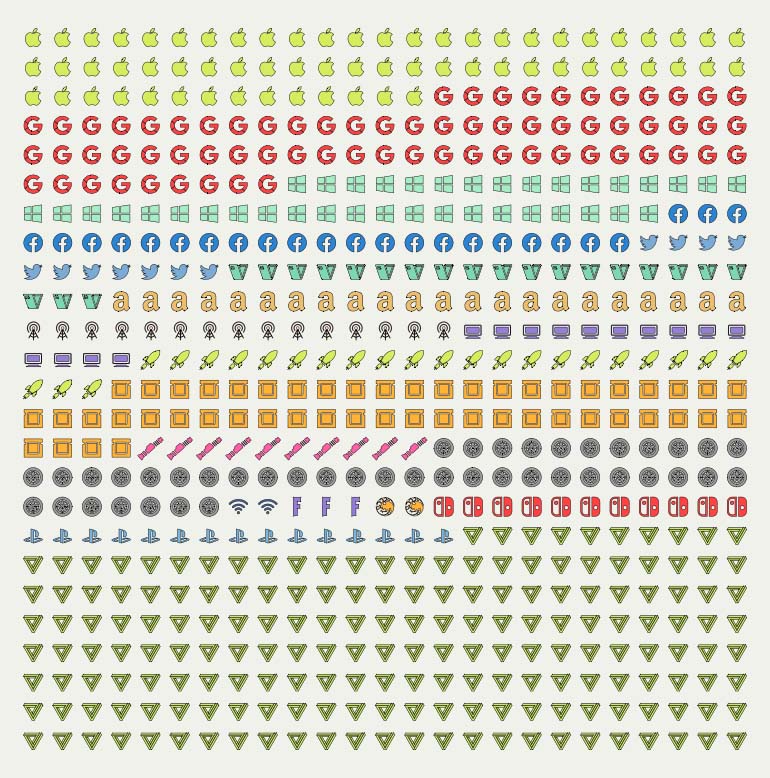 From Chromebooks to Xbox

Apple, Google, and Microsoft were the biggest drivers of Verge headlines over the last decade. Here’s what our stories covered. 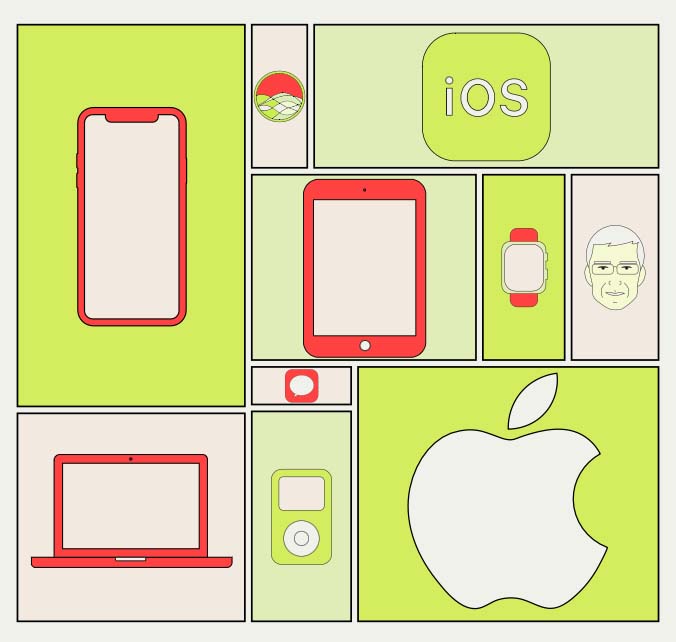 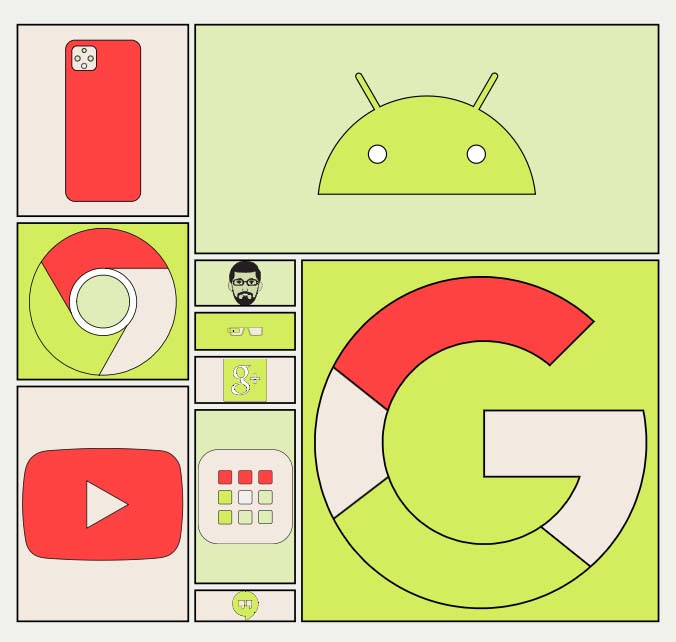 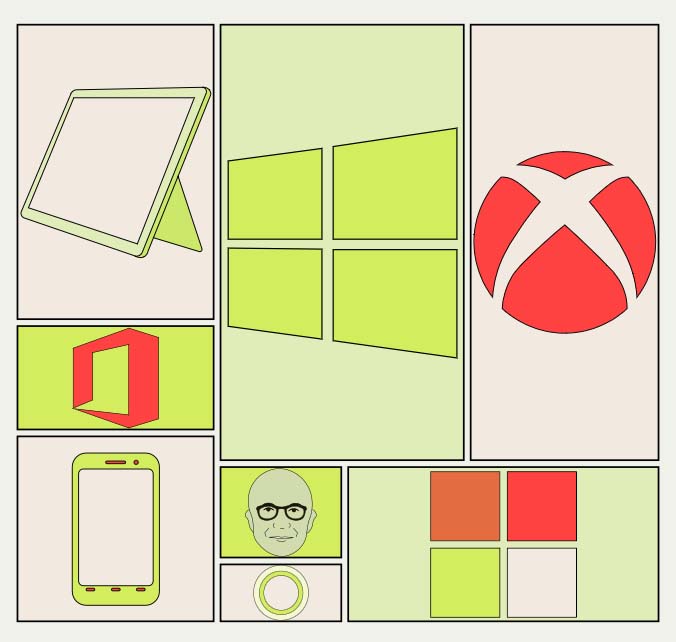 How our tech coverage evolved over 10 years 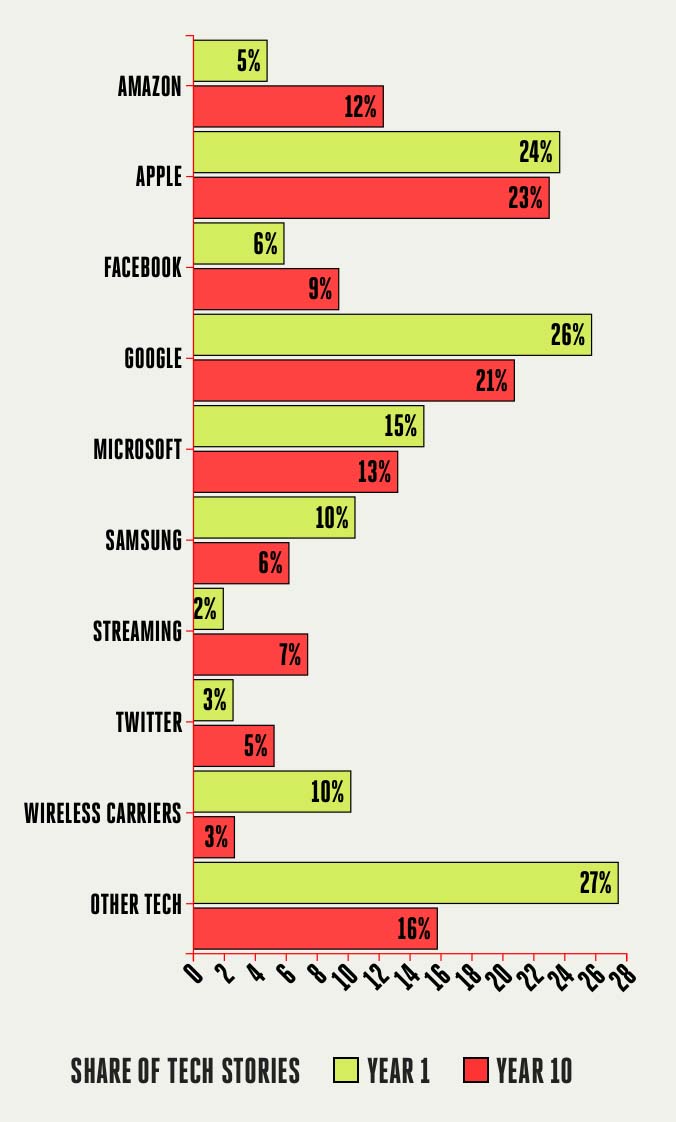 The story of our coverage is very much the story of consolidation. Apple, Google, and Microsoft are nearly as dominant as they’ve always been, collectively having a presence in the majority of our tech stories.

But where a world of other hardware companies — like Nokia, Motorola, and HTC, to name just a few — once made up more than 1 in 4 of our tech stories, they’re now less than 1 in 6, having struggled to keep up with bigger brands. Coverage of wireless carriers like AT&T and Verizon has also fallen substantially, as the companies lost their domineering grip on the smartphone market.

Meanwhile, Amazon, Facebook, and Twitter have roughly doubled in prominence. The biggest shift in the tech space? Streaming, which now gets a bigger chunk of headlines on The Verge than Facebook did in our first year.

A lawsuit with rounded corners

The biggest story of 2012 was a blockbuster trial between Apple and Samsung. That year, we covered the trial relentlessly, writing more headlines referencing both companies than we did the next eight years combined. 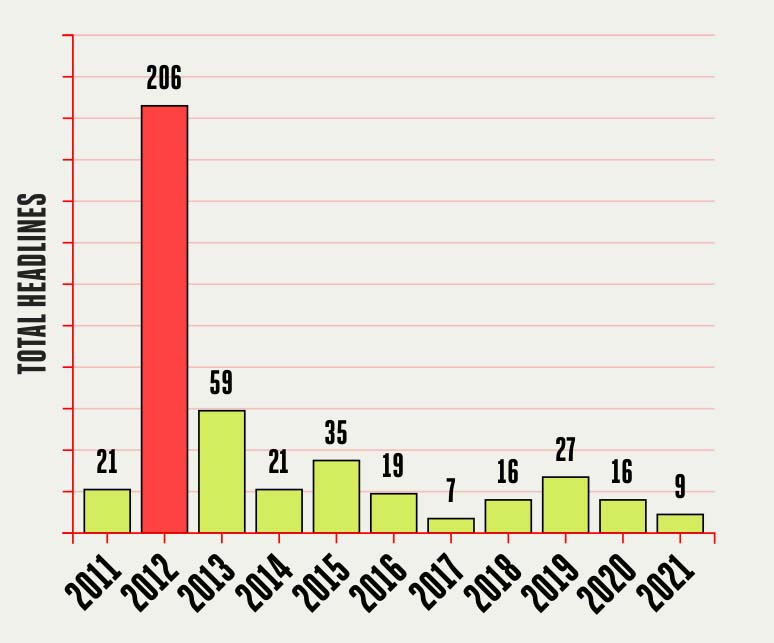 In 2013, Microsoft tried to break into the smartphone hardware market with a $7.2 billion acquisition of Nokia.

It went poorly — but Microsoft wasn’t alone. Other companies that dominated the early days of smartphones have struggled in recent years, replaced by companies like OnePlus and Huawei that either didn’t exist or had a tiny US presence at the start of the decade.

Below, you can see how our coverage reshaped itself around the winners and losers (and, in some cases, paid outsized attention to small but compelling brands). 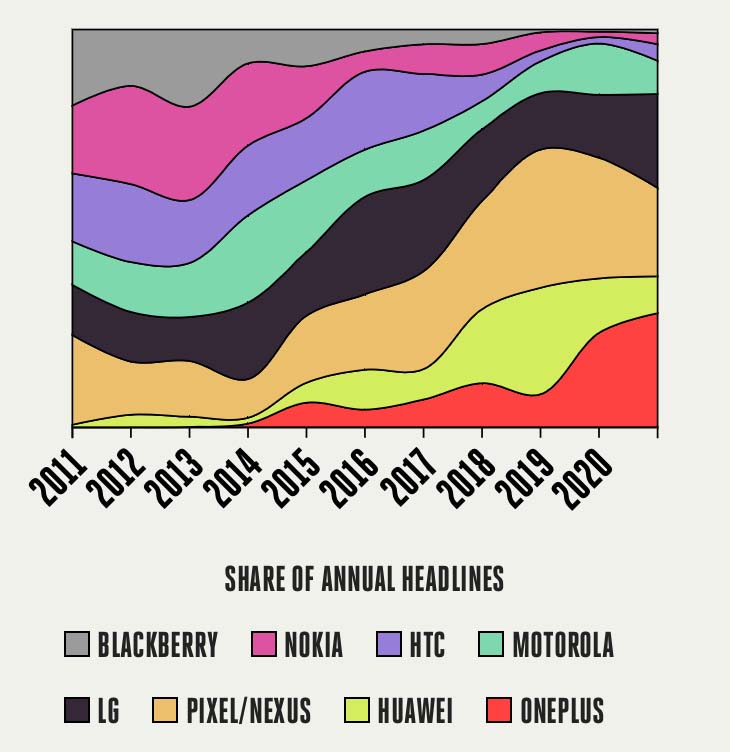 In 2014, Amazon invented a new category of product — you can still sense our initial shock from The Verge’s first headline: “Amazon just surprised everyone with a crazy speaker that talks to you.”

That was also the debut of Alexa. And though Siri had established the smart assistant category, Amazon’s assistant quickly surpassed it and has remained dominant in the space. Sorry, Bixby. 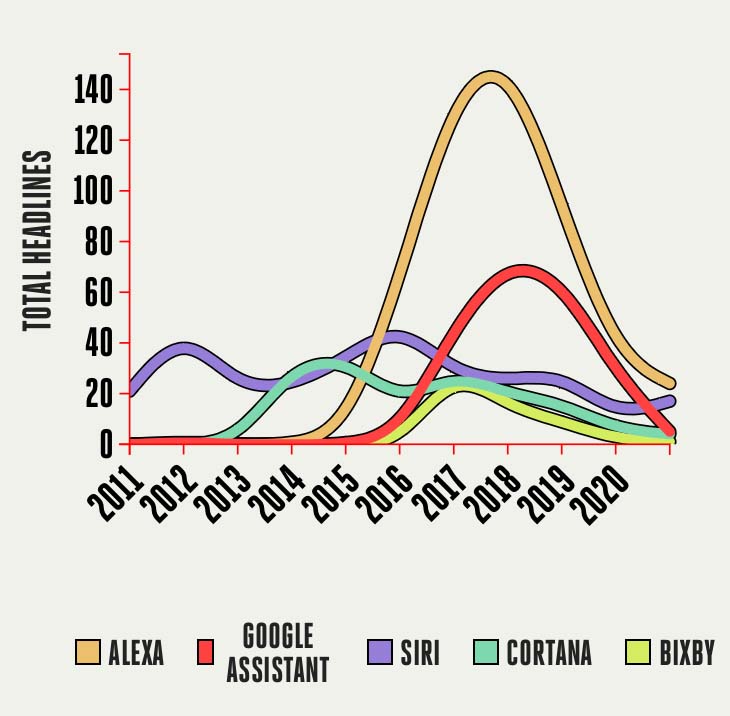 Apple, Google, and Microsoft all named transformative new CEOs during the last decade — and for the most part, they’ve all stayed fairly quiet. Tim Cook made a lot more headlines as he worked to show that he could continue Apple’s success streak, and he’s made a lot fewer since proving he could more than steady the ship. 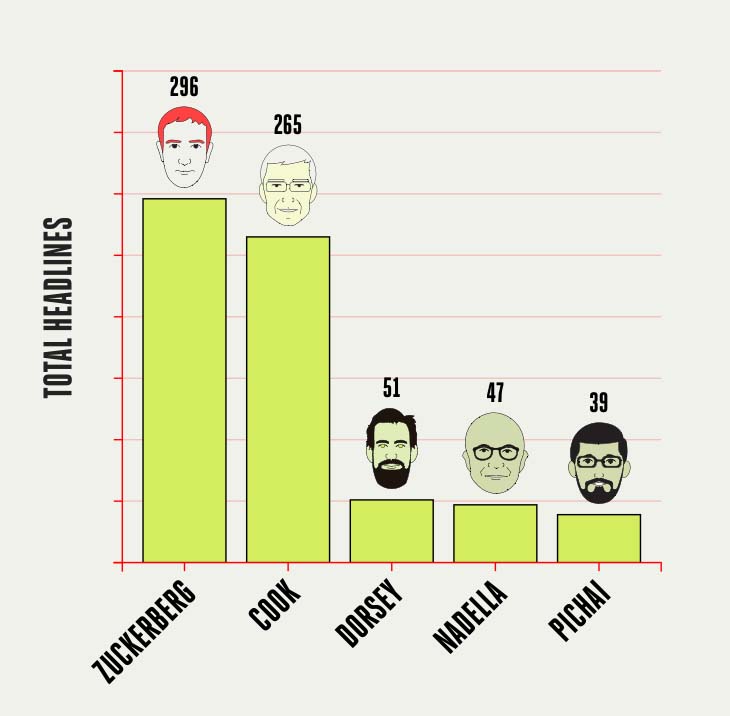 Seriously: We wrote about Kanye more than 3x as much. 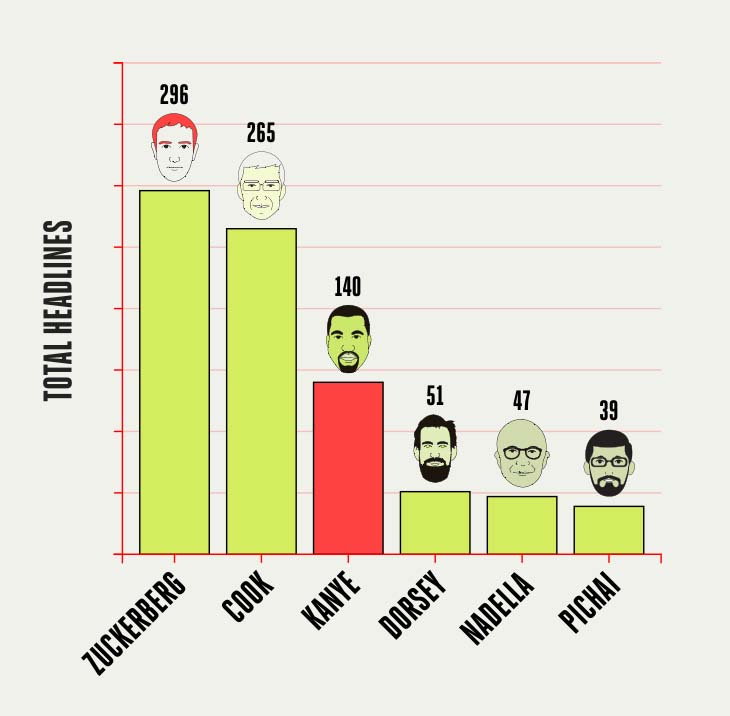 Of course, one CEO is far noisier than all the rest: 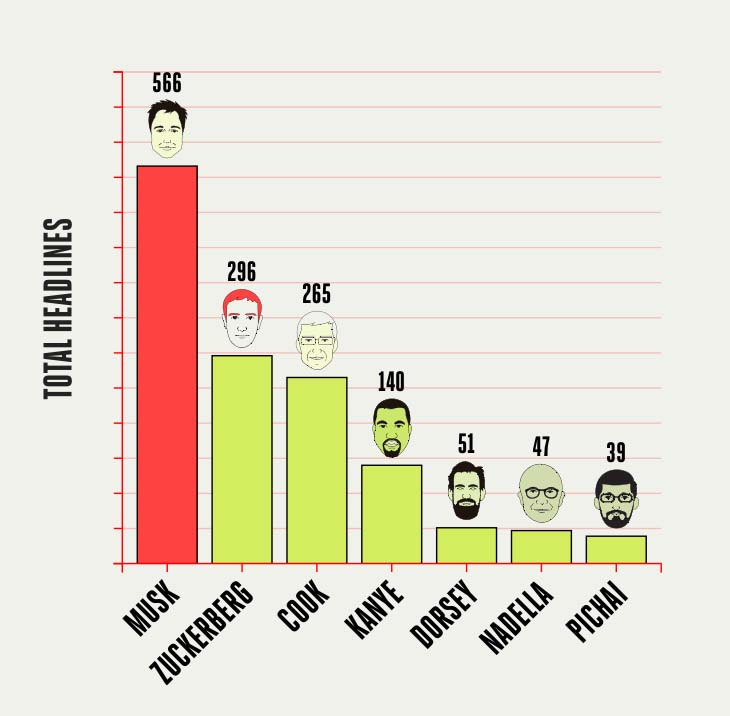 OUR MOST BEAUTIFUL GRAPH YET

The Verge’s team has always been effusive about the products we love. But it’s possible that we went overboard at times — see: describing 74 things as “beautiful” in 2016.

Either things got uglier after that, or we’ve learned to chill out a bit when describing new tech. 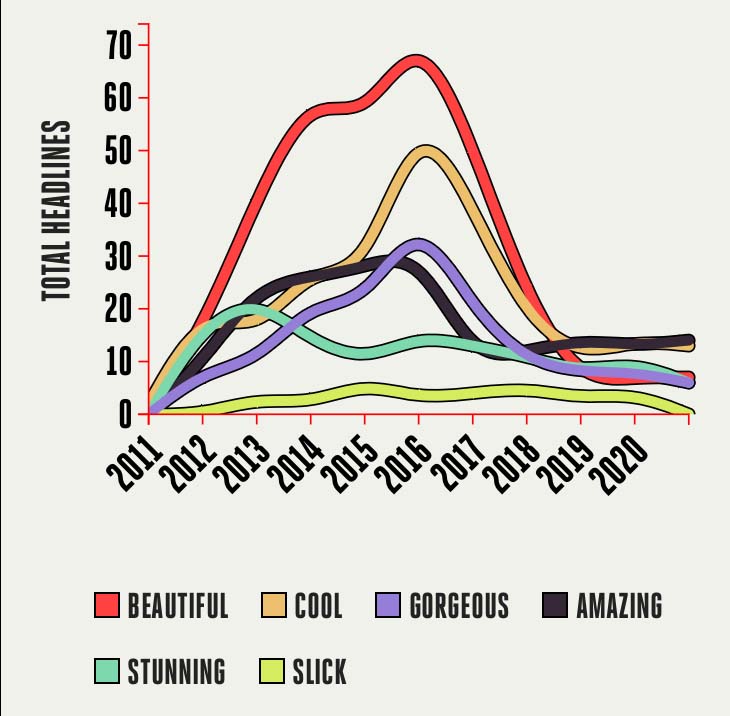 Which topic got more headlines? The results weren’t surprising to our staff of Windows-using robots in New York.

RT IF YOU AGREE

Social media has involved a lot of the same names for the past decade, but there have been some significant shifts in that time. Facebook was always important, but after 2016, it became important in a totally different way — a flashpoint for stories around how social media is reshaping society, often for the worse.

And in recent years, Twitch and TikTok have become impossible to ignore. In 2020, TikTok’s popularity exploded, crossing the number of headlines about Instagram and becoming just as prominent as YouTube in our coverage. 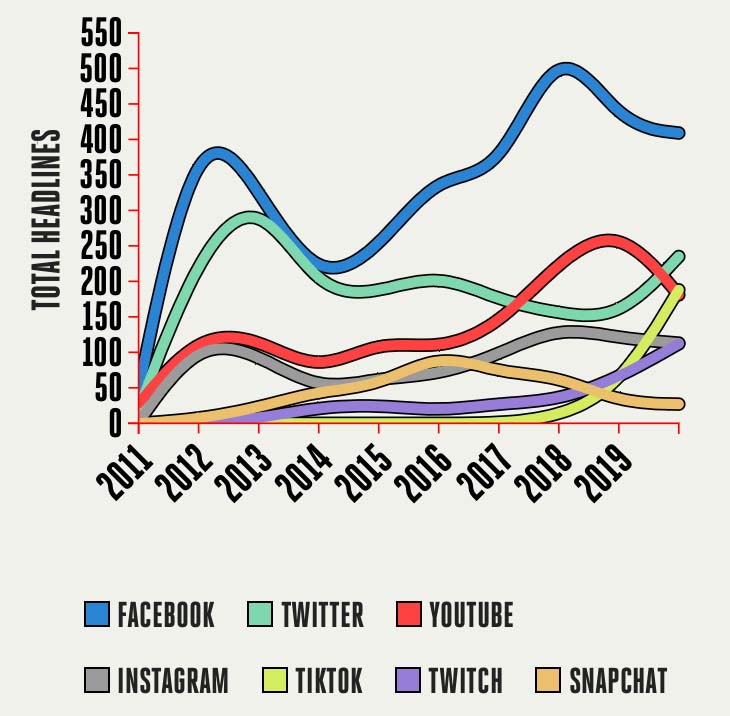 IN CASE YOU WERE WONDERING...

In memory of rose gold, vine, and headphone jacks

How big was rose gold? Did we really write about headphone jacks that much? Our headlines have answers. Here’s how many shout-outs they got. 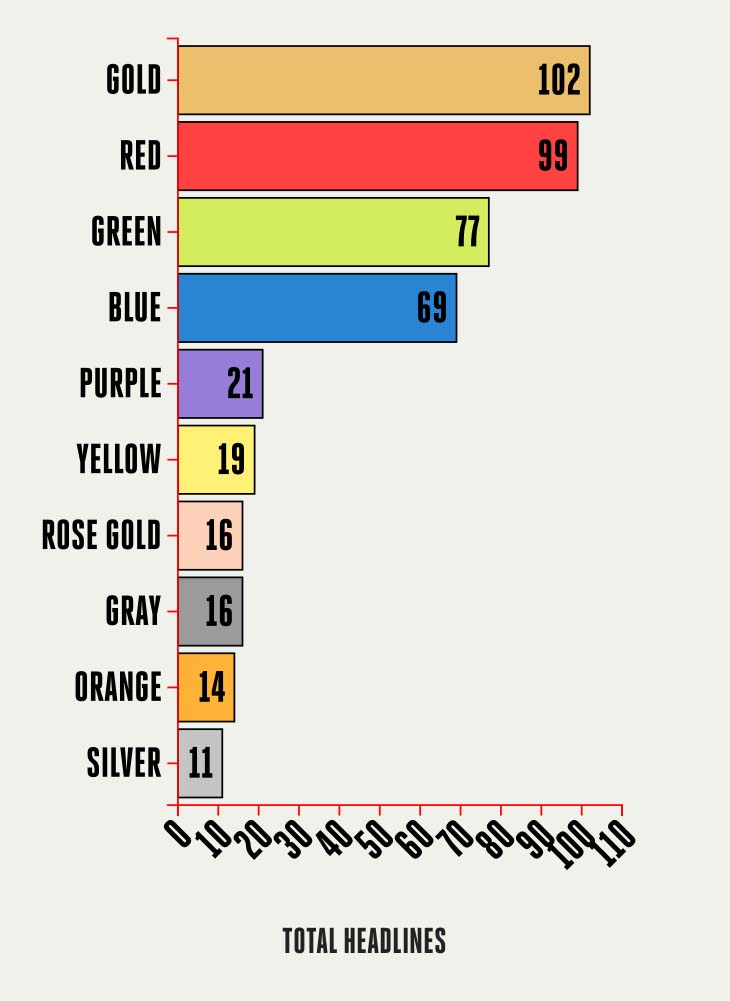 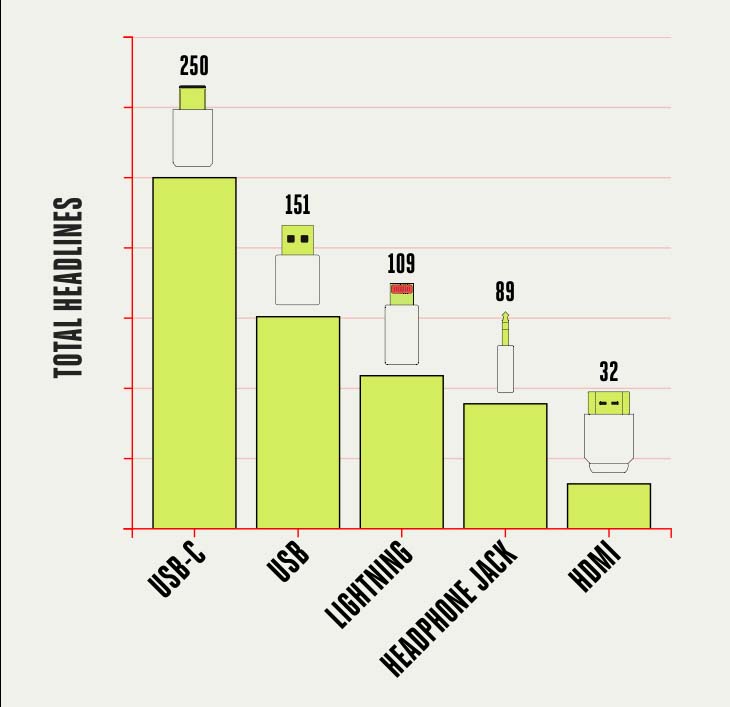 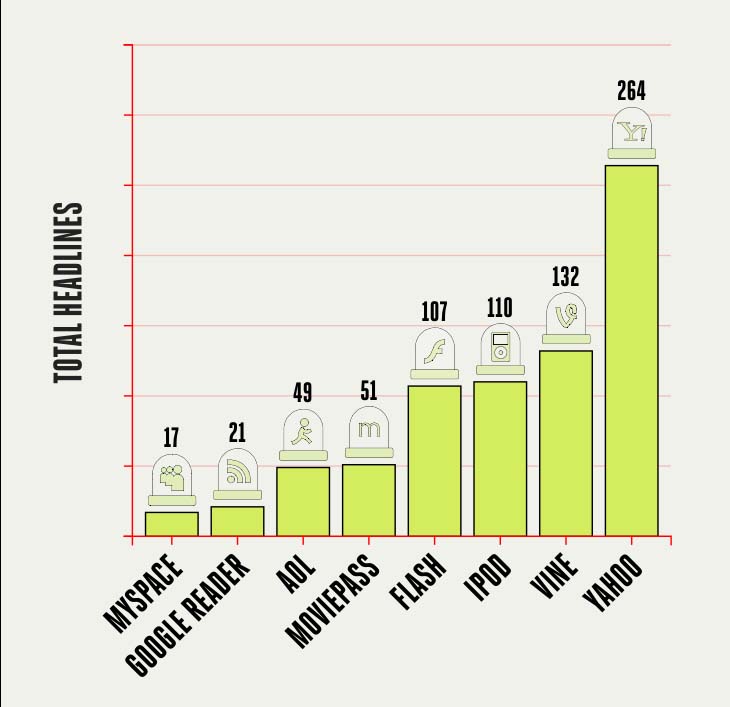 THE ONE YOU’VE BEEN WAITING FOR

I promised an answer to whether we covered Android more or less than iOS. After 10 years and 120,000-plus stories, here’s the answer. Answers, actually. 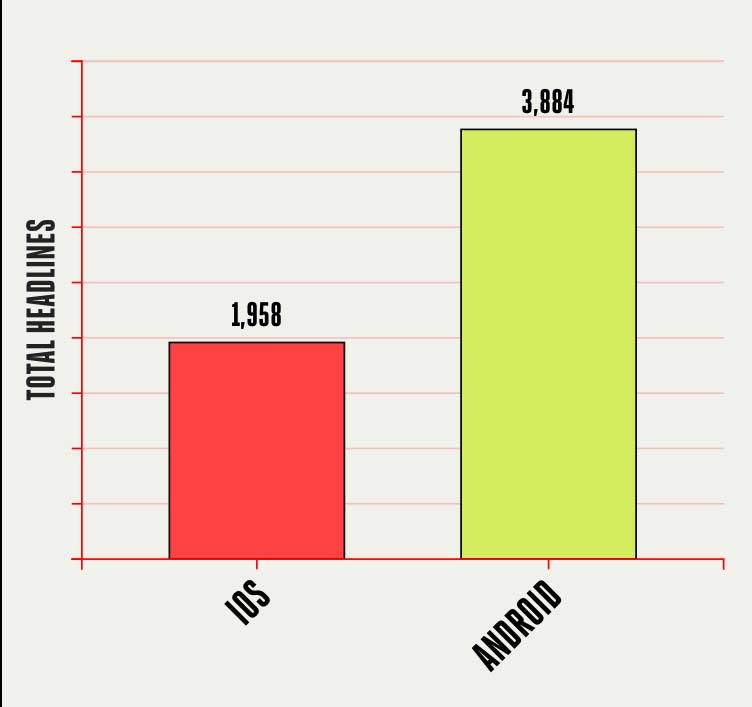 Android takes it away. Even if you add in all of the operating systems that iOS has now split into (iPadOS, tvOS), it doesn’t get close to catching up.

But that only tells you how much we mentioned the operating systems themselves, not the devices that run them.

So what if we added iPhones, iPads, Apple TVs, and Apple Watches to the Apple list so it encompasses the biggest gadgets based around iOS, and then added more than a dozen top Android brands (Nexus, Pixel, Galaxy, etc.) to the Android list to get a more complete picture? 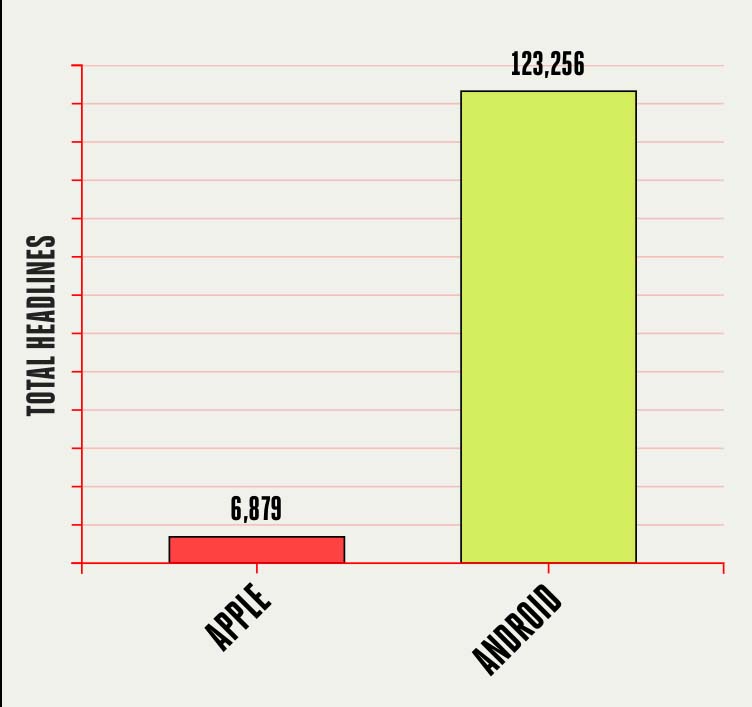 Android still has the edge, but the numbers get a whole lot closer when you look at the complete iOS ecosystem. There may be far more Android devices out there, but each iOS device has a far bigger and longer-lasting impact, driving headlines beyond its initial launch and review.

A final stat for you

We’ll leave you with one last number: The Verge has referred to “you,” the reader, more than 9,000 times in our headlines. In case you’re wondering, that’s more than twice the number of headlines Samsung and Amazon got, more than 20x the number for Snapchat and Game of Thrones.

It’s a grammatical quirk, sure. But it’s not a coincidence. The Verge has always written for you, the consumer, the person trying to figure out what to buy, or how to get the most out of your tech, or the best way to stay connected to friends and family. Our reviews point to flaws that need to be fixed, our news coverage highlights where companies try to steer you wrong. And we try our best to direct you to the most exciting new things along the way — from apps and gadgets to scientific discoveries and TV shows.

It’s the kind of coverage we at The Verge want to read. We’re glad you do, too.