MakerBot teases 'next generation' of 3D printing for CES 2012

MakerBot Industries chose a unique way to tease its upcoming CES announcement: an original text adventure. Playing through the (pretty challenging) game revealed that the company will reveal "the next generation" of its 3D printers on January 9.

Share All sharing options for: MakerBot teases 'next generation' of 3D printing for CES 2012

MakerBot Industries chose a unique way to tease its upcoming CES announcement: an original text adventure. The Brooklyn company, known for its 3D printer kits, commissioned the game from award-winning writer Andrew Plotkin. Key Features takes place in the distant future, with the player, having wandered away from a MakerBot tour group, locked in a room with only a replicator and a few cryptic clues. We took the time to ponder out some pretty challenging puzzles, involving the Greek alphabet, number sequences, and picture-matching. Each completed puzzle earns a data chip containing a printable MakerBot design; the replicated objects help the player escape.

The final prize (which, we admit, took us about two hours to reach) is the key to a treasure chest, which opens dramatically to reveal a "fully-restored model of the original 2012 Replicator." We've got only a name so far, but the accompanying link touts "MakerBot: The Next Generation," which sounds like a major revision. Luckily, we won't have to wait long to find out, with an announcement coming January 9th. For spoiler lovers, we've included the ending of Key Features below. 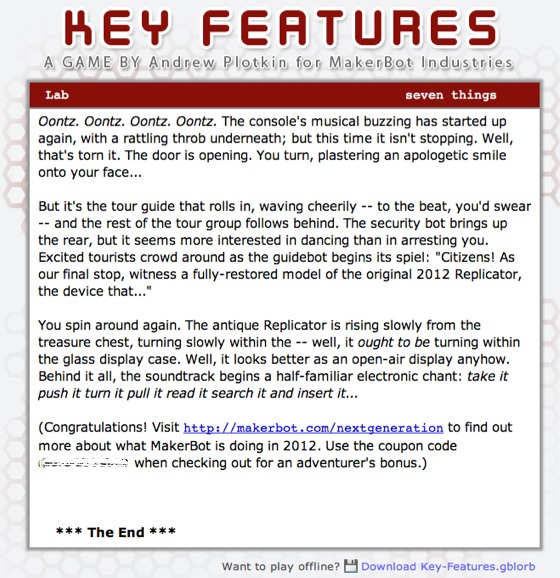