Before Dr. Dre and Beats came along, only committed audiophiles cared to spend more than a couple hundred dollars on a pair of headphones. But times have changed, and with smartphones now obviating many of our other gadgets, we all have a bit more cash to lavish on our personal audio equipment. This is where Oppo’s $399 PM3 and Audeze’s $449 Sine come in, two pairs of premium portable cans that are a little bit different from the norm.

Both the PM3 and Sine use planar magnetic tech that relies on an ultrathin membrane instead of the conventional voice coils and cones to generate sound. Because their diaphragm moves uniformly across its full surface area, it can deliver more consistent and precise sound and thus produces fewer distortions. It’s the sort of stuff used in extremely large and extremely expensive headphones, so it’s a rarity to see it at such attainable prices and in such compact forms. Audeze’s top model, the LCD-4, is a behemoth that costs five bucks shy of $4,000, while Oppo’s PM1 flagship is a more reasonable $1,099. Both companies believe that their lite planar magnetic headphones represent the ultimate in portable listening.

Though it costs less and isn't much larger, Oppo's PM3 is the better designed and more accommodating headphone: it fits over the ear while the Sine sits on top of the ear. In terms of accessories, Audeze only provides a basic soft pouch for the Sine, whereas Oppo ships the PM3 in a much more robust, semi-rigid denim case. Oppo also adds a longer 3m cable to go with the standard 1.5m portable cable with in-line mic. The PM3 uses a standard 3.5mm connector, so replacement cables shouldn’t be a headache either.

Audeze prides itself on making everything custom, which in this case means a quirky cable attachment mechanism (it connects to both sides versus Oppo’s single-sided hook-up) and compatibility only with Audeze-designed cables. There’s a separate $50 Lightning cable on offer from Audeze as well, which includes a built-in amplifier and 24-bit DAC for use with iOS devices.

Audeze’s sole design advantage over Oppo is in having replaceable ear pads. That’s significant over the full course of a headphone’s life, but Oppo’s default synthetic leather set offers great quality and comfort, so I’m not too bothered by it. Both headphones make liberal use of metal in their construction, which is reassuringly premium and precise. Audeze uses real leather for the Sine’s ear cups and headband, though I actually prefer the feel of Oppo’s synthetic stuff. 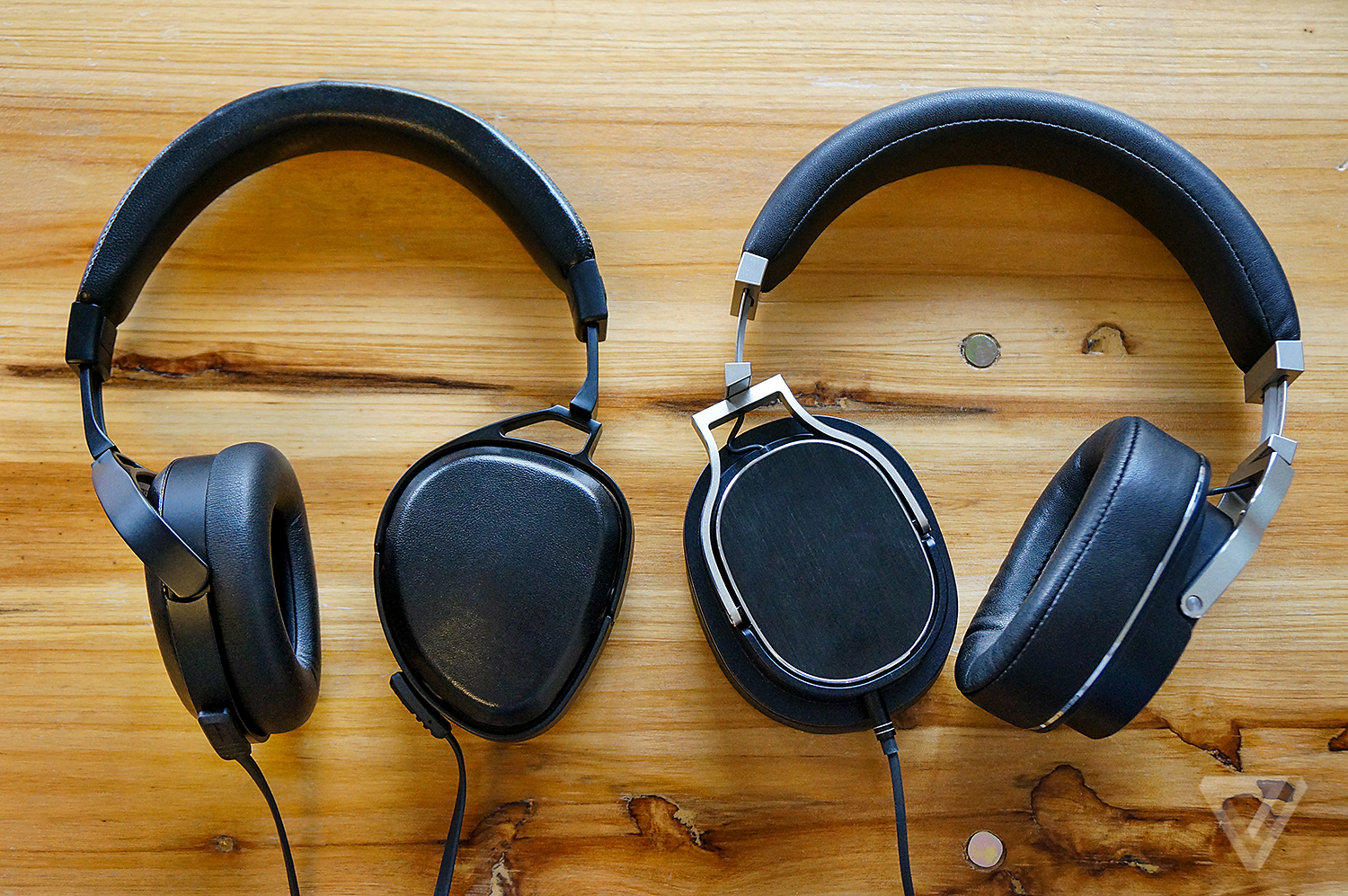 Both headphones swivel 180 degrees, making for a flat profile when transporting or wearing them around your neck. Both also have adjustable arms, with the PM3 offering discrete levels of extension and the Sine sliding smoothly in and out. I favor Oppo’s implementation because I always know how many clicks I need to open it up for my size. Audeze’s approach requires some trial and error every time.

The PM3 is better designed, better built, and much more comfortable

More important than the build and accessories, though, is the fit. This is where Oppo wins by a huge margin. The over-the-ear PM3 is a splendidly comfortable headphone that can be worn for hours, maybe even days, without fatigue. It’s heavier than the Sine, but you can’t tell once it’s on your head — weight distribution is faultless. Sitting on the ear rather than around it, the Sine pair have a peculiar form of discomfort about them. Once I fit them correctly, they don’t feel unpleasant or tiring — and like the PM3 they have well-judged clamping force that keeps them securely on my head — but when I take them off, my ears ache. Basically, the Sine put pressure on the ear lobe, which makes itself felt after they’re taken off. That’s not a universal thing with on-ear headphones, as Beyerdynamic’s T51i also sit on the ear, but do so much more gently. 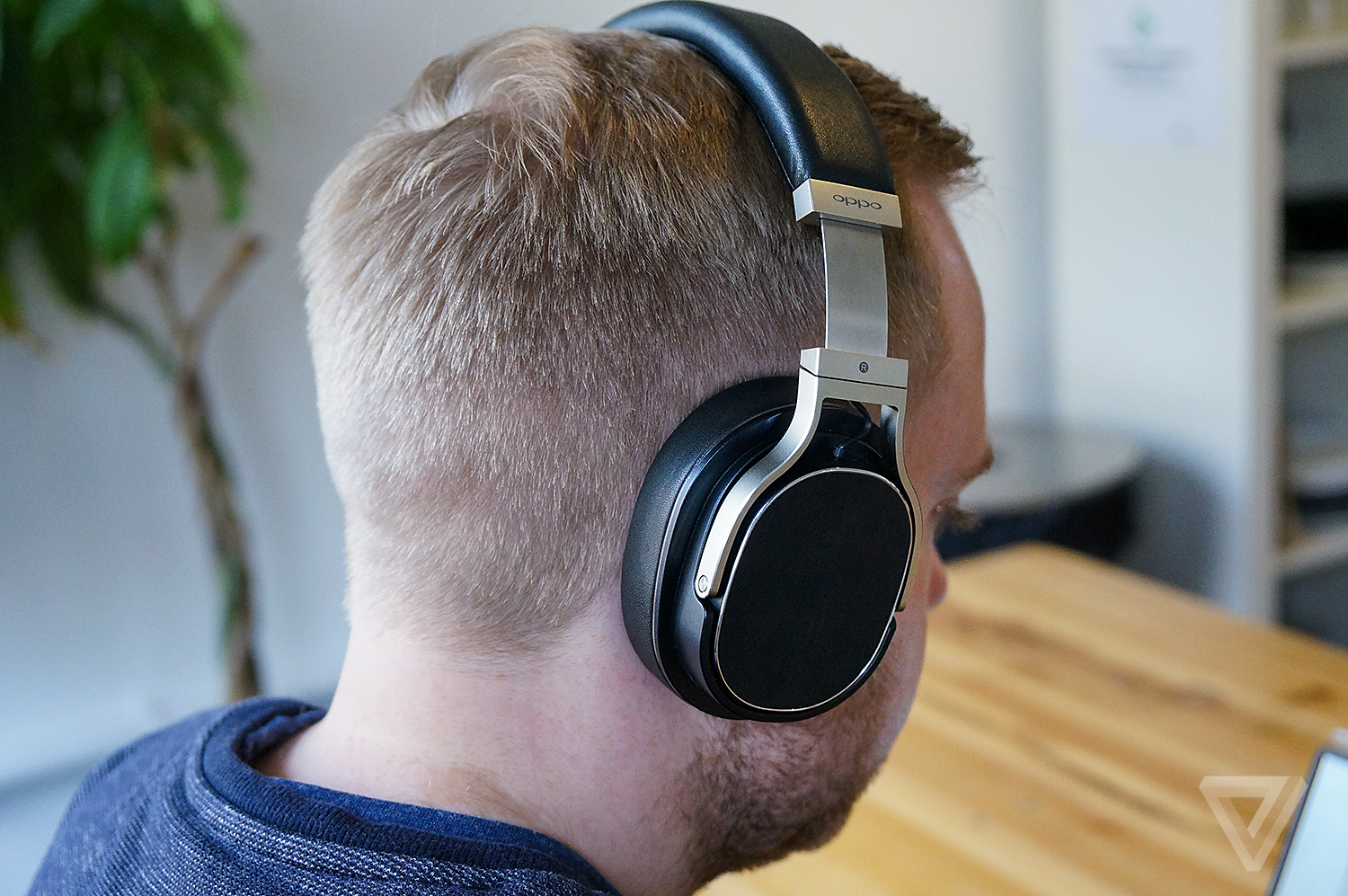 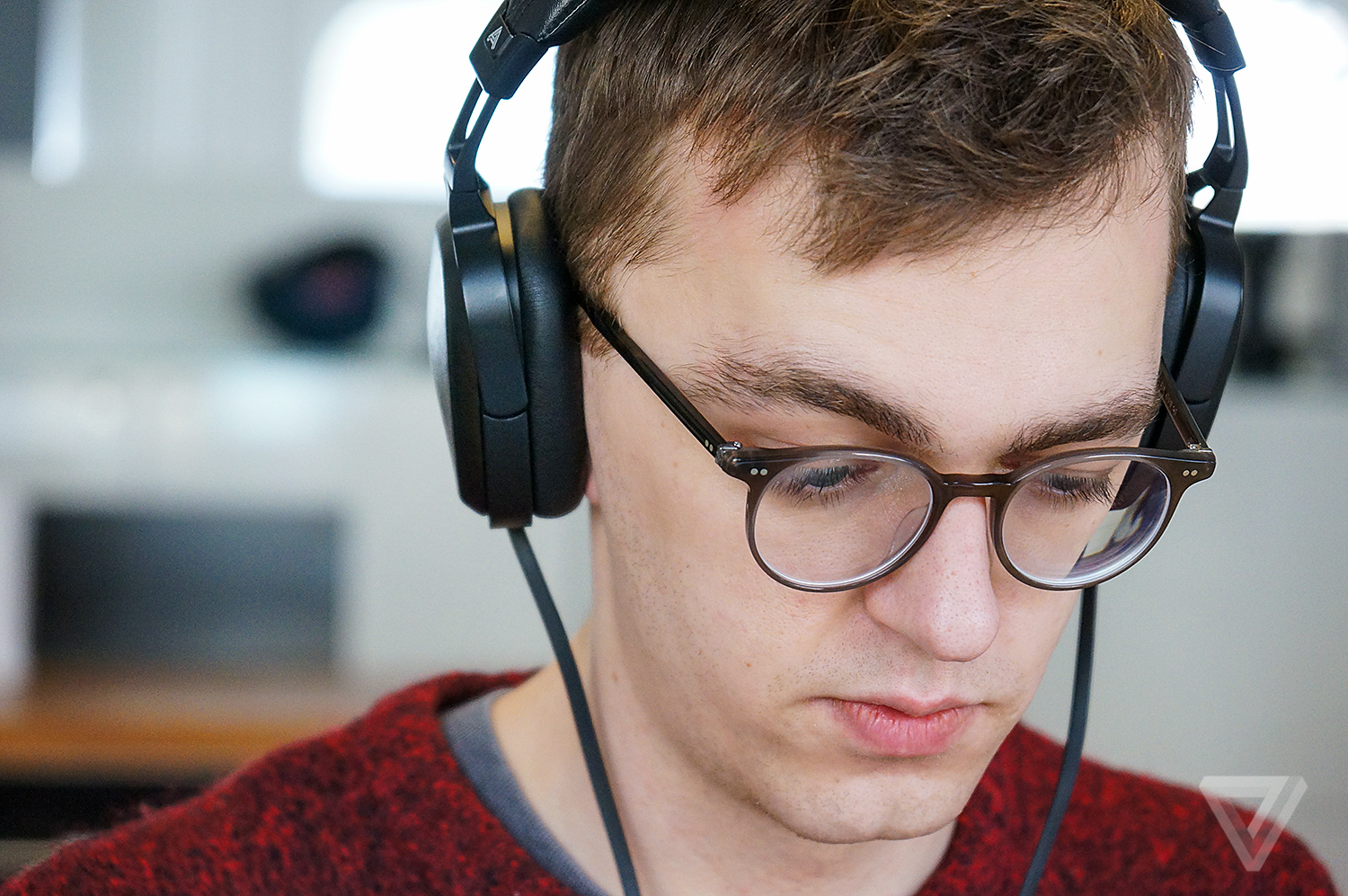 Audeze celebrates the Sine for being the first on-ear planar magnetic headphone, but for my money, I don’t see any portability advantage with the Sine over the already established Oppo PM3. That’s to Oppo’s credit, for having crafted a pair of headphones that’s close to perfect in terms of design, fit, and construction.

Because both the PM3 and Sine have a closed back, designed to block external noise from getting in and your music from leaking out, both have a rather constrained soundstage. On the Sine, everything sounds like it’s happening in the space between your ears. On the PM3, you get a greater sense of space, but both sets are very much within their category’s normal range — no competition to open and semi-open designs like the AudioQuest NightHawk, Philips Fidelio X2, or Beyerdynamic T5p.2. Of the two planar models, Oppo’s PM3 does the much better job of sound isolation, and it might even better than most headphones in its class. You can actually wear a PM3 pair just to drown out external noise in the office, without playing back any music. The on-ear Sine doesn’t offer any such bonuses, but it does a fine job of containing sound leakage (which is another strength for the PM3).

Over the past few months, I have listened to both headphones through a pair of high-quality portable DACs — the AudioQuest DragonFly Red and Oppo’s own HA-2 — and also hooked them up to a selection of smartphones and laptops to fully verify their claims for portability. The source material has primarily been 320kbps MP3 files with a few lossless recordings thrown in. 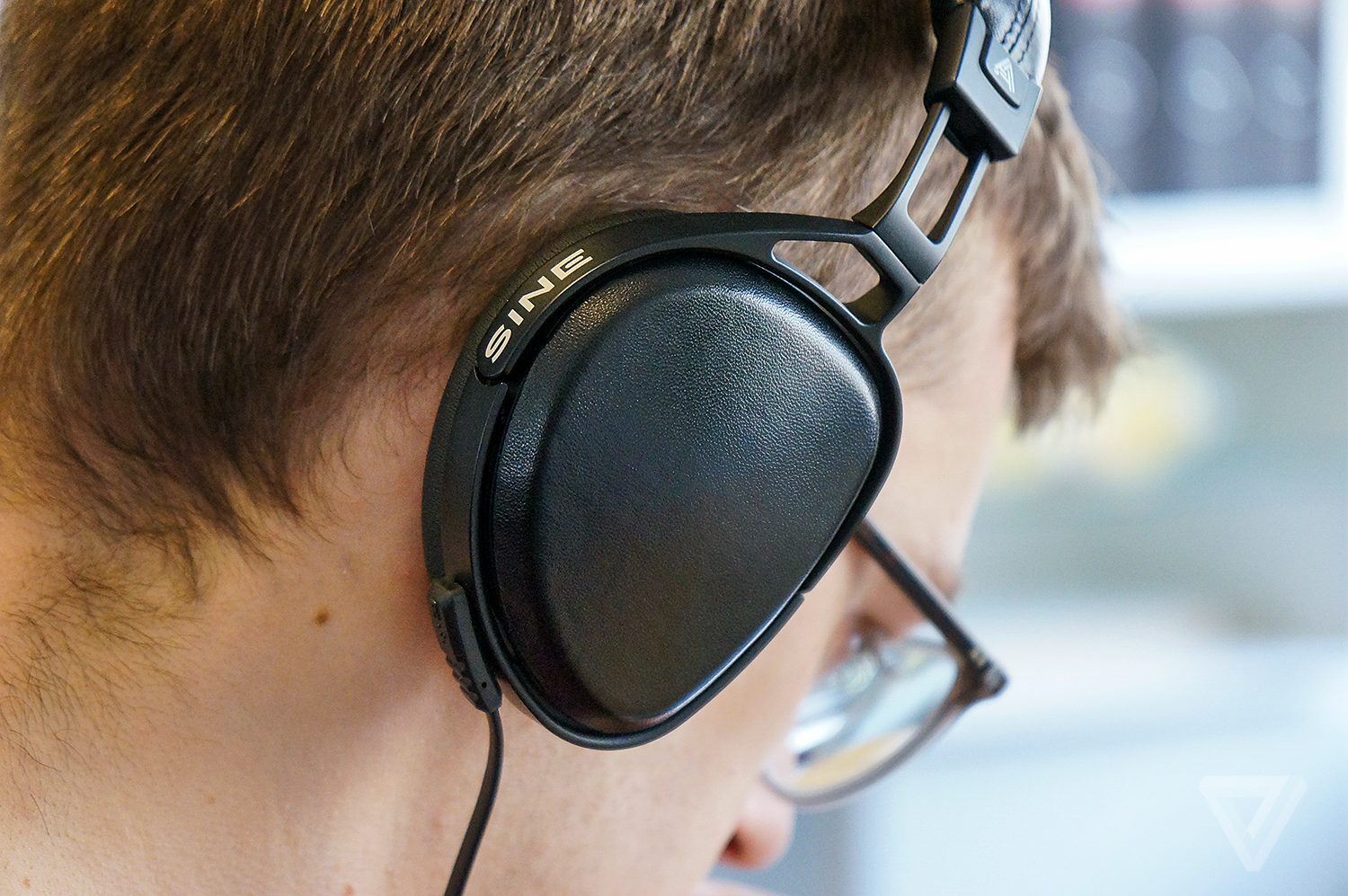 The Oppo PM3 can be comfortably driven with most smartphones, though I’d suggest HTC’s 10 or One A9 along with the LG V10 as the best choices for getting the most out of it. Not for any Oppo-specific reason, but simply because those offer the best sound right now, with the iPhone 6 / 6S and SE models following closely behind. Audeze’s custom Cipher cable option adds its own DAC and amplifier and connects to Apple’s Lightning port. If you own an iPhone, I’d say it’s well worth getting that cable with the Sine, because it makes a big difference — both in volume and quality — and Audeze also provides an app to let you retune the EQ to your liking.

It doesn’t take long to identify a stark contrast in the sonic signature of these two sets of headphones. The Sine has the popular U-shaped response curve that emphasizes bass and treble at the expense of some midrange prominence, while the PM3 is famous for having perhaps the flattest response around. In my listening tests, the Sine has proven the more fun and enjoyable headphone almost all the time.

Oppo is polite, Audeze is audacious

On bass-rich electronic music albums like The Glitch Mob’s Love Death Immortality, the PM3 performs faithfully but forgettably. The Sine, on the other hand, really lashes out with the bass hits in a fast and violent manner that, to my thinking, is closer to the artists’ intention. Both headphones are lightning-quick in their response and suffer no distortion even at dangerously loud volumes — this degree of precision is the big advantage of planar magnetic cans — but the Sine has the extra low-end punch that the PM3 seems too idealistic to want to provide. 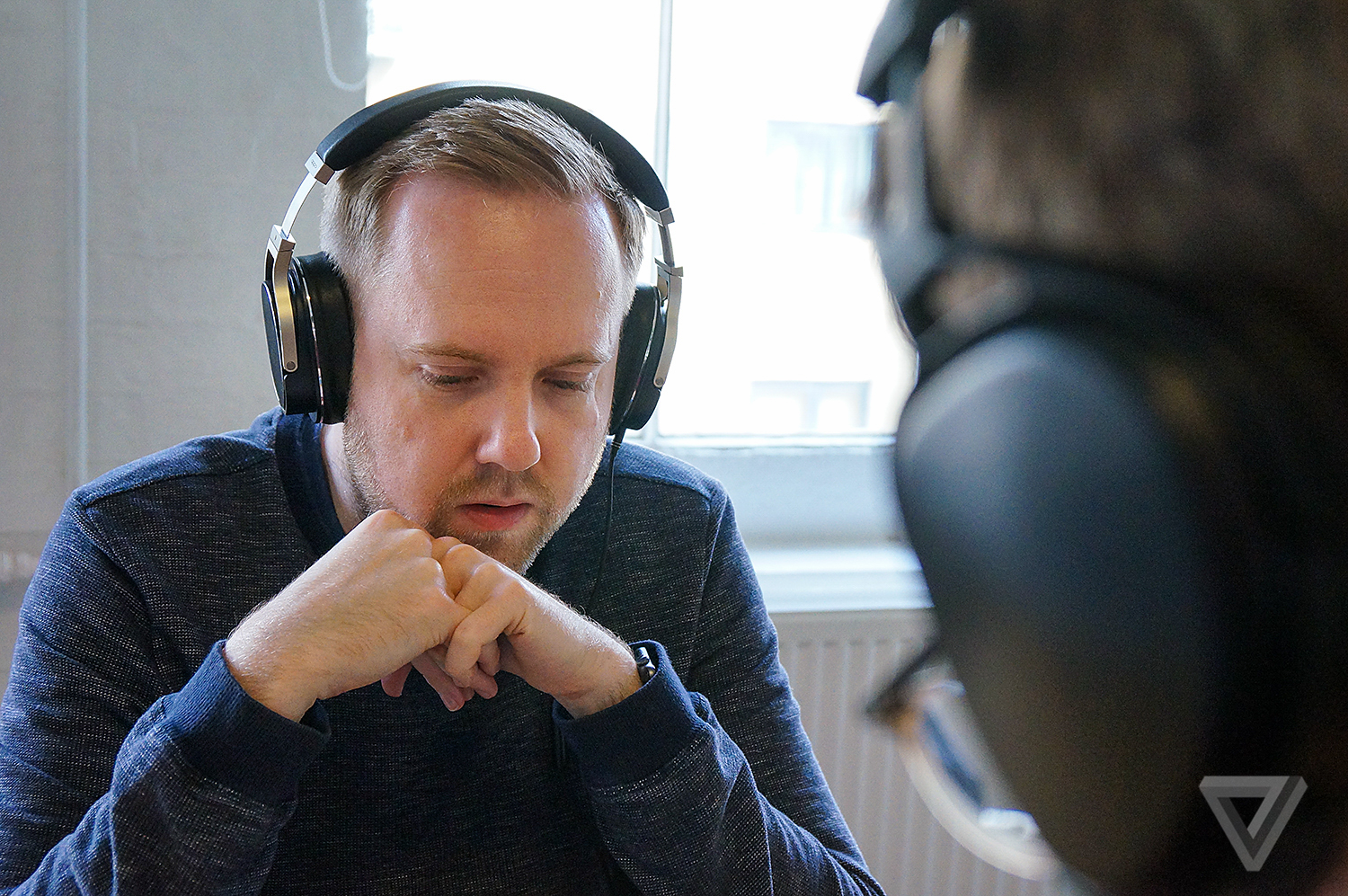 As to highs, Oppo refuses to ever get crazy. DJ Krush’s "Still Island" from the album Jaku has some high-pitched flute segments that sound unnerving and raw on the Audeze Sine, like human screams of distress, but the PM3 just doesn’t convey the same natural timbre. It’s restrained, never harsh, and really feels like a headphone that was tuned to accomplish engineering rather than emotional goals. Like its bass, the PM3’s treble is precise, but seems to lack life and vibrancy. On tracks like "Bombtrack" and "Know Your Enemy," where the Sine recreates Rage Against the Machine’s always-on urgency and aggression, the PM3 gives an unexciting performance that makes both the guitars and drums sound more polite than they need to be.

Oppo’s PM3 does completely outshine the Audeze Sine in one area and that’s vocals. Fleetwood Mac’s Rumours sounds vastly superior on the PM3, thanks to its flatter response. The Sine still has its low and high end excitement, but Oppo owns the midrange, promoting the singer’s voice ahead of the backing track, quite as it should be.

Classical music is a split between the two, depending on how you look at it. Most instruments sound better and more realistic on the PM3, however the Sine still tends to make them more exciting and engaging. A good example is Claude Debussy’s "Clair de lune," where the PM3’s piano is technically proficient throughout, but once again unwilling to hit the highest notes with suitable force. The Sine’s treble response is simply better, delivering just the right amount of sharpness to give the music life and luster without being too bright.

It’s odd for me, as a basshead, to be advocating greater treble response, but I really feel like that’s the major downside of the Oppo PM3. This set of headphones never jolts, startles, or shocks. Audeze’s Sine, on the other hand, isn’t afraid of harshing my mellow on occasion, and I appreciate that. Audeze provides the more pleasing and more present contrast of highs and lows. Oppo provides the sort of cans you can wear for a whole day — without noticing you’ve worn them so long, but often also without noticing your music. I don’t know about you, but if I’m spending hundreds of dollars on headphones, I want them to thrill rather than coddle me.

My overall conclusion with these portable planar magnetic headphones is mixed. They are the result of great feats of design, engineering, and technological miniaturization, however I haven’t fallen in love with either one. The Oppos are very nearly my ideal headphones in the way they are constructed, but their sound is upsettingly tame and spiritless. The Audezes offer dynamism and excitement, but lack the fit and comfort to make them a go-to pair. I feel like these flaws are too significant to give either set of planars a clear recommendation. The technology is awesome, but its execution in a portable form factor still needs refinement.