Tim: I'll use Bing for a year if you put iMessage on Android

Tim: I'll use Bing for a year if you put iMessage on Android

At the end of this year's WWDC keynote, Tim Cook had this nice thing to say:

"At Apple we believe that technology should lift humanity, and enrich our lives."

I agree wholeheartedly. And so I have a simple question for Tim in response: what could a tech company do that's more life-enriching and humanity-lifting than allow people to talk to each other?

I can't and won't make the business case for Apple to bring iMessage to Android. Maybe my former colleague David Pierce can manage that in his excellent Wired piece on this topic. I understand the value of ecosystem lock-in; Apple obviously does, too. But from the perspective of humans, Apple's refusal to port iMessage is a sin of omission.

Here's one simple example of a cross platform world, in the vein of the warm fuzzies Apple tries to induce with its keynotes:

Or how about this:

Dad has an iPhone, but buys a cheap Android phone for his son. They can text back and forth, but only in green. Dad can't see read receipts, or get any of the other iMessage perks in their conversations. So they use WhatsApp instead. Apple is now excluded from facilitating a valuable human relationship, because they want to sell more metal-and-glass bricks.

Apple can't get everyone to buy an iPhone, but everyone could use iMessage. Doesn't Apple want to be there for those times, too? Even the new superfluous features in iMessage, like resizing messages, invisible ink, heartbeats, and strobe effects, are presumably things Apple built to delight people. Look at this conversation, in a press image from Apple’s iOS 10 announcement. Doesn’t Apple want this to happen for more people? 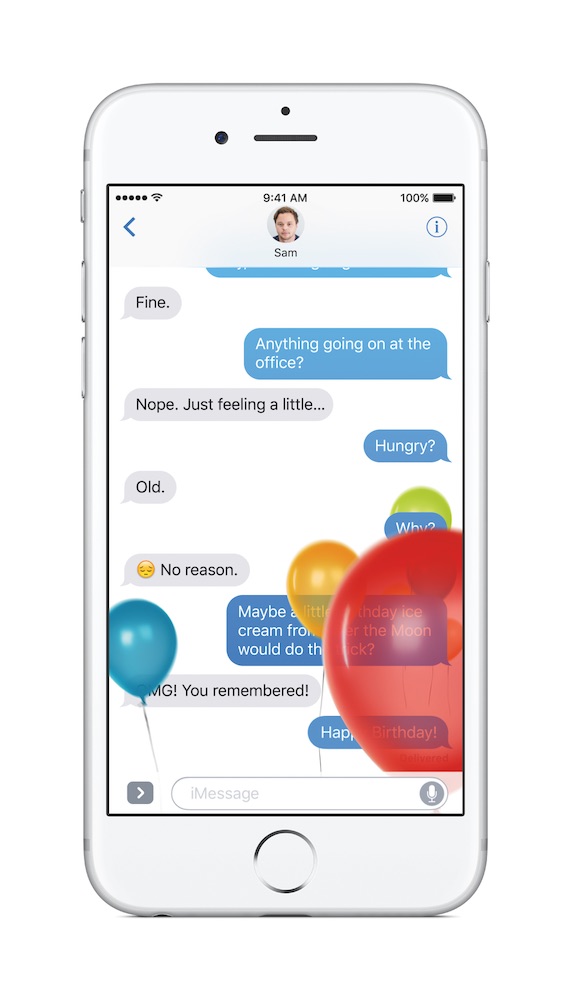 Does Apple want to only delight its hardware customers, or to delight everyone? There's only one way to achieve the latter: make services that are available to all people, not just people who buy Apple hardware.

If iMessage is actually not good for people, and we should be using Facebook Messenger instead, let us know and we'll switch. We all want the best for humanity, right?

I know, I know, I'm being obtuse and naive. Sorry, but this is just how I feel sometimes. Years ago I said something in anger on a podcast, and I think it's actually kind of true:

"Any company who makes Bing the default search engine on its products doesn't care about its customers."

Let me be clear here. It didn't mean this company didn't want to succeed, or that it didn't want people's money. But a Bing default signaled that a company had prioritized a cool cash deal with Microsoft over the convenience and interests of its customers. Because Bing simply was simply far inferior to Google back in 2010 when the trend was starting. Everybody knew it, and it would take a large pile of M$FT money to forget.

But here's where I signal my deep dedication to that Tim Cook quote at the top of this post:

I'll use Bing for a year if Apple will put iMessage on Android.

See, I'm what you'd call a "good at doing something dumb for a year" kind of person. Using Bing exclusively would be painful, inconvenient, and unfun. But it's worth it, because I love humans, and, frankly, I love iMessage. I want more people to use iMessage, and I want the people already using iMessage to have a better experience. iMessage on Android could heal friendships and bring families together. Bing usage is what I could contribute to human flourishing, gritting its teeth and firing up Android Studio is Apple’s part.

Or maybe we'll all switch to Allo a month from now and Apple's hard work would be pointless and useless. In that case, at least everyone can have the schadenfreude of me complaining about Bing for a year.

Disclaimer: If Apple ports iMessage to Android but doesn’t directly inform me that Tim Cook was persuaded by my argument, I’m totally not going to use Bing for a year. I’m not a masochist. The ball is in Tim’s court.