Pebble is launching a Happiness app and sharing its fitness algorithms

Pebble is launching a Happiness app and sharing its fitness algorithms

Pebble made health tracking a priority with the launch of its Kickstarter for the Pebble Core, Pebble 2, and Time 2. Yesterday, it updated its Health app to make it more accurate, and today, the company is releasing two of its fitness algorithms to the public along with a mood-tracking app. One algorithm helps detect motion and the second counts steps. You can read all the technical details in this Medium post. Nathaniel Stockham, a Stanford PhD student and Pebble collaborator, says he made the algorithms available to "encourage the use of a standard set of measures." Other fitness wearable companies, like Fitbit, haven't released their algorithms.

Pebble's work with Stanford goes deeper than its algorithms. The company's also coordinating with the university to launch its new mood-logging Happiness app. The app operates in one-week cycles where it'll prompt users to rate their mood and energy level every day. It'll also ask for some details about who they're with, where they are, and what activities they've done recently. Pebble then aggregates that data into an emailed report. The company says it won't use or share any provided data beyond the app, but could analyze it in aggregate. Some Pebble employees tried it out and claim it helped them make tangible changes in their life, like socializing more with coworkers. 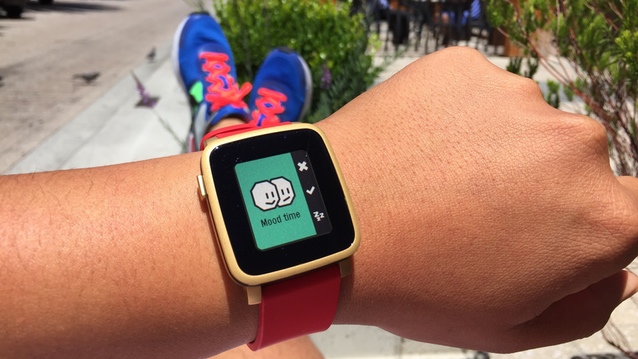 All of Pebble's moves taken together suggest the company is really serious about its fitness-tracking ambitions. While other mood trackers exist, as well as health apps and wearables, Pebble appears to want to be the most open and out about its endeavors. Or maybe it just wants everyone to use its standard when developing apps.