Cat S60 review: a rugged phone that can see in the dark

A niche device without all the sacrifice

Owning a smartphone means you’re also privy to the very particular fear of dropping that smartphone. And many of us go different lengths to mitigate this problem. Some of us slap our phones in big, fat, protective cases. Others are like me — we lie to ourselves and pretend we’ll be fine without one. Some companies offer a third option: they build rugged versions of their smartphones, sacrificing looks and performance in the name assuaging that fear.

The new $599 Cat S60 — yes, Cat, as in Caterpillar the construction company, though the phone is made by a company called Bullit Mobile — falls into this last category. It’s an extremely rugged phone with an extra niche twist thanks to a very unique feature: it’s the first phone with a built in thermal camera.

Phones with wild features and extra protection typically ask their users to compromise somewhere else other than just general design — they come with cheaper, outdated processors, or run old software. It’s why they’re often owned either by people with jobs that require a phone that can take a it, or the most accident-prone users. The Cat S60 isn’t going to change that, but it is much more well-equipped than many of its rugged predecessors, to the point that — alongside the recently released Samsung Galaxy S7 Active — it feels like it belongs to a new guard of niche smartphones that don’t require those same sacrifices. If you need, or want, a phone like the Cat S60, you won’t be disappointed. 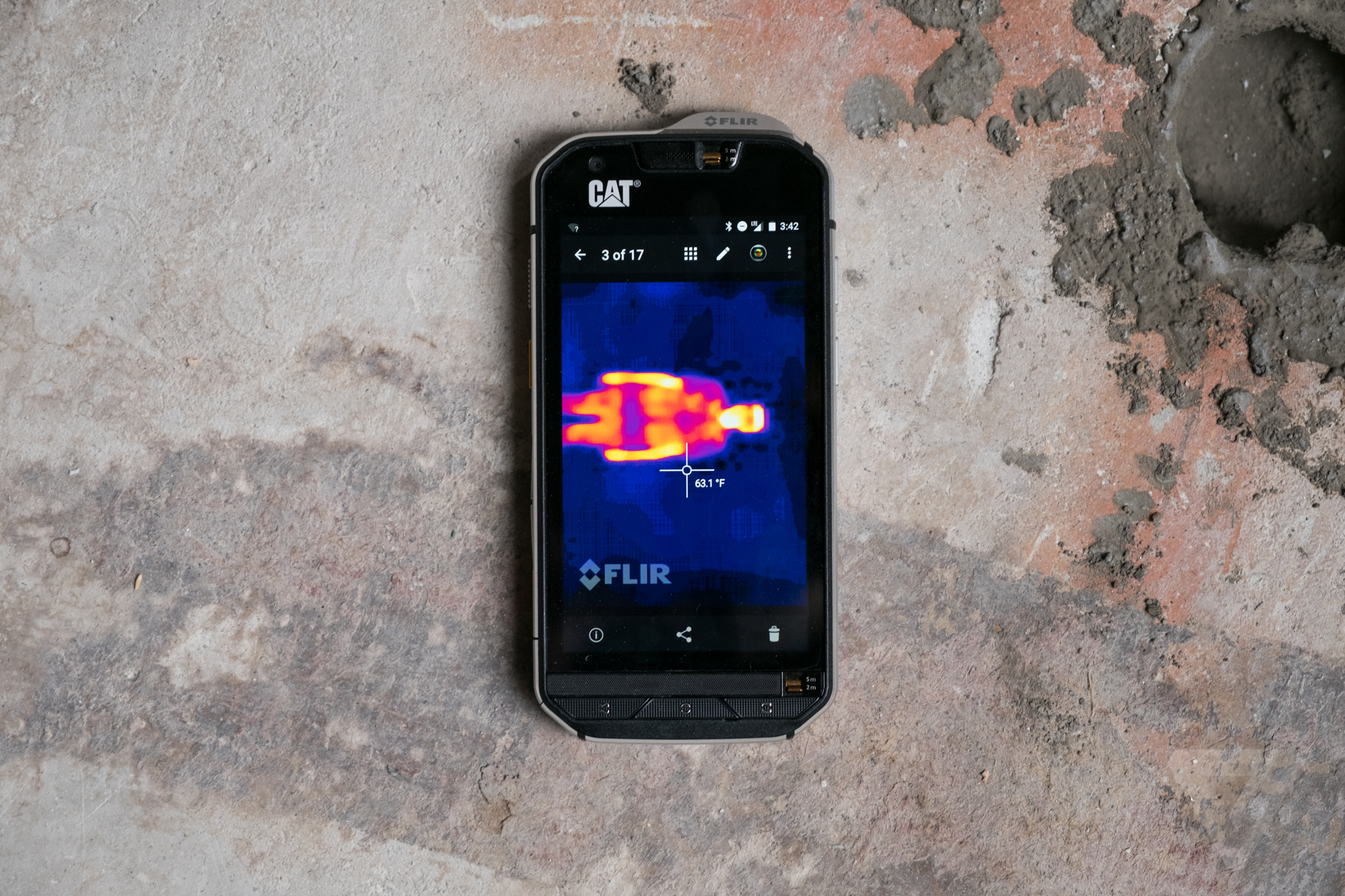 The Cat S60 feels indestructible from the moment you pick it up. The stainless steel and carbon fiber frame alone are enough to convince you that it's going to be just fine if (and when) you drop it. But the spec sheet backs this up, too. The phone is drop proof from up to 1.8 meters (6 feet). There are a handful of physical buttons and ports, but it’s still waterproof up to 2 meters — 5 meters if you flip the little gold switches on the front-facing speakers that help block out more water. You can even use it in temperatures as cold as -13 degrees Fahrenheit and as hot as 131 degrees Fahrenheit.

The phone achieves this level of protection and rigidity by employing a significant amount of bulk. It’s almost 13mm thick, and it weighs 225 grams, or about 1.5 times the weight of an iPhone 6S. That’s heavy enough that, for the first time in as long as I can remember, I actually noticed the weight of the phone while I used it. I’d lift the phone from my pocket, and within a few scrolls through my Twitter timeline, I was already tired of holding it up. 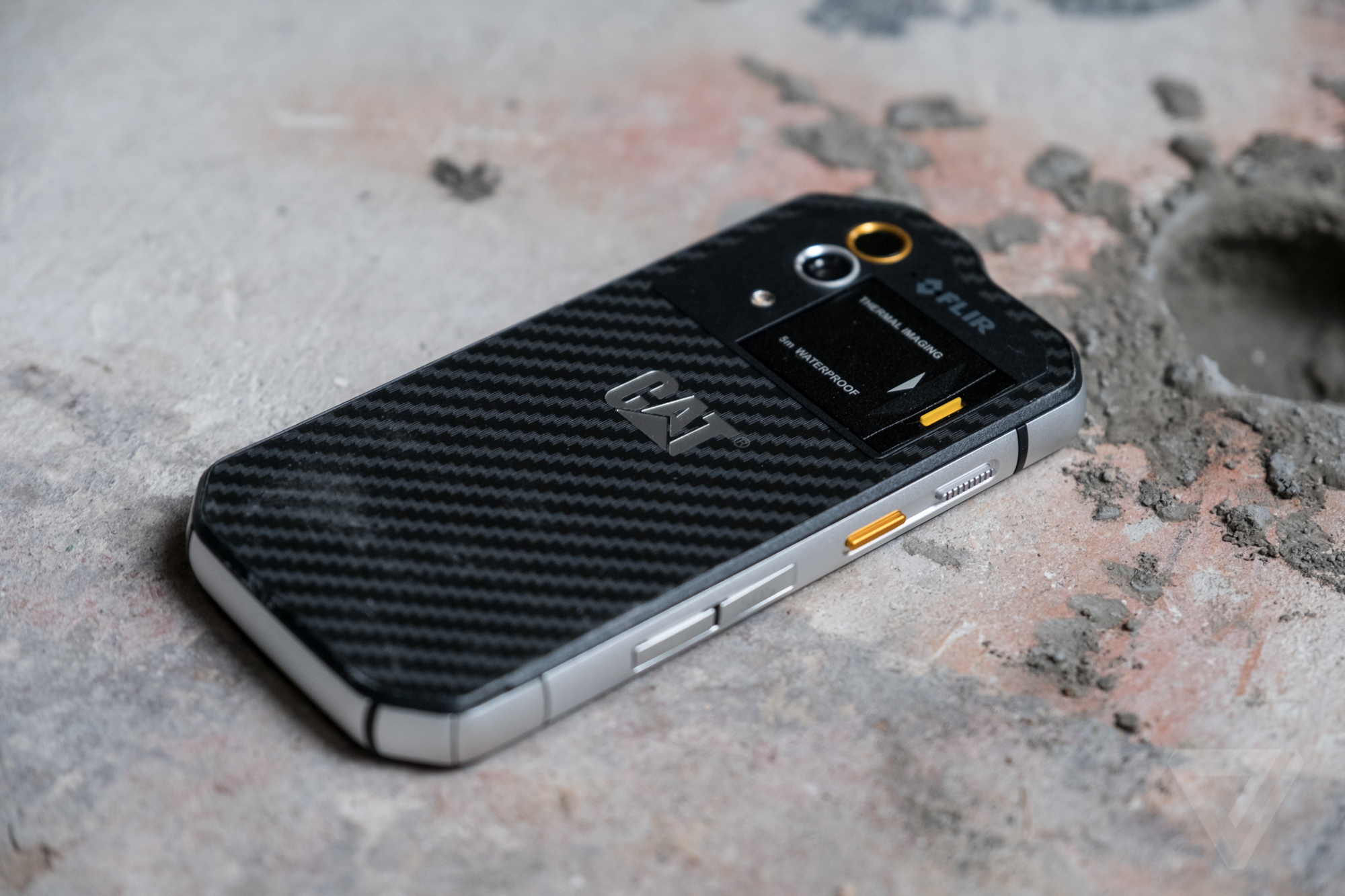 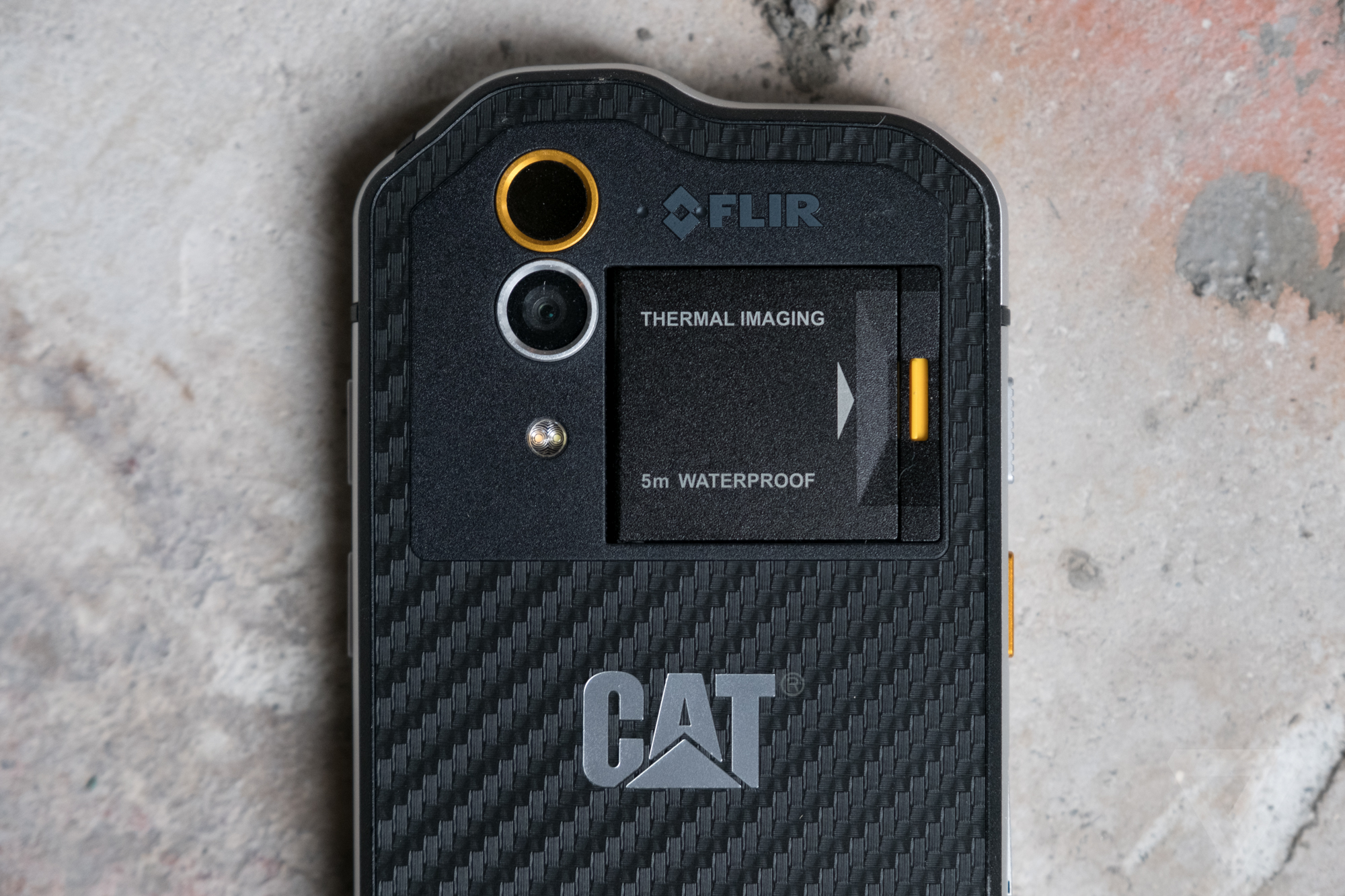 What really makes the Cat S60 stand out from other rugged phones, though, is the thermal camera. The technology is provided by Flir, a company that has spent decades building thermal imaging hardware and software to everyone from the US military to Formula One. But Flir has recently been pushing hard into the consumer space, announcing a pocket thermal camera at this year’s CES and a handful of smartphone products over the last few years, most notably the Flir One — a thermal camera dongle — last summer.

The chip inside the S60 is the same one found in the Flir One, and as mobile thermal imaging goes, it works really well. It can identify heat signatures of objects (or animals) up to 100 feet away within a range of -4 to 248 degrees Fahrenheit. The 640 x 480 VGA resolution isn’t great, but there’s a second, standard 13 megapixel camera on the back, and the Flir camera app takes the detail from that and overlays it on the thermal image, adding some clarity to the blobs of heat that you’re looking at.

You have to use that Flir app to take any thermal images — the default Google camera app is still accessible through the lock screen, and that’s where you can access just the 13 megapixel rear (or 5 megapixel front-facing) camera — and while it’s a bit sluggish, it’s packed with features. You can swipe your finger across any thermal image that you’ve taken to see a (admittedly low-res) visible-light version of the same scene. You can also drag markers on to the image to measure the temperature of specific objects in the photo, or just gauge the overall temperature of the scene. You can do all this stuff in real time, too, but the real value comes in how the app stores all this rich data in the images you take, keeping it easy for you to access whenever you might need it.

Much like when I spent a few days playing around with the Flir One, though, I never really found much use for the thermal camera. It’s definitely fun to take thermal portraits of people, or especially my dog, and it never hurts to make sure that I’m not losing all the air conditioning out the window of my apartment in the middle of summer.

The thermal camera is a good party trick, but some will find it useful

Of course, that’s because the Cat S60 isn’t really for me. And it’s also probably not for you. Caterpillar and Flir are marketing at people with extremely specific needs, like park rangers who want to be able to spot animals in the dark, or people who remodel homes and need to check for leaky pipes or drafty windows.

Those people now have an option that they never really had before. The Flir One was one of the first real consumer devices in this space that didn’t cost thousands of dollars, and now you can get the same technology in a phone that can take a beating.

The best part is that if you need those two things in a phone, the Cat S60 offers them without a ton of compromise. The Snapdragon 617 processor inside is fast enough to run just about anything you want to bring up on the 4.7-inch, 720p screen. There’s 3GB of RAM to help out, too, and 32GB of onboard storage with the option to expand that with a microSD card. The S60 has a 3,800 mAh battery that got me well past a day with each full charge, and it even ships with Android 6.0 Marshmallow. 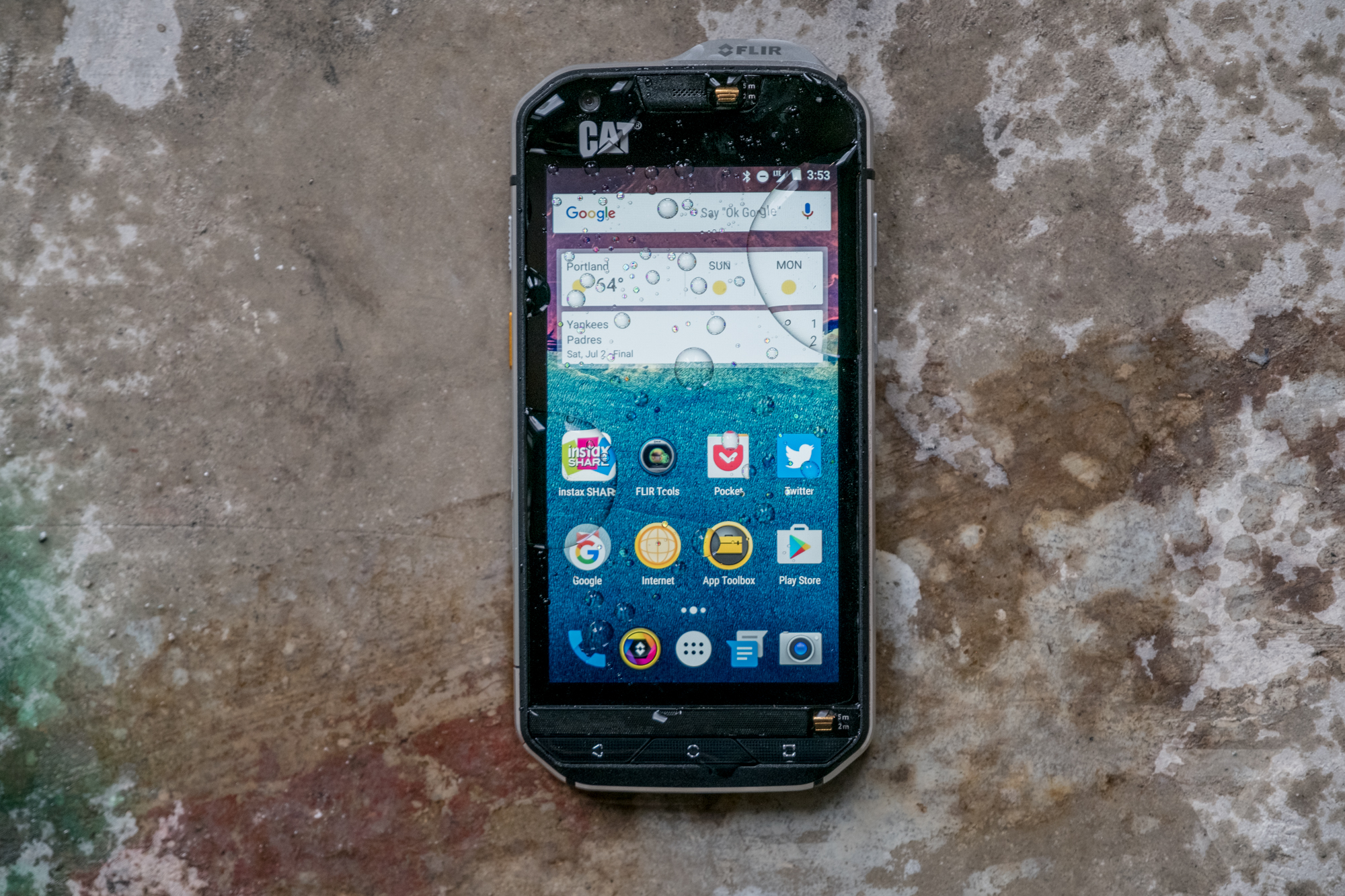 The Cat S60 isn't the best-performing rugged phone that’s currently on the market — the Samsung Galaxy S7 Active has better specs across the board, a far better screen, a fingerprint reader, and the company’s industry-leading camera tech. But the S7 Active's ruggedness isn’t quite as robust, and it definitely doesn’t have a thermal camera.

In some ways, the S60 is exactly what Android was started for in the first place. Caterpillar, Flir, and Bullit Mobile had a platform available to them that they could use showcase their hardware. And because of this, they created a phone that will serve an extreme niche set of users in a number of ways.

The rest of us will just look at the S60 with little more than passing curiosity, opting as always for shinier, sleeker, faster, and cheaper options.