I’ve fallen asleep in some seriously public places over the years, like on the subway and in college common rooms. When I look back on it, that was a crazy thing to do. I really had faith no one would steal my wallet or cut my hair while I was away from the real world. Sleep is a mysterious time that I love, so when I got a pitch for the ZEEQ smart pillow, I knew I had to try it out.

The pillow, which launched on Kickstarter today, comes with eight speakers, a microphone, a three-axis gyroscope, and a 5000 mAh battery tucked inside it. The pillow can detect snoring through its microphone, register motion with its gyroscope, and play music through its speakers. ZEEQ’s creators told me their inspiration came from their own sleep experiences. One of the creators falls asleep to music, for example, but his wife doesn’t. He needed speakers inside his pillow so only he could hear his bedtime soundtrack. Both creators are also snorers whose wives often elbowed them to wake up when they were too loud. But now, their pillow vibrates when it detects snoring to nudge them into switching positions. 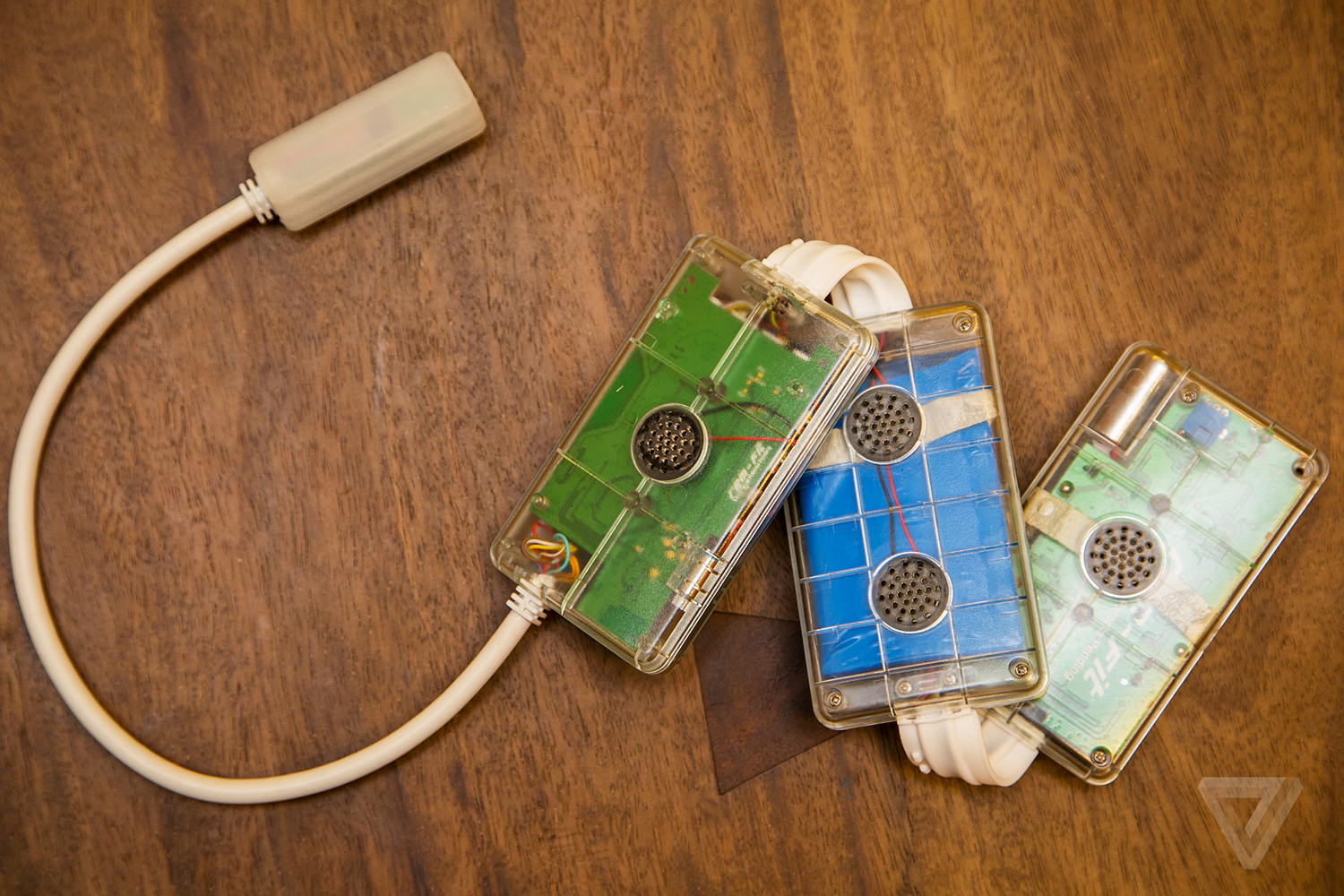 All the data ZEEQ collects is compiled on a companion iOS and Android app. The data is also put into an algorithm that somehow generates a sleep score every night that tells you how well you slept and for how long you were in "deep sleep." The creators didn't give me much in the way of concrete algorithm details, but I'll discuss that more below.

The app is where you set a morning alarm and decide what music you want to hear at night. Music can be anything that's locally stored on your phone. You can also log into Spotify from the app to play music from there, but I didn't feel comfortable entering my account credentials. The alarm includes a feature called "Smart Wake" that allows the pillow to wake you up earlier than you intended if it feels that it'll be a more ideal time. I never experienced this during my testing.

ZEEQ also comes with a nightly survey that will eventually grant you more insight into your sleep habits. The questions center around lifestyle choices, like how many drinks you had that day or how much you exercised. The app might soon be able to offer concrete suggestions on how to improve your sleep based off decisions made earlier in the day. 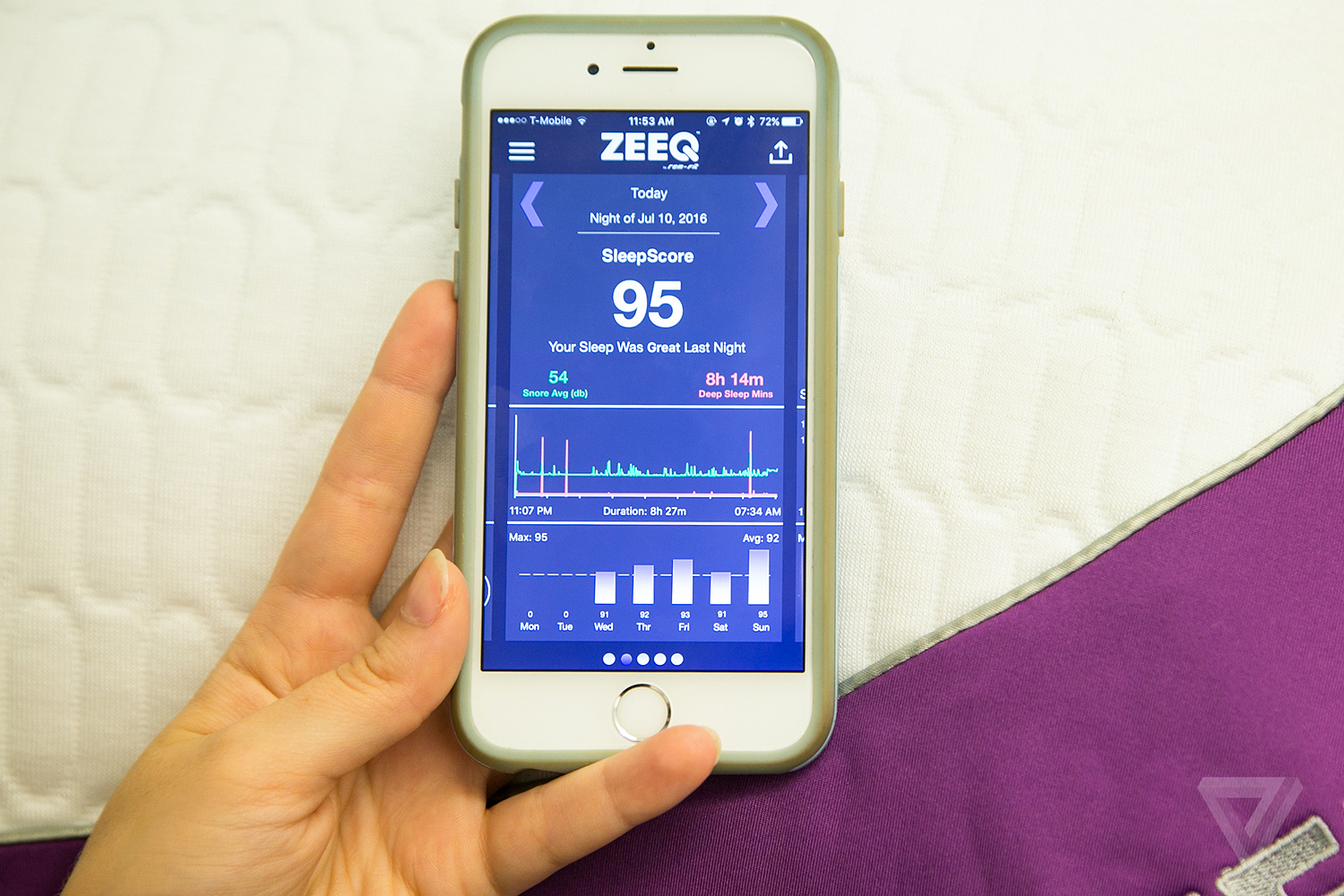 The pillow itself is massive but comfortable. My old pillowcase fit over it, sort of, but it was a struggle. You can supposedly remove filling from it, but that seems messy given that the foam is shredded into tiny pieces that I'd prefer not to inhale. It's made of memory foam, a "comfort filling," and comes with a washable pillow case that has ZEEQ's logo on it. (It's pictured in these photos.)

It does bend, and its speakers continue to work in that position. I never felt the pillow overheat, even with that massive battery, but I did turn it off whenever I left the house. I also never had to charge the pillow during my testing. 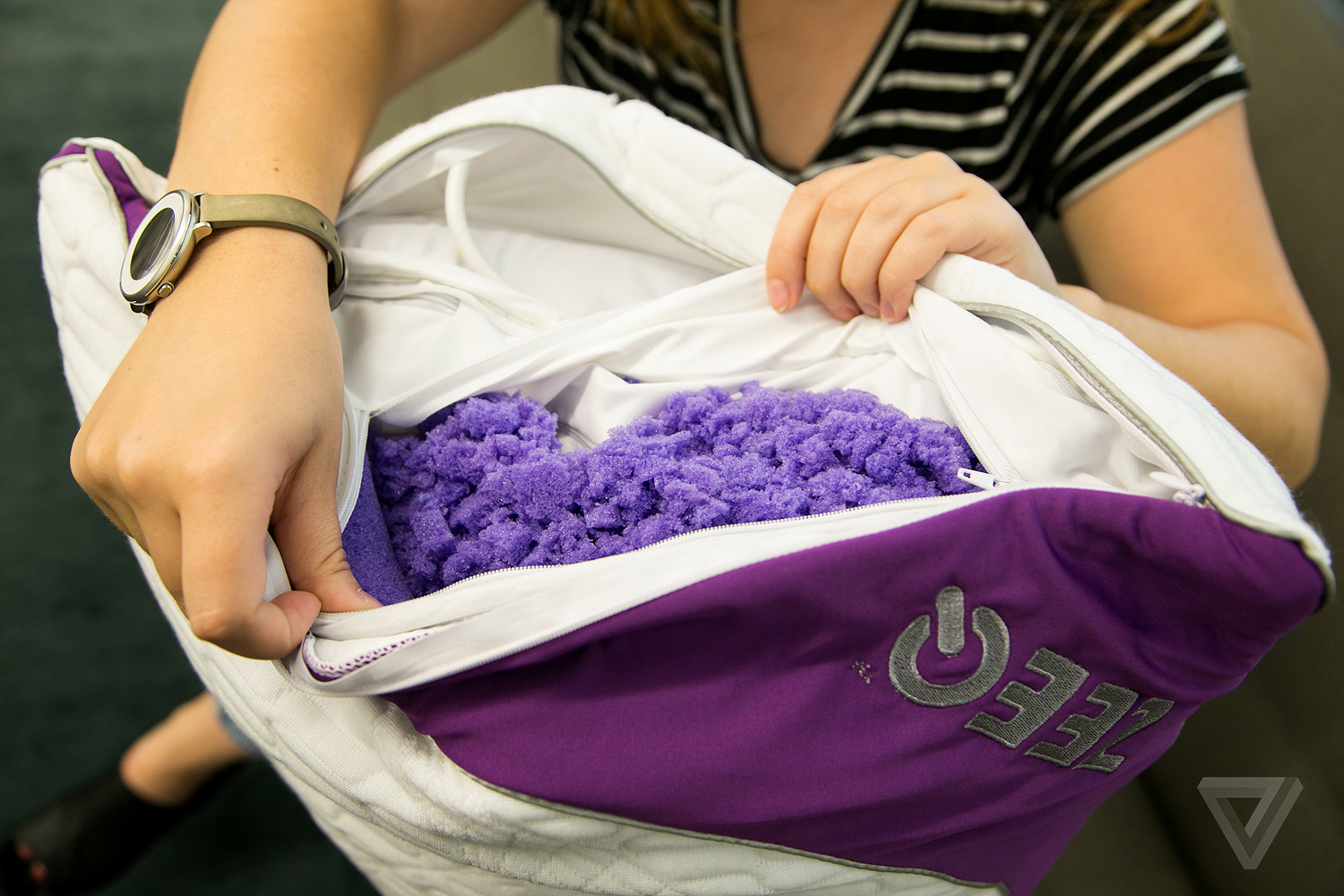 I slept on the ZEEQ for the past five nights, and overall, my experience was fine. The speakers, when I could get them to pair with my phone over Bluetooth, worked well. I could hear music only when I had my head pressed against the pillow. The motion detector worked, I guess? There's no way to accurately check because, well, I was asleep.

I struggled to get ZEEQ to work 100 percent of the time every night, though. I was working with a prototype, so there are still kinks that need to be worked out, but I do believe connection problems are the reality of dealing with smart devices — Bluetooth isn't great, so getting devices to pair can be a struggle. Another reality is that the last place I want to struggle with technology is my bed right as I'm trying to go to sleep. I often struggled to get it into sleep mode and then, once awake in the morning, I typically forgot to take it out of sleep mode. 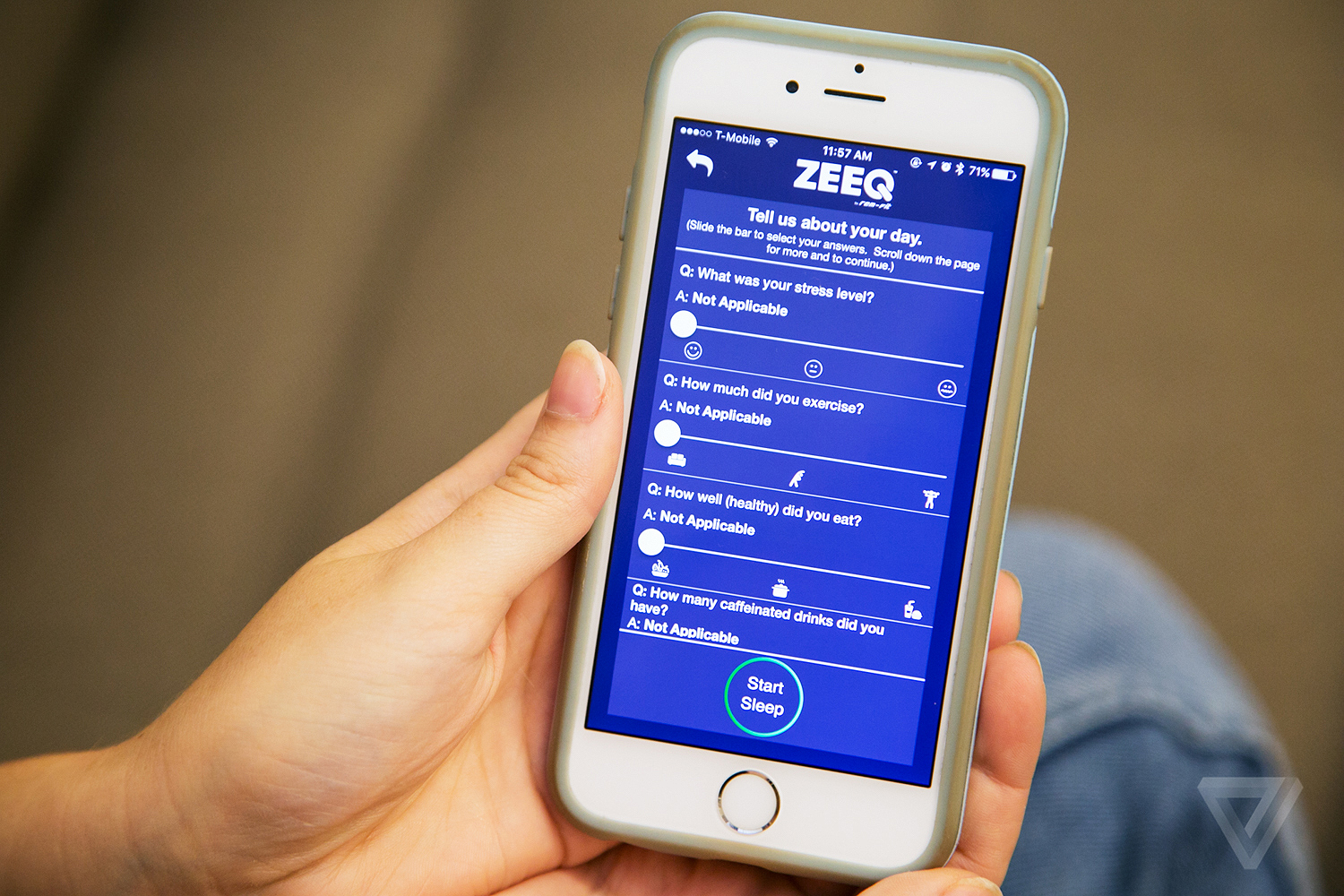 As for the data and my sleep score, I completely failed to see how it was accurate. Users don't wear a heart rate monitor, so that can't be a factor in ZEEQ's algorithm. Motion detection and snoring doesn't seem like it would really paint an accurate picture of a night's sleep. For instance, I sleep in a room without air conditioning. (I know, pity me.) One night with ZEEQ, I was so hot that I had to move into the living room where there's A/C. The pillow's motion graph spiked at the time I moved, and in the morning, ZEEQ told me I had a great night's sleep. I had actually had the worst night's sleep. I also live in New York City and saw spikes on my snoring chart throughout my use. Those were definitely car alarms or ambulances driving by. Granted, these are especially specific circumstances, but I think it illustrates an inherent problem with data points.

I talked to Raj Dasgupta, a sleep doctor at the University of Southern California, about this and he too seemed skeptical. To determine whether a person is in REM sleep, doctors rely on eye movements. The pillow clearly doesn't do that. ZEEQ hedged a bit by not picking specific sleep stages, but instead using the term "deep sleep." Dasgupta told me that certain breathing patterns and a lack of movement could indicate REM sleep, so it's likely that's what ZEEQ is using to determine whether a user is in deep sleep. Really, though, it's a "best guess," he said.

Oh, and there are already hundreds of apps and products to help with your sleep. Your phone also has a gyroscope, microphone, and speaker built into it. So, in theory, apps could produce similar data points. I haven't tried any sleep apps before, though, so ZEEQ was my first foray. 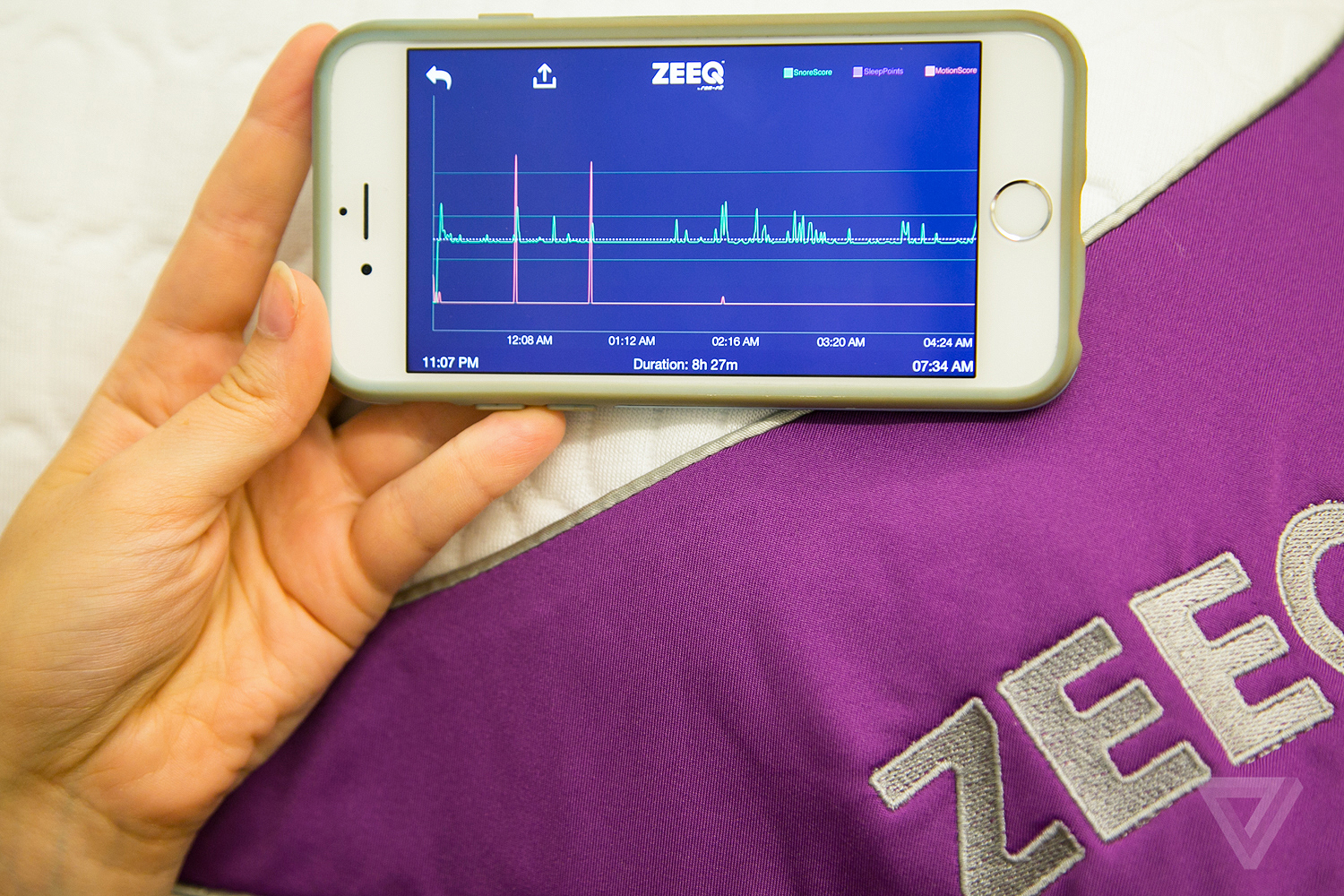 Now, I'm not the ideal consumer of this pillow. I never have a problem falling asleep; I don't snore; and I'm usually sleeping alone in my bed. If I wanted to listen to music, I could blast it in my room and no one would care. If snoring was a real issue for me, I would probably go see a doctor.

I also wasn't completely comfortable with radio waves traveling through my brain during the night. Yeah, radio waves constantly zip around us, but something about having them right under my skull feels wrong. This is obviously all on you, though. I could be a freak for not feeling completely at ease with the idea.

ZEEQ is probably best if you're a snorer and like to listen to music. Its speakers work and it detects snoring. Personally, I'm going to stick with my unconnected pillow; sleep can remain a mystery to me. ZEEQ will eventually retail for $300, but early bird offers start at $99.

Photography: Amelia Holowaty Krales / The Verge
Back to top ^