If the future involves me riding my luggage around an airport, I'm here for it

If the future involves me riding my luggage around an airport, I'm here for it

I’ve received multiple pitches for smart luggage; it’s pretty common now. (Just look at this past coverage.) That doesn’t mean I can’t be surprised, though. Take the pitch I received for the Modobag. It was different. Yes, it’s carry-on luggage that comes with USB ports for charging and real-time location tracking, but it’s also a rideable. Say what? I know.

Yep. The bag reaches up to 8 miles per hour. It launched on Indiegogo today with early-bird pricing starting at $995. That’s nearly $1,000 for a single piece of luggage. But it’s also a rideable, so. For comparison’s sake, Bluesmart’s signature connected bag costs $549, and Raden’s larger smart bag is priced at $349. A Razor hoverboard is $428.

Modobag says it's approved by the TSA and FAA, which is interesting considering that hoverboards are banned. There's probably still a chance someone will get stopped during a security checkpoint because of the bag’s battery. Modobag also weighs 19 pounds, so backers will definitely want to ride it because who is lifting or dragging more than that weight while running through an airport?

I think I’ve given you the necessary specs to come to a decision about whether you’re interested in backing this project, so with that, here are some gifs and photos. They’re a beautiful, beautiful thing. 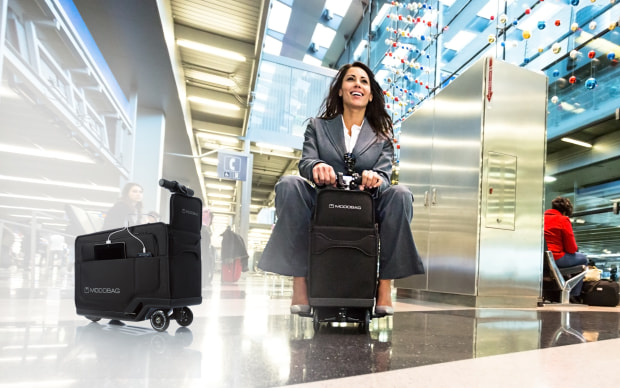