Get your headphones ready

LG just announced the V20, a successor to last year's V10 smartphone. In 2015, the V10 stood out for its unique, sturdy design, a great camera, and audiophile-grade music playback. LG has retained two of those strengths and introduced others for the sequel. And as we already know, this is the first smartphone to run Android 7.0 Nougat out of the box. It's set to begin rolling out globally this month and will be available in three color options: titan (dark gray), silver, and pink. Specific pricing will vary by carrier.

The V20's outward appearance is much closer to this year's G5 than the V10. The grippy rubber back has been replaced by smooth aluminum with a fingerprint sensor / home button where your index finger naturally rests. A button on the phone's right side lets you pop off that metal backplate and replace the phone's battery in seconds, but this device isn't at all "modular" like the G5. There are no "friends" or add-ons to slot into the bottom.

The design feels a lot more G5 than V10

The durable stainless steel side rails — another standout of the V10's design — are history. Further, LG chose to make the top and bottom segments of the phone from silicon polycarbonate, a decision that might disappoint some after the build quality questions that arose with the G5. It doesn't feel as substantial as the V10 before it, but LG insists that the V20 can withstand everyday drops without incident thanks to that silicon polycarbonate material. It's rated MIL-STD 810G drop and shock resistant.

Despite those big design changes, the V20 does bring back one signature from the V10: its second screen. To the upper right of the primary 5.7-inch QHD IPS LCD display is a tiny horizontal screen that shows app shortcuts, notifications, and gimmicks like a personal signature. The second screen is useful in that it frees up the primary display for content and gives notifications their own dedicated space. This time LG says the second screen gets brighter and has improved contrast over the V10. Just like last time, you're free to turn it off completely if you so desire. But some other software tricks are tied to the second screen. If you've got the signature feature turned on, for example, LG uses the first letter you've chosen for custom wallpapers. It's a weird, silly feature that most people won't even realize exists.

On the inside, the V20 checks all the boxes for a 2016 flagship: Qualcomm Snapdragon 820 processor, 4GB of RAM, and 64GB of storage. The increase in storage is great to see here, just as it was when Samsung bumped the Note 7's default to 64GB earlier this summer. Hopefully other Android makers follow along — at least when it comes to premium phones. The V20 supports microSD cards up to 2TB, and the (replaceable) battery is rated at 3200mAh. That capacity doesn't quite match the Galaxy S7 Edge or Note 7, but there's no faster way to go from zero to 100 percent than swapping out a dead battery for a fully charged spare. If you do get caught without another battery to put in, the V20 is Quick Charge 3.0-compatible through its USB-C jack. Battery swapping comes at a cost, though; the V20 doesn't offer any kind of water resistance, so it's unlikely to survive an unexpected swim.

LG is very eager to talk up the V20's audio chops as well. It features a 32-bit quad DAC setup that should make for sublime headphone listening, though we haven't had an opportunity to test out that experience just yet. Still, whereas Apple is reportedly mere hours from ditching the headphone jack, LG is in a mindset of "look at what's still possible." The V10 was already a winner there, and LG is definitely trying to appeal to the audiophile crowd with this series. Bang & Olufsen helped fine tune playback performance, and audio nerds will also appreciate 72-stage volume control and support for all the popular lossless music formats including Apple Lossless. And LG claims the microphone setup inside the V20 can record everything from voice memos to loud rock concerts without any distortion or clipping; when shooting video, you can even choose to save the audio side as lossless to preserve the highest quality possible. 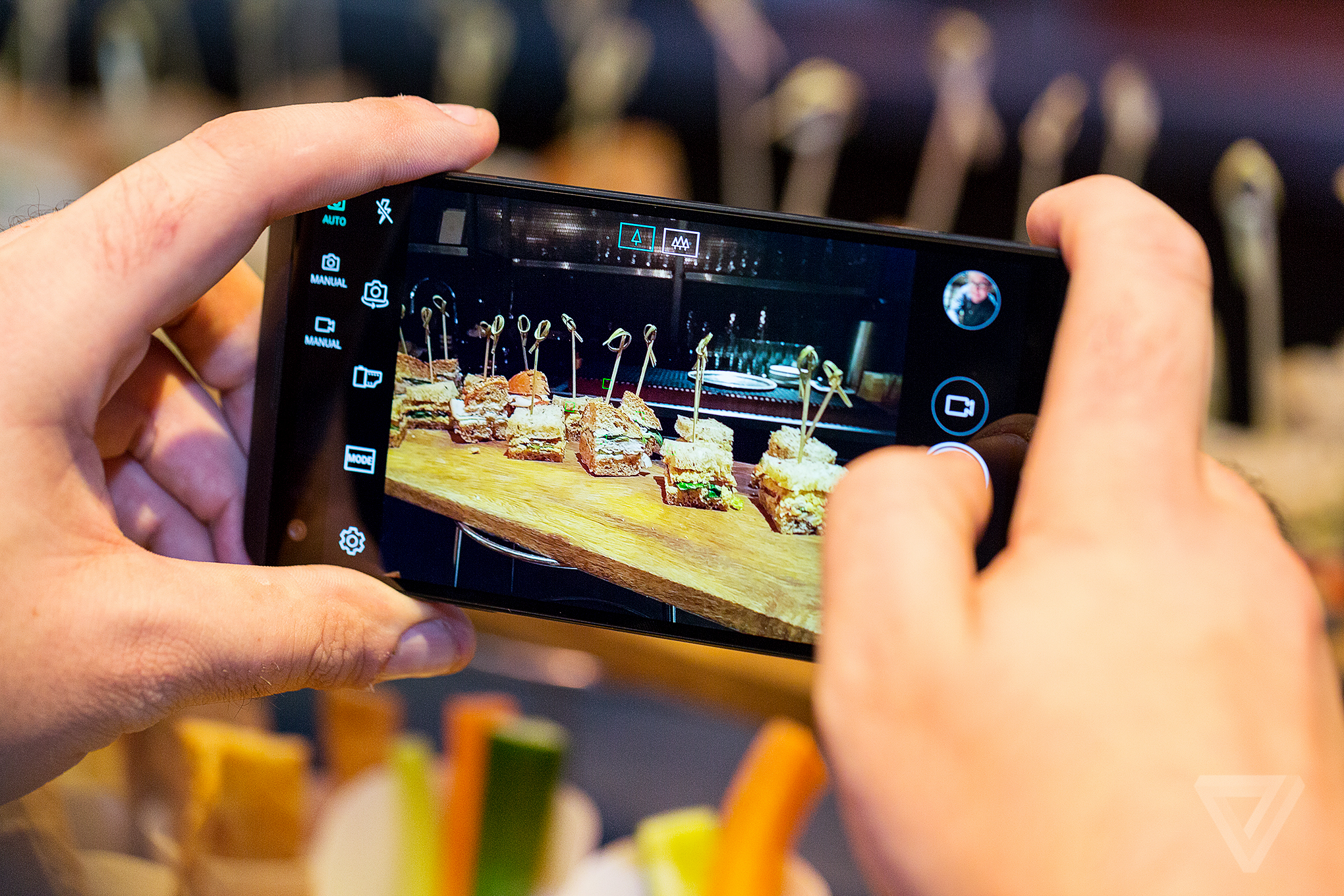 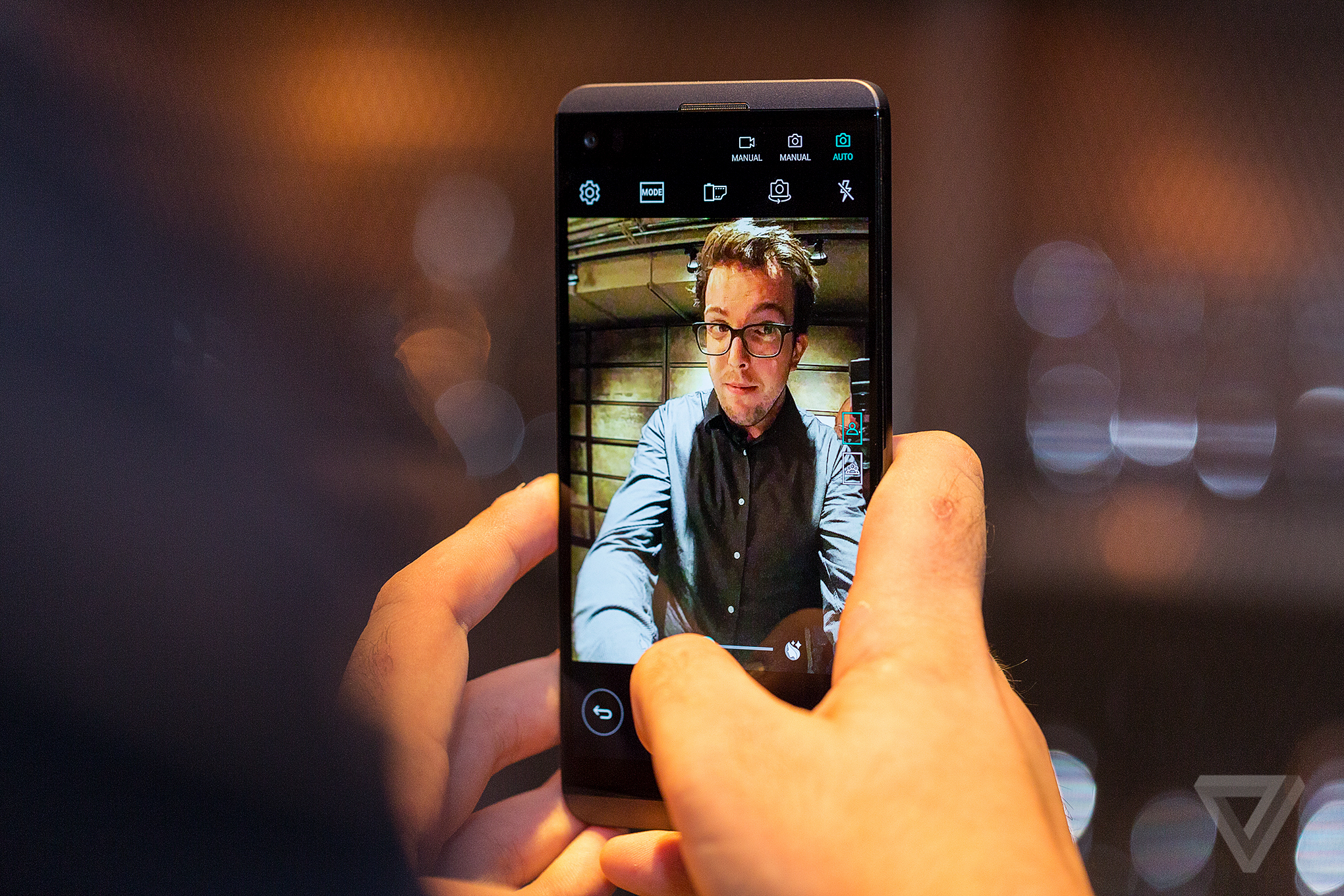 Speaking of the cameras, LG has done away with the V10's two selfie cameras. This time you get a single 5-megapixel f/1.9 wide angle shooter on the front. The dual-camera approach has instead been moved to the V20's backside, which includes both a "standard angle" 16MP sensor with f/1.8 aperture and optical image stabilization, plus a much wider 8MP camera with an aperture of f/2.8.

At a recent press preview in New York City, LG executives actually focused on the V20's video recording more heavily than still shooting. Video stabilization is handled by Qualcomm's Steady Record 2.0, which uses data from the phone's gyroscope to minimize shake by cropping into the frame a bit. The company also claims that the V20 all but eliminates common video distortion like rolling shutter. The camera app provides deep manual controls for both stills and video, as you'd expect from LG. You've got nearly every option you could want, from the usual shutter speed and ISO settings all the way to setting your preferred video bitrate. But it was impossible to judge camera output during our brief hands-on, so we'll need more shooting time to determine how LG fares against impressive competition.

Both Google and LG have been making a big deal about the fact that the V20 runs Android 7.0 Nougat out of the box. If you don't have a Nexus and are too impatient to wait for the next Google phones and whatever else is to come this year, this is your ticket in. LG boasts that it's the first phone anywhere to feature Google's new In Apps feature, which is supposed to help you "find content not only from built-in apps including contacts, emails, text messages and photos, but also from user-installed apps."

But don't expect anything close to stock Android. LG's custom skin is still on top of everything, and while some other Android OEMs like Lenovo / Moto have been cutting down on duplicate apps, LG remains happy to include multiple options for gallery, music, and so on. The HD Audio Recorder app is unique and serves a distinct purpose, but this company could really stand to do some software thinning elsewhere. Plus, Nougat features like split-screen multitasking don't feel as new with the V20 as on the Nexus line since LG has offered this functionality before. Support will be much better at the system level, but more troubling is LG's uncertainty around whether or not the V20 will be compatible with Google's Daydream VR efforts when those are ready to kick off.

So my brief first impression of the LG V20 is that it's a powerful smartphone designed for audiophiles and those serious about creating content like videos and hi-fi audio recordings. Based on specs alone, it seems like a worthy successor to last year's V10. Having a swappable battery is great, and it's nice to see LG carrying that convenience forward. But the phone's appearance has lost some of what made the original stand out, and it also lacks useful everyday protections like water resistance. Whether you like LG's software is a matter of personal taste, but it's disappointing that the company isn't committing to Daydream VR. And who knows how long it'll take for future Android updates to reach the V20 — even if it's shipping with Nougat right now. That said, we're looking forward to giving the V20 a thorough review very soon. It just might prove a winner yet.