It really needs Spotify, though

Share All sharing options for: Sonos One review: Alexa has never sounded better

The Sonos One is what I’d call an inevitable product. Sonos has always made speakers that sound excellent, and if you own more than one, the company’s multi-room wireless audio system can fill your entire home or apartment with that top-notch sound. Sonos’ reputation makes consumers gravitate to its products, and in turn, they get locked in and are likely to become repeat customers when it’s time to put a speaker someplace else.

Recently things have changed, however, and Sonos no longer finds itself in such a cozy position. Over the last couple years, the expensive Sonos lineup has lost the spotlight to affordable, voice-controlled speakers like the Amazon Echo and Google Home. Soon Apple will release its own take with the HomePod. Convenience and ease of use have always been the draw of the Echo and Home. Being able to just tell a speaker to play your favorite Spotify playlist goes a long way in compensating for mediocre sound.

But all of a sudden, Amazon, Google, and Apple are in the midst of releasing speakers with better audio. Right on cue, Sonos is finally answering back with the $200 Sonos One. It’s the company’s first speaker with microphones designed to work with today’s popular voice assistants. Alexa is built in right now, with Google Assistant to follow in 2018. If Sonos can deliver great sound quality while supporting all things voice, why would anyone consider buying something else?

There’s the price, for one. $200 is a fair amount of money — apparently a bar that Sonos won’t go under — and double the cost of the new $100 Echo, which lists “improved sound” as its most significant upgrade. Here’s my advice: if you want a smart speaker for a bunch of neat smart home tricks and occasional music listening, the new Echo should fill that role pretty well. But if music is what you care about most and you might be interested in expanding to a whole-home system down the line, the Sonos One makes a lot of sense. Keep in mind that despite Alexa’s many skills, most people are using these speakers for music. You’ve also got Apple’s $350 HomePod and Google’s $400 Home Max coming in December for even more money.

The Sonos One sounds (and looks) nearly identical to the existing Play:1, which already delivered a much richer and more satisfying listening experience than any Echo. Only now, you can ask this new speaker about the weather, have it control your smart home, or command it to start blaring your latest playlist by calling out “Alexa.” You can accomplish the same thing with an Echo Dot connected to Sonos speakers you already own, which is a good option for existing customers. But with the One, everything is integrated.

There are some early frustrations and missing features that prevent the Sonos One from being a perfect marriage between Sonos sound and Alexa’s voice smarts. You can’t yet play music from Spotify with Alexa, but I’ve been told that’s coming “soon.” Other services, such as Apple Music and Tidal, are absent with no ETA, and it’s quite possible that they’ll never support voice playback. They all work perfectly fine through the Sonos app, and once music is playing from any service, Alexa can always pause, skip tracks, adjust volume, or tell you what song or artist is playing. But the bottom line is that, at least for now, Alexa is unable to play anything from your Spotify library. Instead, you’ve got Pandora, Amazon Music, iHeartRadio, TuneIn, and SiriusXM to work with out of the box.

Even with the Spotify situation factored in, I’ve found the Sonos One to be good enough in most other places to earn a solid recommendation if you’re looking to spend a couple hundred bucks on an in-home speaker.

The Sonos One is the exact same size and weight as the Play:1 and largely shares the same external design. I’d say it’s nicer looking since everything is now the same color; the Play:1’s speaker grille was gray, but here the whole unit is either a uniform matte black or white. On top, the physical buttons of the older speaker have been replaced with capacitive touch buttons resembling those on the Play:5 and Playbase. Above the main play/pause and controls, there’s a microphone icon that you can tap to toggle the six far-field microphone array on or off. If the tiny circular light is illuminated, the mics are enabled. If it’s off, they’re inactive / muted and won’t respond to the Alexa hotword.

Another minor difference with the Play:1 is that Sonos has gotten rid of the rear screw hole that made it easier to mount as a surround speaker for a Playbar or Playbase. You can still use them as surround speakers, but it’s a bit harder to mount them on the wall now. As with past Sonos speakers, two Ones can be linked together using the app to form a stereo pair with a wider, more enveloping soundstage. A One and Play:1 cannot be stereo paired despite their similar looks and sound performance. (Sonos says it might change this with a future update if enough customers want it, but why not just offer it from the beginning?) The Sonos One is resistant to humidity and can be safely used in your bathroom for shower tune. But it’s not the fully weather-sealed outdoor speaker some Sonos customers have long asked for.

Setting up the One wasn’t as smooth of a process as I was expecting. Playing music from the Sonos app didn’t take long at all. With the living room covered by my more powerful Play:5 speaker, I mostly tested the One in my kitchen, which is probably the ideal location to have Alexa within earshot. Sure, an Echo Dot can handle your cooking measurement conversions, but if you want to listen to music while having your breakfast or making dinner, it’s got no hope against this thing.

The process of enabling Alexa was a different matter and left me, a tech reviewer, feeling pretty stupid. Alexa could answer general questions and control my smart lights just fine within minutes, but would give me a “Something went wrong” error when I asked for music (or podcasts) with voice commands. To fix this, I had to remove the Sonos skill from my Alexa app and then add it again, after which things worked as intended. I’ve still encountered some “I don’t know what went wrong” Alexa responses here and there, but they’ve mostly cleared up.

Even if I’d had no trouble, it feels like there are too many steps between unboxing the Sonos One and telling Alexa to kick out the jams. You set up your Sonos system, add your new speaker to that system, link all your music services to Sonos, link the speaker to your Alexa account, link those same music services from before to Alexa, and then have Alexa discover nearby supported smart home devices. That’s… a lot. Once everything is done, you’ll probably never have to muck with it again, but it’s still not a great first experience. Hopefully as the Sonos/Amazon relationship continues and as other speakers add Alexa, this setup process can be streamlined and made simpler.

All of that music sounds fantastic, though. Sonos claims that internally, the One was completely rebuilt “from the ground up” while sticking to the “blueprints” of the Play:1. Whatever that means, the two sound very, very similar. Like its predecessor, the Sonos One delivers balanced, detailed, and full-bodied audio that outperformed my expectations of a speaker this size. It’s perfectly adequate to fill a living room or kitchen with music, and you can crank it up to ringing volumes without much distortion or harshness. The Play:5 remains ideal for large rooms or parties, but the One is the best thing for most people to start on. Two Ones paired in stereo are even better and give a single Play:5 solid competition (at a lower total price, to boot).

The One’s six microphones consistently picked up my voice well enough without issue, though they seemed slightly less sensitive than the Echo Dot and its seven microphone array. When you say Alexa, the speaker plays a short tone to signal that it’s listening, and Sonos automatically lowers the audio volume to better hear you. Even with music blaring, the One will recognize the Alexa hotword without you having to shout. Fundamentally, the Sonos One succeeds at being a gateway to Alexa. It’s the same, familiar voice telling you the forecast or sports scores or whatever else you want to know.

For multi-room audio, you can tell the Sonos One to play music in a different room with an older Sonos speaker and it just works. I love that part, but it means you’ll want to be careful in deciding exactly where the One goes since it’s the only speaker you can talk to. I still occasionally feel stumped by random things when using Alexa, though. For example, I never found any app setting to adjust Alexa’s volume at night when my housemates were asleep. Eventually I just said “Alexa, lower your voice” and that seemed to work, but it made me feel pretty rude. Also, Alexa will usually announce which service it’s playing radio stations from, but doesn’t always make clear where it’s pulling music from at any given time. Pandora or Amazon? I’ve got no clue. Finally, not every Alexa feature you might use on an Echo works on the One. Most do, but not all. Making phone calls is still exclusive to Amazon’s own products, and even small things like daily flash briefings are still “coming soon.”

Next year, the Sonos One is supposed to evolve into something much bigger than the thing that goes on sale October 24th. Google Assistant support will somehow be added and live alongside Alexa, though the company hasn’t spelled out how it plans to cram those two onto a single product. And at some point, the One will also work with Apple’s AirPlay 2, so you’ll be able to tell Siri on your iPhone or iPad to play music on your Sonos system. But that’s all coming later, and you shouldn’t spend $200 on promises. For now, and probably over the next few months, the Sonos One will remain a very nice Sonos product with Alexa built in. Once the Spotify thing gets sorted out, that still makes for a fantastic gadget.

Our review of Sonos One 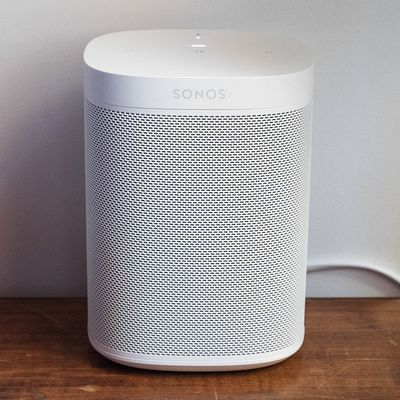