But that comes at a cost in more ways than one

“They don’t feel as bad as they look.” Maybe it’s the polarizing nature of Apple’s AirPods design — which, to be fair, has waned since they debuted last year — but I couldn’t stop myself from internally repeating this self-affirming mantra while I tested the $250 Bose SoundSport Free over the past week. They’re Bose’s first crack at truly wireless earbuds, and they’re surprisingly good at some of the basics.

But while I know I shouldn’t care that, from behind, they make me look like a cybernetic insect, it’s just hard not to be aware of how big these things are when I have them in my ears. Luckily, that doesn’t ruin the fantastic sound these earbuds are capable of producing.

Off the top, credit to Bose for getting the most basic thing right about truly wireless earbuds: they work really well. I know that sounds silly, but companies are still having trouble getting truly wireless earbuds to maintain a connection with a smartphone. And yet, I almost never experienced audio dropouts with the SoundSport Free earbuds. That they stick out of your ears surely helps, but regardless, they’re one of the best in this respect, nearly on par with the rock solid connection you get with AirPods.

And it’s great that they work well, because music sounds wonderful on the SoundSport Free buds. There’s depth and clarity that you wouldn’t normally expect to find on wireless Bluetooth headphones. Listening to the Punch Brothers, for example, I can hear Chris Thile’s fingers squeak as they slide around the strings of his mandolin, and the breaths he takes between lyrics. The earbuds translate the subtle dynamics of the band’s upright bass in a way you typically only hear and feel when you're in a room with one, even if it doesn’t thump you in the chest.

Switching over to something much different, like the Afrobeat sounds of MonoMono, shows that SoundSport Free earbuds have range, too. The chorus of call-and-response voices in the Nigerian band’s music sound distinct, not muddled together like they would on a pair of Beats or something worse. Other touches, like a Fender Rhodes electric piano or the occasional horn blare, have grit and character that is usually lost in translation on cheaper headphones.

The music of Margo Price, a rising country star, sounds so good on these that I’m actually a little less upset I missed her tour stop in New York City last week. Hell, even the thrashy, distorted guitars of punk rockers PUP sound better on these earbuds, and I’ve listened to that band so many times I figured I was done picking up on any nuance in their recordings.

I’ve never overly concerned myself with sound quality when it comes to truly wireless earbuds; the convenience and novelty of them has outweighed that for me in the early going of this product category. But these earbuds bring music to life in a way that exposes what I felt was decent sound on something like the Bragi Dash earbuds as a facsimile. These are easily the best-sounding truly wireless earbuds to date.

The problem is this all falls away if you’re using them in a noisy environment. I had to pause podcasts and music any time a subway rumbled by on my morning commute because of how much sound the open design lets in, or compensate by launching the volume to its highest heights — an option that is not sustainable in the long run if you want to keep your hearing intact. Unlike other headphones, which create a “seal” in your ear canal to block out external noise, the SoundSport Frees just rest in the outer part of your canal, similar to AirPods.

To be fair, this is always how the double-edged sword of open design headphones slices. It can, in quiet situations, make the sound feel more natural, as if the original sound is really hitting your ears. And, after all, it’s why companies that focus on open design headphones, like Grado, are successful with audiophiles.

The open air design is a double-edged sword

It also keeps you more aware of your surroundings, which is good in certain situations, like while you’re running. These are great for that — Bose is even advertising them heavily this way — especially because they’re also sweatproof and water resistant. There a better choice than the Jaybird Run earbuds, for sure.

But one of the core reasons to choose truly wireless earbuds in the first place is the convenience of a cord-free experience while you’re on the go. So if the paths you normally tread lead you through loud places, these are probably going cause a bit of a headache.

With video, the SoundSport Free earbuds can be fussy. They’re susceptible to noticeable delays whether you’re watching on your phone or a computer, though the experience is much worse on the latter. And I’m not alone in experiencing this. There’s already a thread full of complaints and claims of returned products in Bose’s forums, with customers saying they’ve been told this is “normal,” but that they also might be working on a software fix. We’ve reached out to Bose for comment and will update this post when the company has more information.

You might be able to get away with using them for a YouTube clip here and there when you’re mobile, and sometimes they do sync up better than others. But it’s hit-or-miss. I was never able to rely on them to work well for video.

These limitations mean the SoundSport Free earbuds are only really best suited for either listening to music in a quiet environment, or as a pair of workout headphones. Shorter listening settings are more flattering to these earbuds, anyway, since they’re not overly comfortable. They’re light, but I’m far more aware of their presence in my ears than I typically am with wireless earbuds. I also have to use the largest set of wing tips that come in the box, and after an hour or two of listening my left ear aches a bit from using them.

That means that, while the SoundSport Frees live up to Bose’s claim of about five hours of battery life, I can’t say I was ever eager to leave them in for that long. You may be able to mix and match the other included tips for a better experience, but the open design means the earbuds rely on the wing part to hold them in place, which makes them more susceptible to causing discomfort.

The SoundSport Free earbuds have five hours of battery life, but I wasn’t eager to leave them in that long

There’s also the matter of the price, which is at the high end of the wireless earbud market. It shouldn’t be a surprise; Bose always prices its headphones as premium products. But while they sound better than others, the earbuds are pretty straightforward. There are volume buttons on the right one, and one for play / pause and activating a voice assistant, which all works fine. They work alright for phone calls and the voice assistant, but there’s no fitness tracking or onboard storage, and again, they’re liable to give you trouble with video. I don’t think wireless earbuds necessarily need to brim with bells and whistles, but at this price it’s hard to excuse some of that not being here, and the same goes for versatility.

(What I hope is that Apple takes a cue from these, and maybe rolls out a pair of similar earbuds under the Beats brand with the W1 chip at or around the $169 price tag of AirPods. Even with an open design, that’d be an easier pill to swallow.)

As far as first efforts at making truly wireless earbuds go, this is one of the best, even if that’s because many others have been utter failures. The SoundSport Free earbuds have a rock solid Bluetooth connection that’s better than almost every other pair of truly wireless earbuds, and they definitely sound the best — but that’s only when you’re using them in the right settings.

So, that’s the equation that most people will have to solve when trying to figure out whether or not to buy these earbuds. If you want truly wireless earbuds, and you want the ones that sound the best, you’re going to have to live with the fact that they’re not all that versatile. If you sacrifice sound quality, you can find earbuds that work in more situations for less. Would you have expected anything else from Bose?

Our review of Bose SoundSport Free 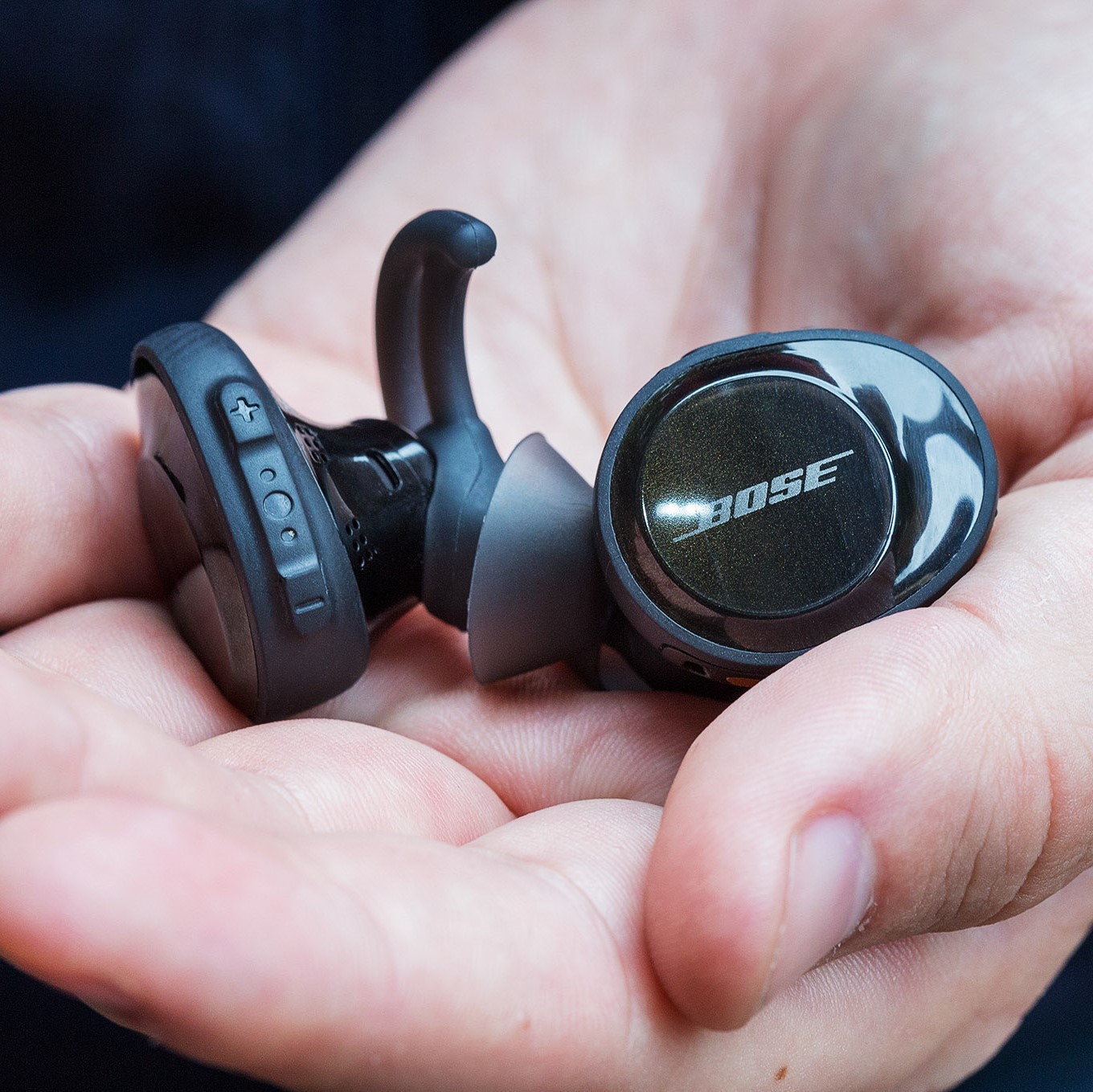