These headphones have no chill

Share All sharing options for: Pioneer’s SE-Master1 headphones scare me

I consider it my very pleasant duty to venture out into the world of extreme audiophile gear, the stuff that costs thousands of dollars, and report back on my findings. Not because I expect you to whip out your wallet and buy the latest thing I recommend, but because it’s fun to explore what money-is-no-object technology looks and sounds like. In most cases, it’s a thrilling ride, but sometimes it can actually get a bit scary. The Pioneer SE-Master1 headphones are an example of the latter.

Costing a princely $2,500, these are Pioneer’s very best headphones and they’re assembled by hand in Japan with all the obsessive care that the country’s craftsmen are famous for. I’ve got zero complaints about how these are built or how they fit. The Master1s are huge enough for their pads to never touch my ears, but they’re also light enough to be worn for many hours at a time. Even the memory foam in the pads is of a variable thickness so as to maximize comfort.

But as much as I enjoy wearing these headphones, I’ve come to dread listening to music through them, because they have no chill. The SE-Master1s are like that friend of yours who’s really lovely and caring but has a painfully shrill voice. You don’t spend too much time hanging out with that friend, do you? When I pick up this pair of cans, I have to grit my teeth, take a deep breath, and then press play with the volume turned down.

This frequency response graph, provided by Pioneer itself, lays out the cause of my distress. Pardon me for still having my hearing faculties intact, Pioneer, but those high-frequency spikes on the right are not fit for human consumption. Their effect with music is to turn the usually desirable sparkly high details into sharp little treble daggers that stab at my ears unexpectedly. I absolutely believe that a pair of headphones needs a prominent high end in order to feel exciting and dynamic, but Pioneer has put its emphasis on the least pleasant highs. The Master1s invert the order of priority in a lot of my favorite electronic productions, taking the background fizz and tinkles and putting them in the foreground where the big and meaningful bass drops are supposed to be.

With the Master1s, I find myself wanting to turn the music up to enjoy a richer, bassier sound, but when I do it, I get assaulted by the overzealous treble. The most annoying thing about listening to them, though, is that it’s not always terrible. These headphones are clean of distortion and provide a stalactite-sharp recreation of my music. I think they’re technically wonderful, but their tuning is just plain evil. They’ll give me a few minutes of cool tunes, and then just as I’m relaxing, they’ll drop a spike of harsh vocals on my head, with the singer seemingly screaming at me for trusting them.

In the smartphone world, we’ve known many a phone that is like the SE-Master1s: awesome hardware engineering and performance characteristics, but awful software that undermines the whole exercise. The trouble for Pioneer is that the Master1s aren’t going to be subject to any life-saving software patches in the near future, and at a price of $2,500 they shouldn’t be serving up such a compromised sound to begin with.

Our review of Pioneer SE-MASTER1 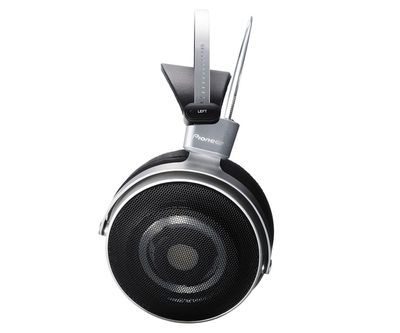