The arrival of Bluetooth 5, the newest version of the popular wireless protocol, has been hotly anticipated in the truly wireless earbud space. The faster data transfer and extra range that is supposed to come with the new spec could go a long way toward helping to solve some of the biggest problems with wireless earbuds — namely, connection dropouts and audio delay.

The first truly wireless earbuds with Bluetooth 5 come from Anker. The company known for its portable chargers announced and crowdfunded the Liberty+ wireless earbuds last year under a new “Zolo” line of products. The earbuds shipped to backers late last year and are finally now available to consumers for $150.

Bluetooth 5 makes a world of difference

After a few weeks of testing, it’s clear that Bluetooth 5 makes a world of difference in terms of reliability. The Liberty+ earbuds almost never dropped the connection to my iPhone X, and there is a negligible audio delay when using them to watch video — both mobile and on a laptop. These problems have plagued well-known makers of wireless earbuds, like Bose or Sony, but Anker has found a way around them with Bluetooth 5.

The earbuds only have about three hours of battery life, which is at the low end of what I prefer with truly wireless earbuds. But the charging / carrying case they come with makes up for this with two full days of extra charge, and the ability to quick charge an hour’s worth of battery life in about 15 minutes. I’d still prefer closer to four or five hours with the earbuds away from the case, but that much extra battery life combined with quick charging almost makes up for it.

The trade-off here is that the case is slightly heavier than most wireless earbud cases. It’s also not particularly slim. But it fits in most of my pockets, and the benefit of waiting a few extra days between having to charge the case was enough to make me forget about a few extra grams. The Liberty+ case sets a new standard for battery life in the wireless earbuds space — which, knowing Anker’s history, should come as no surprise. Here’s hoping the company finds a way to extend its battery expertise to the earbuds themselves next time around.

Battery life and connectivity are by far the best qualities of the Liberty+ earbuds. Everything else, though, is a mixed bag. The earbuds have a very bass-heavy audio profile that doesn’t sound particularly great for all types of music, and details in the mid and high-range frequencies are often mushy. Too frequently I would turn up the music in a feeble attempt to hear these missing details, only to be thumped with even more bass. The Liberty+ earbuds are fine enough for some electronic music, but anything that requires more subtle details wound up sounding downright bad.

With the biggest earbud tips I was at least able to get really good sound isolation, and I was initially relieved to find that there is also an audio-passthrough mode. But the quality of that passthrough mode is atrocious; not only is the outside audio noticeably delayed, it’s often degraded to the point of being unrecognizable. I tried to use this feature while running with the earbuds but wound up shutting it off because of how distractingly bad it was.

This is probably thanks, in part, to the Liberty+ earbuds having a mediocre microphone. My mom described me as sounding like I was “in a bathtub” on one call, and words and phrases were dropped or misinterpreted when I used the earbuds with Siri in anything other than a quiet room.

Maybe the worst part of my experience with the Liberty+ earbuds, though, is the buttons. Like the sound, the buttons are also really mushy. There’s one on each earbud, and each one takes up a decent amount of space — they’re easy enough to find — but there is so little physical feedback with these buttons that I spent the first week or so thinking they were touch-sensitive pads. I spent multiple days tapping to turn the earbuds on, or play and pause music, wondering why my attempts registered half the time, all before realizing that they were physical buttons.

At $150, the Zolo Liberty+ are a shade cheaper than Apple’s AirPods, and a good deal less expensive than options from Samsung or Bose. But while Anker eliminated some problems with these earbuds, like connection dropouts and video delay, they’re not as fully featured as some of those other offerings. Anker’s got a product worth iterating on here, but the search for the truly wireless earbuds that do it all soldiers on.

Our review of Anker Zolo Liberty+ 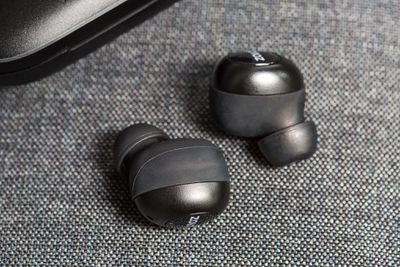