How much do you value peace of mind? Chances are, you already pay for a variety of insurance policies, some obligatory, some optional, that you rarely make claims against but nevertheless work to reduce anxieties related to your health and property. But what about your electronics? How long can you survive without power?

Big-ass batteries capable of both DC and AC output are the insurance policies we buy to avoid the horror of dead personal electronics. It’s not often we need to make use of all those watt-hours, but when the power goes out by either incident or destination, a giant battery is suddenly the most useful gadget you can own. 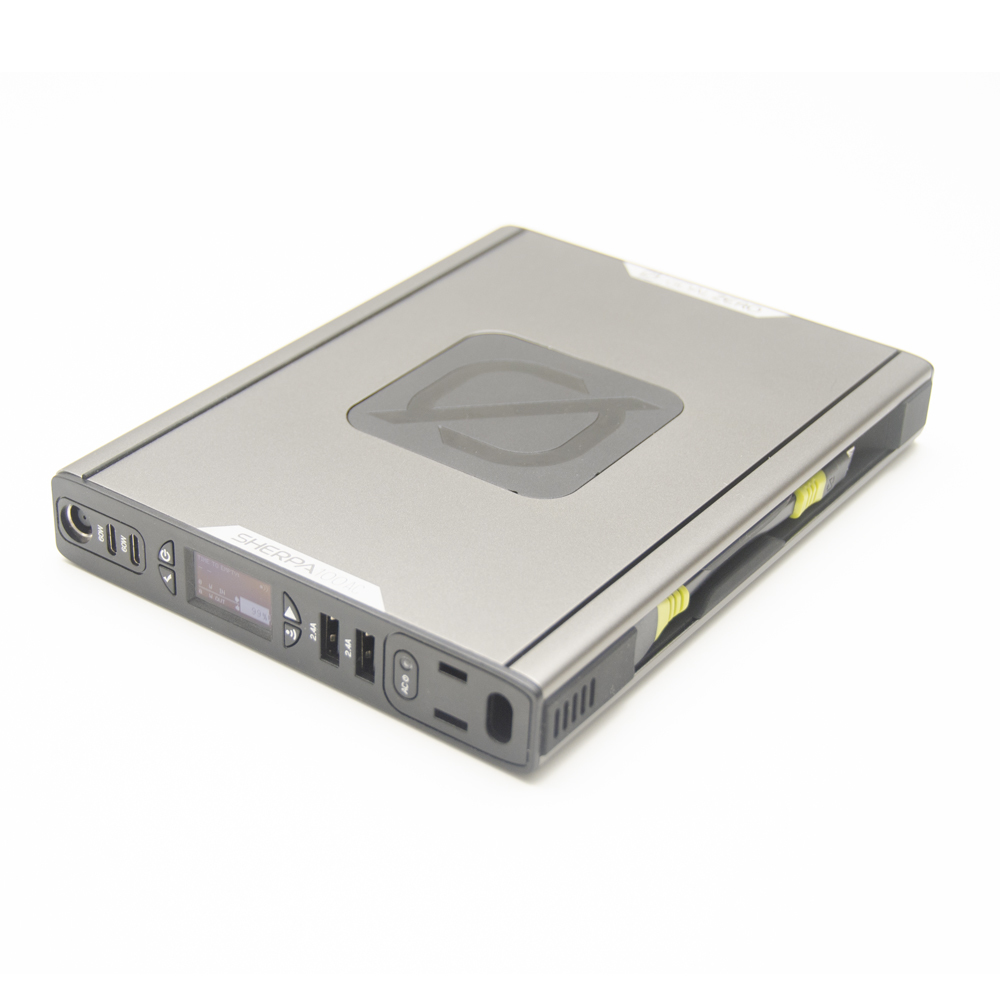 I recently tested a new version of the Sherpa 100AC Power Pack from Goal Zero while camping (mostly) off-grid in the Scottish Highlands. Mind you, even though my family was living in a classic VW camper van, we’re not a bunch of dirty disconnected hippies. Our camping experience was augmented by two GoPros, two e-readers, an LED rope light, a Nikon DSLR, an iPad, a Bluetooth speaker, two smartwatches, one laptop, and four smartphones. Thoreau would not be pleased, but he never had an Instagram account... or teens.

The redesigned Sherpa 100AC has a capacity of 25,600mAh (94.7Wh) which is just barely on the approval side of the 100Wh FAA carry-on limit for batteries. That’s enough power to charge a smartphone about eight times, a tablet four times, or a laptop twice, according to Goal Zero. Sure, an even bigger battery, like the massive 412Wh EcoFlow River, 434Wh Anker Powerhouse, or 428Wh Goal Zero Yeti would have been ideal for a trip like this, but you can’t take those monstrosities on an airplane.

The best battery packs for carrying everywhere and charging everything

A tiny OLED screen on the front displays the power usage and battery level on individual ports. It’s flanked by a quartet of buttons that make up the navigation controls. The user interface is rudimentary — designed, it seems, by an electrician. But hey, it gets the job done as it’s rarely needed for anything more than displaying status.

The battery can be recharged in about three hours using a wall charger. Sadly, that’s an optional purchase. Fortunately, the Sherpa 100AC can also be charged from either of the USB-C jacks since they’re bidirectional USB-C Power Delivery ports. That means I was able to charge it using the same 30W Apple charger and cable I brought along for my MacBook. That’s a nice space (and weight) saving option when traveling, as I only had to carry one brick. Goal Zero says a 2.4A charger will fully charge the Sherpa battery in about nine hours, whereas a 60W USB-C PD charger will charge it much faster, in as little as two and a half hours. The company also sells optional solar and 12V charging solutions.

I should note that because of the bidirectional nature of the Sherpa’s USB-C PD ports, they occasionally, though rarely, got confused when I ran a USB-C to USB-C cable to my MacBook. A few times, the Sherpa unexpectedly started charging off the MacBook’s battery. Reconnecting the cable always reversed this oddity in my testing. If the default auto-sensing behavior bothers you, Goal Zero does let you independently set the default charging direction on the two USB-C ports.

For two weeks, the Sherpa 100AC allowed me to venture off the grid for a few days at a time before retreating to caravan sites to plug in and recharge. The 94.7Wh capacity (augmented by the VW’s single 12V USB adapter that charged my phone while driving) was enough to power my family’s electronics even as we traveled more deeply into the countryside. Best of all, nobody had to stress that we’d be without power.

For kicks, I did try to charge an electric bike with the battery. After plugging in to the AC socket, the Sherpa thought about it, but then flashed a message saying it had exceeded the 100W max output power limit and needed to be reset. That was expected since the bike charger draws a bit more than 150W of power. Plugging a 10W Nikon battery charger into the AC port worked just fine, as did the MacBook charger.

At a suggested retail price of $299.99, the new Sherpa 100AC isn’t cheap. Ravpower sells a battery of the same 100Wh capacity, but with fewer features for $129.99, and EcoFlow will soon ship a comparable product for $199 that can be doubled to 200Wh with an expansion module for less than $300, all in. So, just like any other insurance policy, it behooves you to shop around.

The new Sherpa 100AC begins shipping in September to the US and then internationally with 220V support in November for €299.99.