'House of Cards' review: 'You've got to get a grip on who your masters are'

'House of Cards' review: 'You've got to get a grip on who your masters are'

Spoiler alert: to the best of my knowledge, this review contains no spoilers of House of Cards with regard to its plot. It focuses on the mood, style, characters, and language of the show, and to that end quotes much of its best dialogue. This should bother those who fear plot spoilers more, but I suspect it doesn't. If you are bothered by this, go watch the first hour — it's free — and then come back.

I attended an advance screening of the first two episodes of House of Cards in New York City that concluded just a few hours before the full series became available for screening on Netflix. Writer and showrunner Beau Willimon and actress Kate Mara, who plays ingenue journalist Zoe Barnes, each said a few words but took no questions. It was Netflix's last advance screening after several all over the world, and everyone involved seemed proud but exhausted. Finally, they could just let people watch the damn show.

So I watched it — episodes 1 and 2, with a brief pause for a black screen between them, and credits only at the end. And afterwards, I couldn't help feeling I'd seen something remarkable — that it was among the best television I'd seen in years, but also that it really was (as one Netflix staffer at the screening remarked to a friend over drinks) more like a thirteen-part movie than episodic TV.

The last scene of the first episode is precisely continuous with the first scene — very nearly the first shot — of the second. If Arrested Development's new episodes for Netflix are modular, capable of being seen in any order, House of Cards is the opposite. It is relentlessly linear. In the web browser, if you watch one episode, it automatically cues up and plays the next. What The Wire and other series were by creative accident, House of Cards is by intent: television made and designed to be consumed in great binges, where every part follows and depends immediately on what came before, with small pieces that are unclear until and unless you can survey the whole field and join them together. It left me feeling that, like The Wire, or The West Wing, or Rome or Deadwood, I would watch and rewatch this show, over weeks and months — and like HBO, I would want to see any original series that Netflix delivered next. 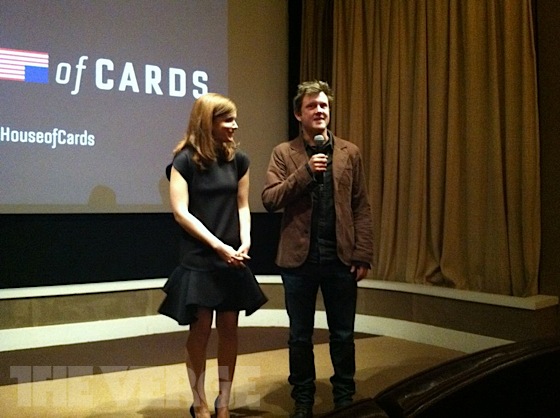 Kevin Spacey is unquestionably House of Cards' biggest star, and you don't get Kevin Spacey to anchor your drama unless you want to watch him talk. In House of Cards, Spacey's Francis "Frank" Underwood is both the male lead and the series' narrator, peppering the action with soliloquies delivered directly to the camera. If you've ever seen the original BBC House of Cards Trilogy (also, conveniently, on Netflix) or Ian McKellen's performance in his film version of Richard III, you'll recognize the conceit.

"my job is to clear the pipes and keep the sludge moving."

Here as there, the effect of the asides is both intimate and elevated, even Shakespearean, and Spacey strikes just the right balance between explosiveness and restraint. Underwood is a congressman from South Carolina, and Spacey channels quite a bit of Jim Williams, the charming Savannah businessman and murderer he played in Clint Eastwood's Midnight in the Garden of Good and Evil. But if in that film, you wondered whether his character really was capable of dark deeds, in House of Cards, you have no doubt. As the House majority whip, he says, "my job is to clear the pipes and keep the sludge moving." Frank exudes capability; he embodies it. You then peer through the subtle cracks in that otherwise flawless façade to see a man who turns out to have deep principles and deeper, very human passions. 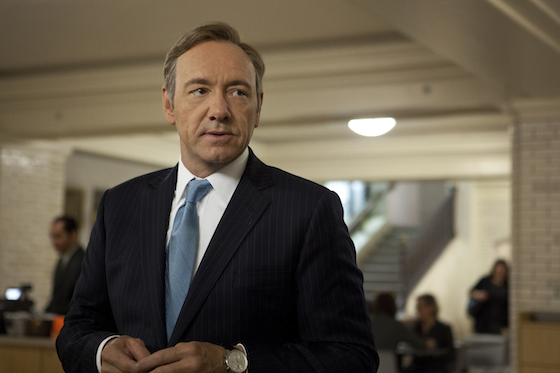 "Words matter very much, Ms. Barnes. You should care more about them, given your profession."

Spacey lives in language through his dialogue, too. "Words matter very much, Ms. Barnes," he tells Mara's character when they first meet. "You should care more about them, given your profession." Many of these characters, politicians and journalists, speak in quotable epigraphs and ready-made formulae. Like in Deadwood, the words are a blend of vernaculars and registers, but sculpted and shaped to become solid. Every declaration, whether true or false, is a game piece, a provisional stance, to hold or lose, or to play someone else out of position.

Besides the interplay between Spacey and Mara, many of the best moments are between Spacey's Francis and Robin Wright's Claire, his wife. This includes both pointed, hyperintelligent exchanges, and long stretches of silence, where little happens. These points of space are reminiscent of art cinema, but the art cinema of small, familiar, domestic moments, like those in director Vittorio De Sica's films. "I love that woman — I love her more than sharks love blood," Francis tells us, and we believe him. 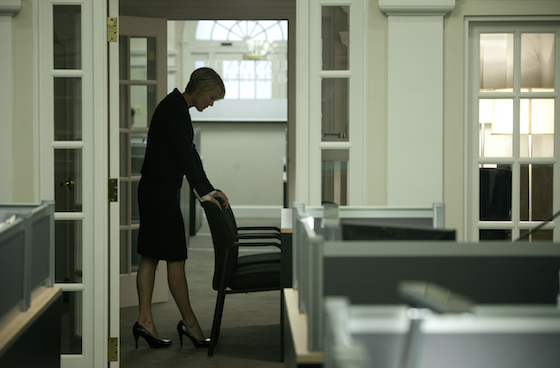 Wright doesn't get monologues like Spacey. Instead, the two characters speak to each other in competing soliloquies, usually staring straight ahead or off into space. When she asks him, "when have we ever avoided each other?" I laughed out loud. Their entire relationship is predicated on mutual avoidance and ambition. It's Macbeth and Lady Macbeth, but here, it's not at all clear precisely what Lady Macbeth is up to. They're students of humanity and mysteries to each other. I honestly still can't tell whether Wright's opacity is acting brilliance or failure. You find yourself desperate for a genuine moment of interiority. Wright's Claire is, as Rome's Posca says of Caesar's wife, "a species of statue," but one who understands the wheels of power and turns them herself. Her inscrutability is part of the series' broader veil.

In fact, one of the major changes — and I would say, advances — of Netflix's House of Cards over the BBC's version is the expansion of the show's secondary characters, particularly its women. Wright's and Mara's English counterparts really are secondary, and they're not at all so here. This is Washington, D.C. in 2013, not London in 1990, with Margaret Thatcher relegated to a photograph. Women hold power and struggle for and against it, in asymmetrical conflict with men and other women. 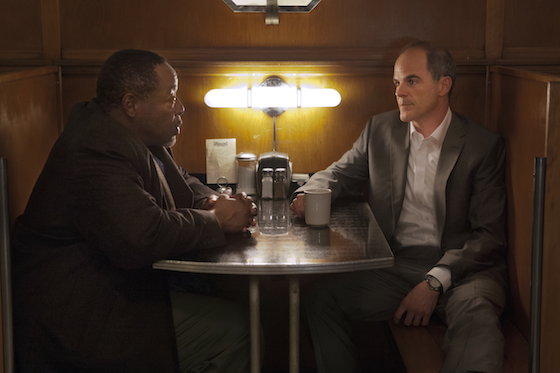 It's also a multiracial, multi-class, multi-generational Washington, with men and women and whites, blacks, and Latinos at every point along those axes. We see the government, law firms, and newspaper rooms, and we see the coffee shops, late night diners, and barbecue joints. It's a Washington built on the backs of the unwitting work of young people, and where older people are even more disposable.

Just by necessity, the adaptation of House of Cards to Washington in the 2010s has to be radical. Instead of an aristocratic Tory in post-Thatcher England, our Francis is a moderate southern Democrat with stately manners but hardscrabble roots. He listens to classical music and attends the symphony, but also devours racks of spare ribs and blows off steam playing first-person shooters rather than game hunting. (He does, however, reprise the BBC series' memorable formula, "you might very well think that, but I couldn't possibly comment.")

Instead of conservative pablum, official political speech is filled with liberal pablum. Instead of centering on the prime minister's office, the early focus is on the State Department, including an uncanny ripped-from-tomorrow's headlines moment involving a Senate confirmation, Palestine and Israel. Instead of the politically-inflected UK press, Zoe's Washington Herald is a newspaper struggling for objective copy about official Washington and struggling with the rapid-fire world of new media. The characters communicate in text messages, and we see what they read and write, displayed on the screen as pop-ups. It's a clever way to solve a small but thorny problem. A traditonalist female adversary calls Zoe a "Twitter twat" and seethes as the inexperienced younger woman is embraced by blogs and television. George Stephanopoulos, Donna Brazile, and other familiar DC faces appear as themselves. We see a presidential inauguration both from Frank's point of view and through CNN.

Like other elements of House of Cards, this may be a stylized take on reality, but it's another way the show feels utterly real and contemporary. Executive producer David Fincher directed the first two episodes, and for the most part this is the rounded, realist Fincher of Zodiac. Like The Social Network, it feels like a period piece about the present. We move between the halls of power and ramshackle row houses, office cubicles and messy apartments, dumpsters at midnight and inaugural balls.

"We are no longer bound by allegiances. We serve no one."

The connecting tissue between Washington's joints is made from power, language, and intrigue. When Frank plants a story with Zoe suggesting a cabinet appointment, he tells her to "say that name… say it over and over. Tomorrow afternoon, write it down, then watch that name come out the mouth of the President of the United States. This is where we get to create." And this is how Netflix is creating its new identity, by guile and fiat. "We are no longer bound by allegiances; we serve no one," Frank declares. It feels like a statement of purpose — for himself, the series, and its creators.

In the first episode, Frank meets with Zoe at a museum, across from an impressionist painting of two rowers. "We're in the same boat now," he tells her. "Take care not to tip it over. I can only save one of us from drowning." The second episode closes with Frank rowing, relentlessly, on an exercise machine Claire has put in their basement against his will. "Forward! is our battle cry," he says. "Ideology gets us nothing." With this bold bet on an expensive original series, released all at once, "forward" feels like Netflix's battle cry, too.