A photo history of Frog, the company that designed the original Mac

Share All sharing options for: A photo history of Frog, the company that designed the original Mac

It’s the 50th anniversary of the founding of Frog Design (or, as the company styles it, just “frog”). Founded in 1969 by Hartmut Esslinger in Germany, the company created some of the early designs for Sony, but its breakout moment came with Apple in the early ‘80s.

The request for proposal (RFP) from Apple simply read: “A six month investigation into a potential new product family and associated peripherals by selected ‘world class’ designers in conjunction with Apple staff designers.” It then listed codenames for different types of products, each named after one of the seven dwarfs from Snow White. Frog ultimately won the contract and worked with Apple to make the Snow White design, which debuted on the Apple IIc and continued on with the original Mac.

The RFP ended with an image of the Wicked Queen and the quote asking, “Who’s the fairest of them all?” That is a coy thing to put on a document kicking off a competition between design firms. And I guess it perhaps says something about how Apple and Steve Jobs saw themselves.

We swung by Frog’s San Francisco studio this week to take a look at a small exhibition it’s put together for San Francisco Design Week. In addition to some original wood prototypes for classic Apple devices, the company is also showing other designs it has worked on in its history — from the mundane to the very weird. The company is holding a reception tonight at its offices, but since it’s sold out, you can browse a virtual gallery via a website it created.

Here’s a sampling of what we saw in Frog’s offices. (Click to enlarge any photo.)

The original RFP to create the design language that would ultimately become Snow White, which was used on the original Macintosh. Frog Design won the proposal and helped Apple design product from 1983 to 1989. 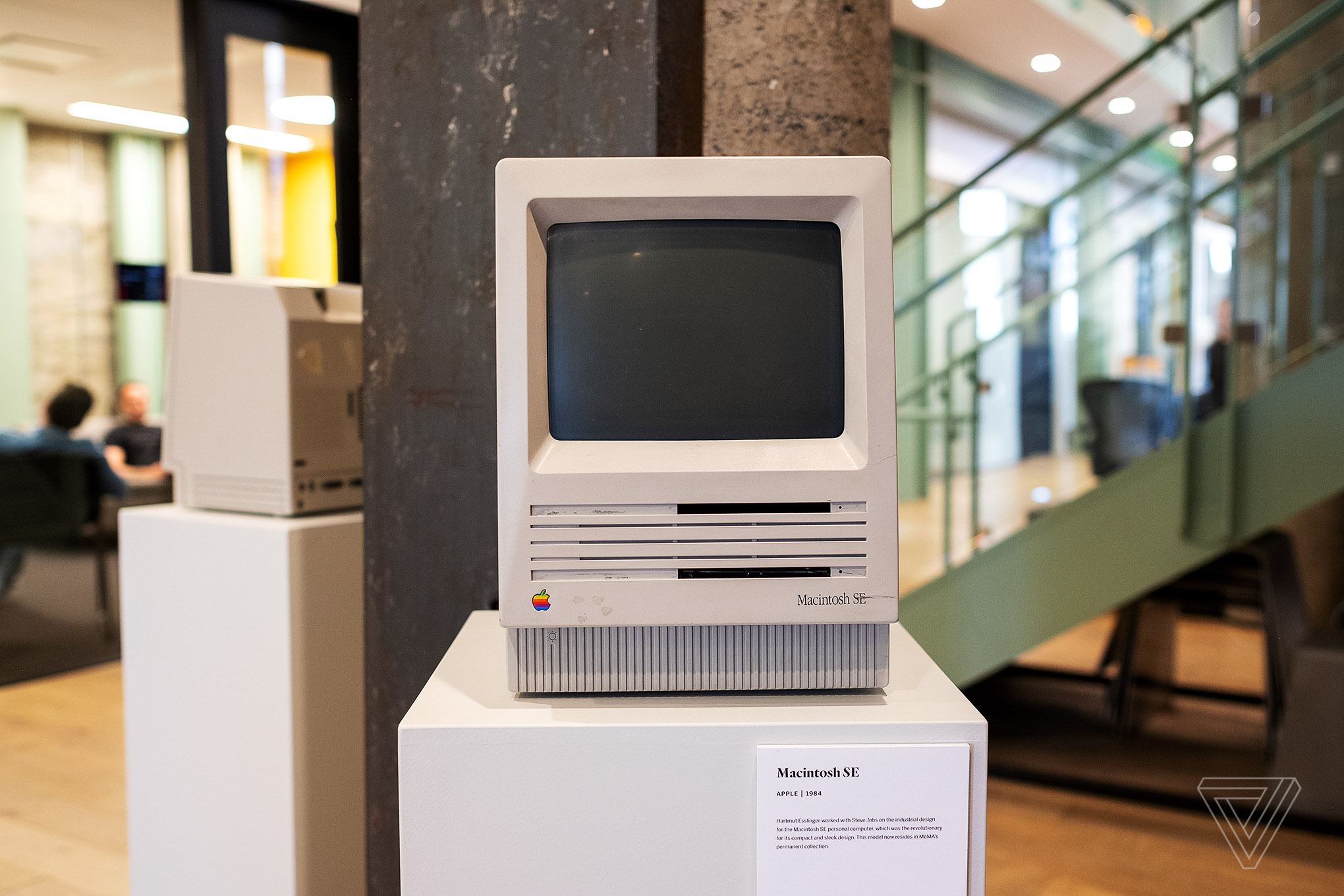 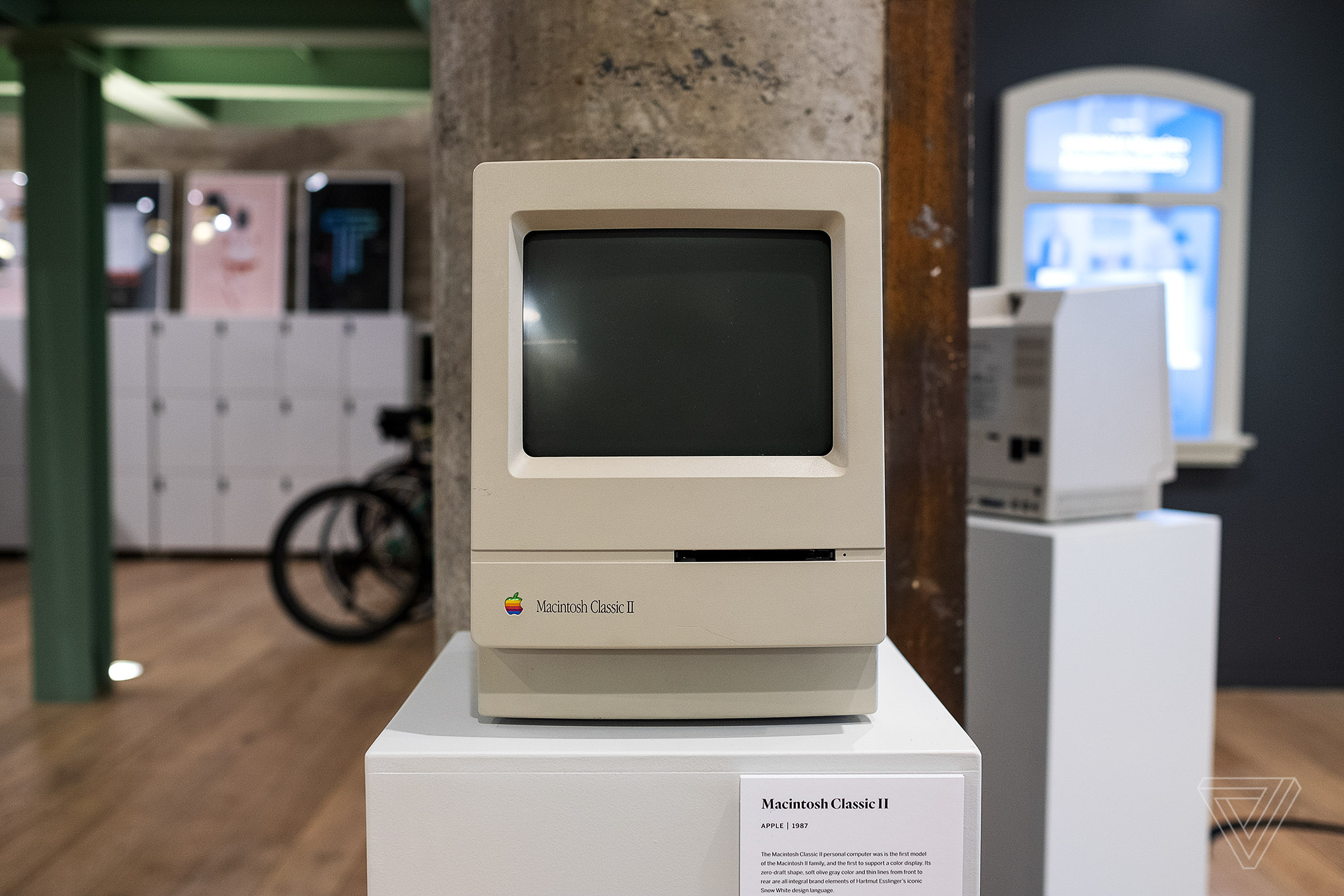 Macintosh SE (left, 1984), Macintosh Classic II (right, 1987). The horizontal lines on the SE were meant to evoke lines of computer code. They were phased out for the Classic II. These designs featured a “zero-draft enclosure,” which had tighter tolerances than other enclosures and were more difficult to manufacture — and, therefore, more difficult to copy.

A model for the Lisa prototype made out of wood and foam. It was designed to have a screen that was the same size as a sheet of paper for WYSIWYG work. The slot at the bottom was meant to house two floppy disk drives.

Snow White also included peripherals like monitors and printers. This monitor model from 1982 is made of wood and foam. It would eventually go on to sell alongside the Mac IIc. The “line” printer prototype is from the same year. Frog says that this wooden prototype was part of Esslinger’s original pitch to Steve Jobs, which won the RFP.

Jobs was famously ousted from Apple and formed NeXT computers. Frog was bought in to design the “smart-station” NeXt cube, targeting the education market.

Today, Frog does more than just design enclosures. It also does interactive software design and business consulting. Polk had Frog do a study on its product lines across three different brands to see how it could better take on Beats headphones (before it was purchased by Apple). Frog’s conclusion: most consumers care less about audio quality than they do about how their headphones look.

The IQ/MAX turret, a “multi-line, multi-speaker phone system” designed for IPC in 2010. It was meant as a tool for stock traders in the age just before computerized trading took over.

The Meta AR headset, 2015. Designed to take on the HoloLens, it differentiated itself with a wider field of view, but it needed to be tethered to a computer. Meta shut down in January 2019 and its assets were sold, but the company that purchased it remains coy about what it plans to do.

Frog also designed the Mobvoi TicWatch, though with Android Wear, there isn’t a lot of flexibility in what form factors are possible. Frog’s original design included a capacitive strip on the side in lieu of a rotating dial.

Frog’s San Francisco design studio and some of Frog’s logos over the years. Note the four-color logo in the middle, which Frog says predated Google’s multicolor logo. The two bear a striking resemblance to each other.

How the Microsoft Surface Pro 8 stacks up to the Surface Laptop Studio, Go 3, and more