How a second-screen app made 'The Walking Dead' come alive

Share All sharing options for: How a second-screen app made 'The Walking Dead' come alive

When I sat down this past Sunday for the mid-season premiere of The Walking Dead, I didn’t unplug like I normally would. Instead I kept an iPad at my side, and while Rick Grimes, his son Carl, and the sword-wielding Michonne battled their way through a zombie apocalypse, I took part in polls, reminisced about older episodes, and got a glimpse of what was yet to come. It was courtesy of AMC’s Story Sync, a custom app and web experience designed just for that network. While second-screen viewing can often feel like the great promise that’s never quite delivered, AMC is doing everything it can to buck the trend — and it feels like it’s succeeding.

One of the first to market when it debuted in 2012, Story Sync lets viewers watch an interactive presentation that plays in real time during the initial broadcast of a given episode. Originally tied to the second season of The Walking Dead, Story Sync continued to gain traction, and AMC expanded it to include Breaking Bad and The Killing in subsequent years.

"The usage has steadily grown — and sometimes more than steadily grown — each time we’ve done it," Mac McKean, AMC’s senior vice president of digital media, tells me, and it’s obvious the network believes in its potential. That’s clear to anyone that watched the final season of Breaking Bad, where Story Sync promotional spots were about as common as menacing images of Walter White. 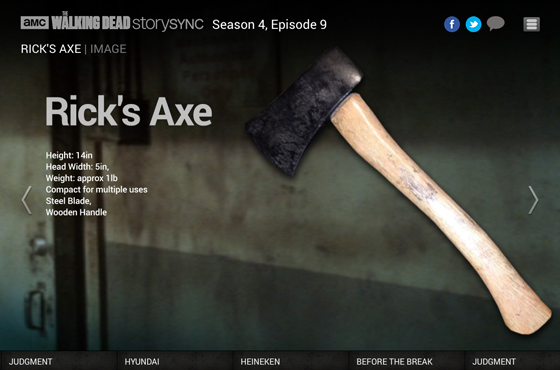 I’ve personally never been a fan of tweeting or posting to Facebook while watching movies and shows, but there’s a real sense of fun to Story Sync that played nicely with the Walking Dead premiere. I was able to successfully predict who would kill the most zombies, weigh in with other participants on Michonne’s mental state, and find out information about on-screen weapons (want to know the size of the axe that Rick’s holding? Story Sync has you covered).

Perfect for the obsessed fan

It’s definitely geared towards those that are already obsessed with their favorite shows, but it serves that audience well. Updating in real time, the polls give you a taste of what it would be like to watch the show in a room full of other fans, but Story Sync is smart in not throwing out too many interactive options. I’ve found that Microsoft’s SmartGlass and even Amazon’s X-Ray feature can lead to diving down rabbit holes of distraction, taking my focus away from the show, but Story Sync is more reserved. You never need to futz with your device unless you’re inspired to, with each interactive element sliding off the screen in lieu of the next moment. And more importantly, it doesn’t get in the way when heavier, more emotional scenes come to pass — and let’s face it, AMC’s not exactly known for its feel-good comedies.

Part of that execution may come down to AMC’s reliance on show creators. "They’re definitely involved, in greater or lesser degrees depending on the show and what we’re doing," McKean says. In the case of The Killing, staffers from the series wrote short films that were incorporated into Story Sync, but in all cases the creators are the ones that help direct what areas should be explored, and what should be left ignored. 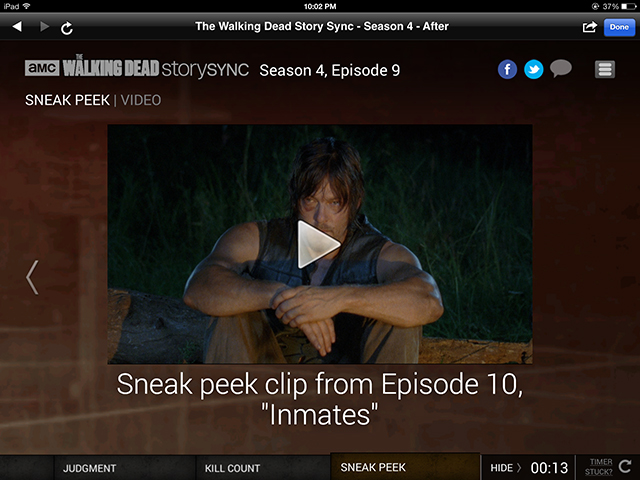 Of course, there are some very obvious commercial considerations in play. Story Sync has its own set of ads during commercial breaks — "it’s very popular with sponsors," McKean admits — and a web experience that’s tied to live broadcasts has the potential to pump up ratings as well. Built-in buttons for easy posting to social networks also helps incentivize social chatter, driving overall awareness of AMC programs. The network acknowledges that those benefits exist, but stresses that they only come into play if viewers are actually finding Story Sync useful in the first place. "We’re a business, so certainly we’re trying to drive our business," McKean tells me. "But hopefully we’re trying to drive our business by creating great experiences for the viewers and the fans."

"We’re trying to drive our business by creating great experiences for the viewers."

At the moment, AMC likes what it sees. While the network won’t divulge specific numbers, it says that the number of people using Story Sync during a given episode "favorably compares" to the amount of people that tweet about TV’s most popular shows. As a point of reference, Nielsen SocialGuide said that more than 526,000 unique individuals tweeted about The Walking Dead’s mid-season premiere, up from the 391,210 that tweeted during the December finale. Over the course of an entire season, McKean says the number of individuals that use Story Sync runs well north of 1 million.

The network hopes to leverage the tool next in its upcoming Revolutionary War thriller Turn, where Story Sync will be used to surface background and historical information, and McKean teases that some new features are on the drawing board that will allow Story Sync to provide personalized experiences to different users. "But we only win if the viewers are winning," McKean tells me. "We’re in the business of entertaining and engaging people." From the way Story Sync is progressing, AMC seems to be on the right track. Rick, Carl, and Michonne… well that’s another story.