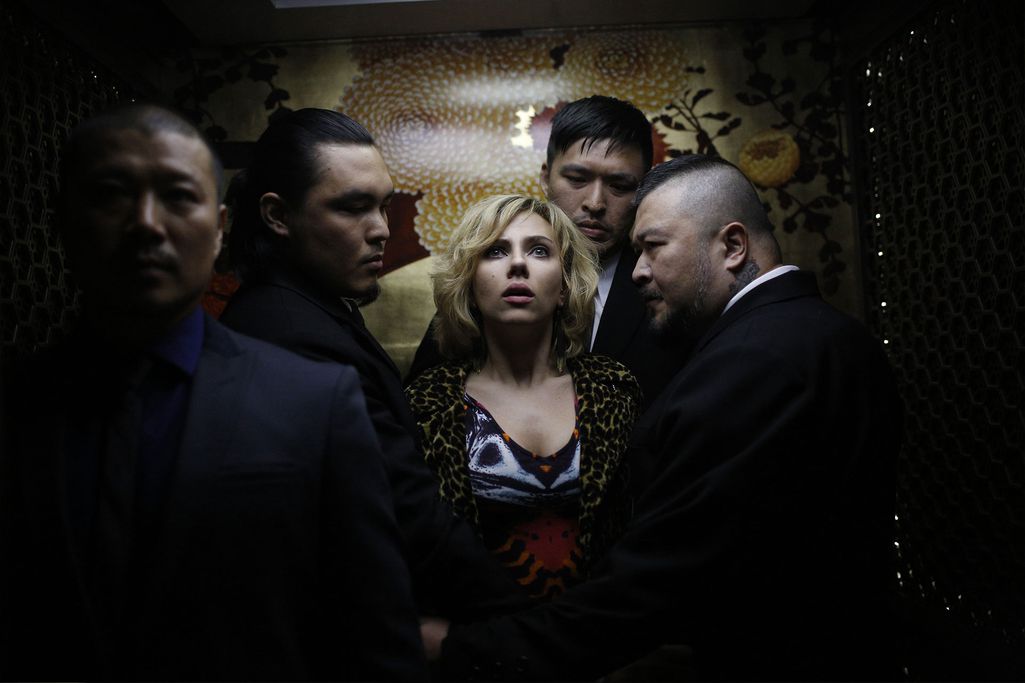 Given people’s desire to dump money on all sorts of self-improving pills, superfoods, fitness trackers, and life hacks, it’s no wonder that Hollywood has taken to neuroscience’s most persistent myth — the idea that humans only use one-fifth of their brains. Way back in 1996, John Travolta gained access to the rest of his and learned to levitate things in Phenomenon; a few years ago Limitless’ Bradley Cooper took a “smart pill” and used his new brain power to get super-rich playing the stock market. Now, with Lucy, France’s most blockbuster-ready director Luc Besson takes a stab at the 100 percent human.

Besson’s augmented main character, having tapped into her full potential, is oddly inhuman for someone who’s supposed to be her fullest possible self. The titular Lucy, as the film goes on, is able to do amazing things — levitate, for one. But in Besson’s world, using more of your brain makes you increasingly abstract, so the more amazing Lucy’s powers are the less she seems to enjoy them. In trying to reconcile this cool, mechanical version of the brainiest human, the movie grafts together elements of a madcap spy thriller and an oblique, existential riff reminiscent of Terrence Malick’s Tree of Life.

Scarlett Johanssen’s Lucy begins as a pretty, vacant undergraduate bar-hopping her way through a semester in Taipei. As the movie opens, we find her being pressured by a Bono-lookalike she’s been seeing into delivering a package. Obviously, the hand-off is not to go well for Lucy, and she’s shortly being dragged into a black marble hotel room, split open in the "lower tummy" region (the brisk black-market surgeon’s term, not mine), and packed with drugs she’s to deliver abroad.

The drug almost immediately becomes dislodged and leaks into Lucy’s bloodstream, inexplicably turning her brain function up to 11. With access to ever-larger portions of her brain, Lucy can shoot a gun and learn languages instantly. She can read minds and see radio waves, levitate enemies, turn from blonde to brunette, type on two keyboards at once and make computers do things that, no matter your brain capacity, computers will never, ever do. As the movie progresses, a number flashes across the screen every time Lucy gains access to a larger percentage of her brain, basically leveling her up in the big video game of life. And for all of the interest Super Lucy shows in being able to do any of these things, she actually might as well be controlled by a joystick.

She can make computers do things that computers will never, ever do

Besson’s most popular work has almost always featured some form of a femme fatale — the violent, cunning female lead striking a sultry stance before she pulls the trigger and blows your brains out. In Besson’s breakout The Fifth Element, Milla Jovovich’s flame-haired humanoid runs circles around Bruce Willis with a giggle; Nikita’s thoroughly 1990s version of the cliché has Anne Parillaud mowing down diplomats in a pixie cut. Lucy is built for that mold — she is, quite literally, the only woman in the film, surrounded constantly by goonish and interchangeable groups of cops, scientists, and gangsters (the notable standout being Min-sik Choi, the slickest of mob bosses) all of them immediately bested by her otherworldly smarts and the click of her heels on the sidewalk.

But for some reason, Besson’s version of hyperintelligence lifts its subjects above the basics of the human experience, and by the time she’s at 40 percent Lucy’s emotional capacity is on par with Robbie the Robot. "I don’t feel pain, desire," she tells Morgan Freeman, who plays a brain researcher softy befuddled by her predicament.

But without pain and desire, charm or glory, Lucy makes for a deeply uninteresting lead. When Scarlett Johanssen played an AI she was more human, and if Lucy can’t eke joy out of her superhuman powers, it’s almost impossible for her viewers to. It’s a fact made even more frustrating given Johanssen’s pre-super-drug performance, a genuinely claustrophobic 10 minutes in which the actress’ body seems to physically shrink as she realizes what’s in store for her.

It’s too bad, because the fights are well-choreographed if anticlimactic, and the locations — Berlin and Paris among them — are lovely. At times, the editing can be whiplash-tight, particularly during one extended, clairvoyance-enhanced car chase, and the spare moments of deadpan humor are welcome respites from a film that tries to drop expository knowledge about the meaning of life with a straight face.

When Johanssen played an AI she was more human

Throughout the film, the action is interrupted by long, sweeping shots straight from the Discovery Channel: gazelles, pyramids, tornadoes, dolphins. It invites comparison to Terrence Malick’s Tree of Life, famously interspersed with longer shots of similar material. But where Malick’s intentions are usually fairly straightforward— dude loves the divine beauty of nature, okay? — importing that level of heavy-handed montaging onto a sci-fi film requires you to get your scientific theories straight, or at least have a great character as a foil. Unfortunately, the script is a weird tangle of evolutionary psychology and bootleg transhumanism, falling back on booming pseudo-profundities like "humans are more concerned with having than being" and "we never really die."

Towards the end, Lucy takes a sharp left turn and, unable to make good on earlier foreshadowing, breaks down into a tumble of trippy, jarring — and, yes, sort of beautiful —scenes. It’s heavy and more than a little ridiculous, but at least it’s honest, and better than watching one of the most in-demand actresses on the planet boredly flip dudes upside down, or gaze impassively on as she experiences what should be the Best Trip of All Time. As Lucy herself says, in a flat voice, "Knowledge doesn’t bring chaos — ignorance does." An ignorance-free, chaos-less, post-human world sounds great and all, but unfortunately it doesn’t make a very satisfying action movie.