As rumored, you'll be able to get your hands on that Zelda-themed 3DS bundle in time to play under the dinner table come Thanksgiving. The pack contains a limited edition black console with gold trim and Zelda motifs, together with a copy of The Legend of Zelda: Ocarina of Time. Nintendo also confirmed a Super Mario 3D Land bundle, which ships with a standard red console and a copy of the game. Both packs will be available for $199.99 on November 24th, or $179.99 via a Black Friday deal at Best Buy.

The Zelda bundle comes as part of Nintendo's 25th anniversary celebrations for the series. The latest entry, The Legend of Zelda: Skyward Sword, was released in the U.S. on Sunday and comes with a bundle of its own. Skyward Sword requires the use of Nintendo's Wii MotionPlus attachment for extra sword-fighting precision, and those who haven't yet picked up the accessory can buy the game together with a special gold Wii Remote that has MotionPlus built-in. If you don't need the extra controller, though, all copies of the game in the first shipment will contain a music CD featuring orchestral renditions of pieces from the series' history. The game and CD will go for $49.99, and the game, CD and controller bundle will be priced at $69.99. 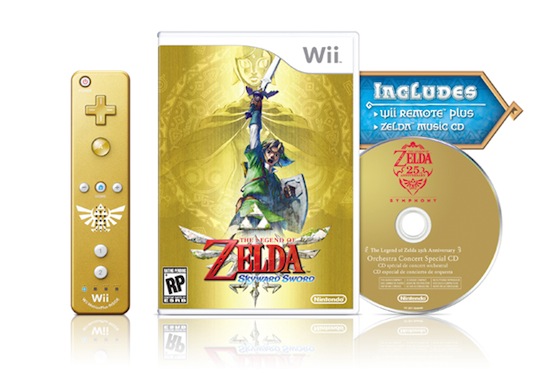