Bioware has Mass Effect 3 action figures available for pre-order. Each one has a DLC code that could unlock new weapons or characters, character boosters, or weapon upgrades.

Share All sharing options for: 'Mass Effect 3' action figures include DLC for multiplayer on Xbox and PC

If you want to get that extra edge in Mass Effect 3's multiplayer mode, one way to do it is to hone your skills. Or you can just buy some action figures from Bioware. Each one will come with a code for downloadable content that could include new weapons and characters, character boosters, or weapon modifications and upgrades — what you end up with is slightly randomized during registration. Unfortunately for PS3 owners, the bonuses are limited to Xbox 360 and PC multiplayer mode.

Bioware says the dolls come with updated Mass Effect 3 branded packaging, implying these are the same as the Mass Effect 2 action figures. The roughly 7-inch characters will ship in April or May of 2012 and run $20 a piece, or $75 for a set of four. Mass Effect 3 doesn't come out until March 6, but the demo will be aptly timed to February 14th. 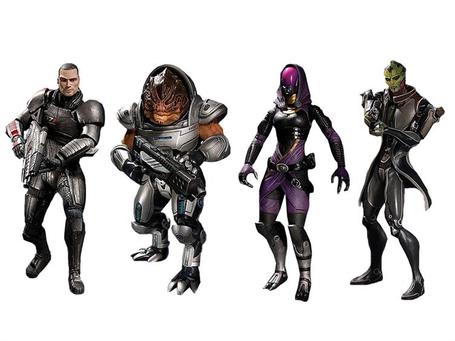