How Penny Arcade wants to reinvent patronage with Kickstarter

As a participatory platform, Kickstarter has frequently overpromised and underdelivered. Could a webcomic turning over its funding and direction to its readers turn that around?

Share All sharing options for: How Penny Arcade wants to reinvent patronage with Kickstarter

In 2001, Penny Arcade, a two-year-old, two-man gaming-themed webcomic penned by Jerry Holkins (aka Tycho Brahe) and illustrated by Mike Krahulik (aka John "Gabe" Gabriel) was in trouble. Affiliate ad network and dot-com bust poster child eFront had collapsed, leaving Penny Arcade in control of their art but out of cash or ways to get it. "The word crowdfunding hadn't been invented yet," writes Krahulik; "back then, people simply called it 'begging'."

So for more than a year, Holkins tells The Verge, that's what the two cartoonists did:

"back then, people simply called it 'begging'"

It started as a pure donation model when we had no money and nothing coming in, but ultimately we went to something like an (ahem) "premium" model, where we would make extra comics and projects specifically for those who donated, while running what we felt was a tasteful level of advertising — no animation, no audio, and only two advertisers a month. That made sure we had rent and groceries, at least, as a kind of ground floor. But that was a long, long time ago.

Ten years later, the site makes enough money from ads and other revenue to keep a staff of fourteen in more than just groceries. But as they explain in this video, both Holkins and Krahulik remember that uncertain time as the golden age of Penny Arcade: no ads, a direct relationship with their audience, necessity forcing them to think on their feet. And so, they're going back to their readers, some of whom were there to pledge money all those years ago, with the help of Kickstarter, to try to capture both the purity of that moment and a little of its magic again.

Still, Penny Arcade's Kickstarter project is a little unusual — and not just because the rewards include things like "Gabe will think about you during sex" and "Gabe will shout out your name as he chases a duck" (preferably, not both at the same time). In fact, by raising a million dollar fund to support the bulk of their company's operations for an entire year, the Penny Arcade gang may be stretching the limits of what Kickstarter was built to do.

Ouya's $99 video game console is a much more typical million dollar Kickstarter project, if such things can be said to exist. Ouya is a new company with some name cachet and a slick consumer tech prototype that you can pre-order with a basic pledge, with some personalized goodies for a little more money. There's an element of consumer faith that the project will deliver on its promises, but also a soupçon of ideological patronage in supporting the principle of open-source development for console games.

"That's why we're doing it, to find out"

Like games, comics are ridiculously popular projects to fund on Kickstarter. There's a whole category devoted to them. Just this spring, webcomic The Order of the Stick raised well over a million dollars to put old and new collections into print.

Still, within this frame of expectations, Penny Arcade is weird. The primary product, the webcomic, already exists. What's already there may not even change very much. "I don't know the extent to which it is possible [to fund the site this way], let alone desirable for readers!" says Holkins. "That's why we're doing it, to find out. It's entirely possible that how the site is funded isn't important to them, and things will stay exactly as they are."

The big changes aren't really in new products, but in the site's process and reader's engagement with it. The site's ads get progressively more limited as fans collectively kick in more money, from $250,000 to eliminate the site's leaderboards all the way to $1,000,000 to completely trash ads on the web site.

Most of the "stretchgoals" are still secret. The bigger changes and most tantalizing goodies can't even be contained within Kickstarter's formal constraints. Off-book rewards like personalized paintings, comic strips, and tours are only available beyond Kickstarter's $10,000 individual contribution limit. ($100,000 gets you featured in a strip that you help create with the two cartoonists, if you're wondering.)

Among other things, scrapping ads means that staff who now mostly work on soliciting advertising will spend much more of their time working directly to make art for the site — "a shocking reconfiguration of the company," said Krahulik, and not one that many other media organizations could easily copy.

Other possible changes, from exhibiting cartoons under a Creative Commons license or rejiggering RSS feeds to let readers read full comics off-site, all add value for readers, but in a qualitative way. At the same time, it all follows like a "chain reaction" from the decision to jettison ads:

Without the almighty "pageview" to consider, why not populate the RSS with full comics and posts? Why not enable and even encourage apps, first and third party, for people to read it however they damn well please?

Some of the "premium" advertising-driven content, like the popular comics showcasing particular games under the header "Penny Arcade Presents," will just disappear. "We're under contract to do more Acquisitions Incorporated [a D&D-themed series], so that would have to be grandfathered in," Holkins says, "but the comics and other creative services work, no. All that time will plowed into multi-page special projects for readers instead, which is reflected in the special projects we've got lined up for Stretch rewards."

Many of those stretch rewards slots are still undefined. With all that value added and energy being re-directed, Penny Arcade readers will undoubtedly end up with some new goodies that they wouldn't have gained otherwise. But they will also get the chance to participate more fully in the reformation and creation of the company.

From patrons to producers

This is an area where Kickstarter, as a participatory platform, has frequently overpromised and underdelivered. By making most of the benefits qualitative rather than quantitative and leaving some of the goals undefined, Penny Arcade is leaving more room for reader inclusion than most other projects.

Holkins and Krahulik say they have a very definite plan for the Kickstarter 'stretch goals' that are currently undefined, but want to leave themselves wiggle room to experiment. "We have every intention of throwing away our own dumb ideas and using [our readers'] smart ones at the first possible opportunity," Holkins says. "I fully expect to dump some of this stuff in the trash and replace it with awesome 'crowdsourced' items instead."

At its limit, this is a new model of what Kickstarter and other "fan funding" platforms might be. Andy Baio, Kickstarter's original CTO, has characterized this as a shift from a "patronage" system to a "producer" system, on the model of a record or movie producer:

As Kickstarter's exploded in popularity, I've started to see signs that there are others like me — a movement of fans as producers, commissioning work from their favorite artists instead of waiting for the artists to come to them.

To me, it feels like the next logical step in the evolution of fan funding. Already, fans are expecting to witness the creative process with behind-the-scenes progress updates and feedback forums. Now, they may actually help decide what gets made. If I'm right, the implications for working artists is potentially huge, providing an unexpected source of revenue, as well as potential creative headaches.

After all, if fans replace advertisers, shouldn't fans have at least as much input into the content as advertisers do in most publications today?

"The fact of the matter is that the existing model we have now is a 'patronage' model," Holkins says:

We have Patrons [advertisers] and in exchange for their Patronage we grant them consideration on the site. To my mind, and I recognize that this has a philosophical aspect to it, it matters a great deal who the Patron is. Where I'd love to be on your map is making comics! The model is up to the readership at this point. 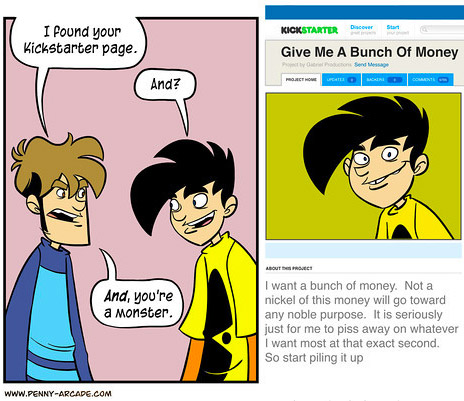 In the past, Penny Arcade's been skeptical about the value of Kickstarter. It's posted comics with titles like "Kickstopper" and "Dickstarter." Just this morning, Penny Arcade game reporter Ben Kuchera panned the hype surrounding Ouya, tweeting that "I've read the Kickstarter page over and over, and I don't see anything real being offered. I feel like I'm losing my mind here." Will skeptical fans say the same thing about Penny Arcade's own project?

"Kickstarter's main advantage is that everyone knows about it," says Holkins. "It's also easy to use, and is purpose-built. But it's not a mystical wealth conduit, and you still need to have an offer that people want to be a part of… On the whole, I think the advantages outweigh any disadvantages."

The future: bigger than ads or no ads

The primary outstanding question remains whether even with these premium buys, Penny Arcade can raise money from its fan base comparable to what it can now from advertisers. "Advertisers are usually willing to pay much more than online audiences would be willing and able to pay themselves, and that's why advertising is by far the most common method to fund media," observes Instapaper's Marco Arment. "Penny Arcade is challenging their audience to make them a counterexample."

But believe it or not, this could also be bigger than advertising alone. My friend Robin Sloan funded his first novella through Kickstarter back in 2009. "We haven't yet begun to understand what's possible here," writes Robin in an email. "All this stuff — completely alternative funding channels for content sites, fan-directed commissioned work, crowdsourced creative VC funds! — is way more radical and frankly more interesting than the standard Kickstarter model of 'help me finish my movie' or 'help me print my book.'

"Maybe none of it quite works yet," adds Robin, "but maybe we might be just at the cusp."