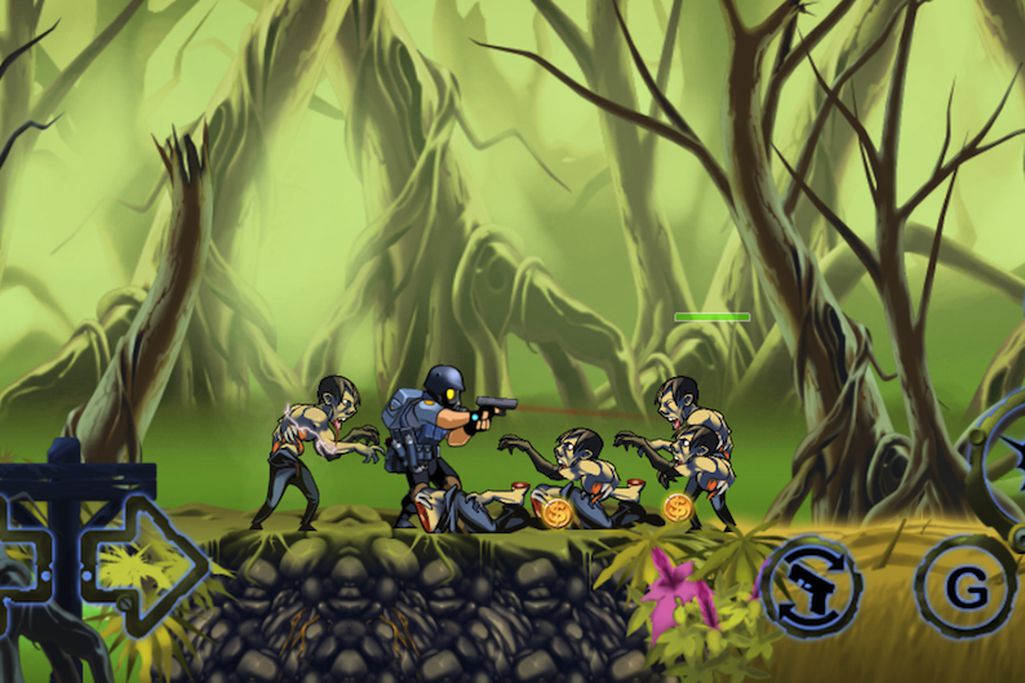 Apocalypse Max is at first blush another lifeless member in the crowd of zombie games on iOS. Once again, a one man army is set to save or survive a world overrun with undead. In the first stage, the guns (from pistol to grenade launcher) and the zombies (some trudge, some run, others toss knives) are all too familiar. What distinguishes Apocalypse Max is a degree of polish uncommon on the iOS App Store.

The platforming controls work, practically a miracle on a touch screen. You move Max left and right by pressing arrows on the left side of the screen. You switch weapons, toss grenades, and jump with virtual buttons on the right. And you use a lethal dagger slice by swiping a finger in the direction of an enemy. The jumping, running, and killing are nearly as precise as they'd be on a traditional controller.

Everything else — aiming at zombies, reloading weapons, and using health packs — is taken care of by the game's artificial intelligence, allowing the player to focus on navigating from one end of a stage to the other, slaughtering everything that gets in his way. 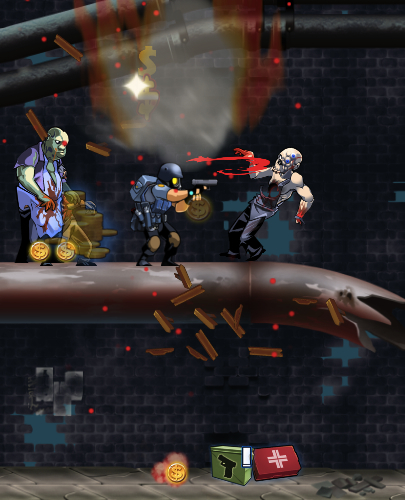 The adventure divided into environments like a muddy swamp and a winding sewer, each containing a set of four levels. In the swamp, Max must leap over toxic water and pits of quicksand that will gradually tug him down to his grave. The sewer has low ceilings and serpentine paths, making jumping past enemies tough and forcing close-range combat.

Because of the variety of level layouts, players benefit from using the right weapon for a particular scenario.

You acquire these weapons between rounds in the store using an in-game currency, which can either be earned or bought via in-app purchases. There are pistols, shotguns, machine guns, grenade launchers, and plasma rifles, all of which can be upgraded. When playing, I'd often forget about the artillery store and find myself slicing through levels with the knife, ignoring the feeble pistol. Having high end weapons placed in the earlier levels would have motivated me to pay more attention to what's available in the store.

The art design is a step above the competition, calling to mind the Shank series on consoles, while the sound is a throwback to the Vincent Price Saturday night horror flicks of 50s. No one aspect of the game feels like a weak link.

As Apocalypse Max progresses, the zombies begin to come in bizarre shapes and sizes like zombie fish, zombie vultures, and zombie headcrabs. For a fast-paced run-and-gun shooter, Apocalypse Max is slow to reveal its best ideas.

With the zombie shooter, Wandake Game Studios reminds us why we love killing the undead, by doing what everyone else has done. Just better.

Reviewed on an iPad. A note on Polygon's mobile reviews can be found here.