Slowly but surely, creating virtual items for games is becoming a valid career. Today, a chart posted at Valve's Steam Dev Days developer event shows that the players who created items for popular games Team Fortress 2 and DOTA 2 made $15,000 on average in 2013. Valve paid out over $10,000,000 for the digital goods last year to a community of only 661 creators, generating sizable sums for many of them. It's no secret that TF2 hats are big business, with Valve's Gabe Newell telling us that some Steam Workshop creators can make $500,000 a year, but we had no idea how few people were chasing that money as of 2013. 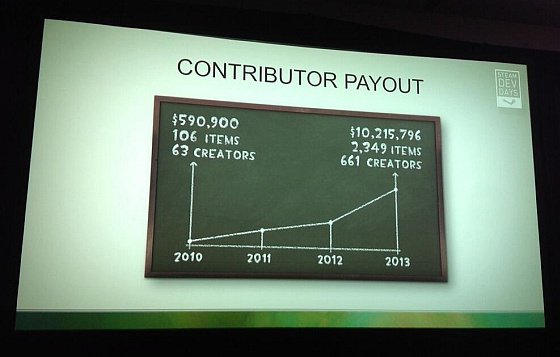 With Valve sponsoring major user-generated content initiatives like Team Fortress 2's Robotic Boogaloo, it's possible that only elite creators are making real money from the program, but Valve's Robin Walker didn't think so as of last January. "We're pretty happy with how there's a bunch of people making a good living off it. Compared to the monetary distribution of other places, like mobile applications, the workshop appears to be much less winner-take-all," he told PC Gamer.

At Steam Dev Days, Valve said that 90 percent of the items in Team Fortress 2 today came from the community. 17 million user accounts currently own a total of 500 million items in the game.