Nvidia wants to let you play games with your laptop unplugged

Nvidia wants to let you play games with your laptop unplugged

Last year, Intel's new Haswell processors finally brought solid battery life to ultrathin laptops — easily over seven hours on a charge. But as ever, portable gaming machines like the Alienware 14 barely lasted an hour of game time without a nearby outlet. Now, Nvidia believes it can let you actually game on the go: the company claims its latest GeForce graphics chips can offer up to double the battery life with a technique called Battery Boost.

"Imagine a car where you've duct-taped the accelerator to the floor. That's what notebooks are doing today," says an Nvidia product manager. But with the new GeForce GTX 800M series GPUs the company's announcing today, Nvidia can automatically throttle your laptop's CPU, GPU, and memory to save power, and have them render fewer frames every second. 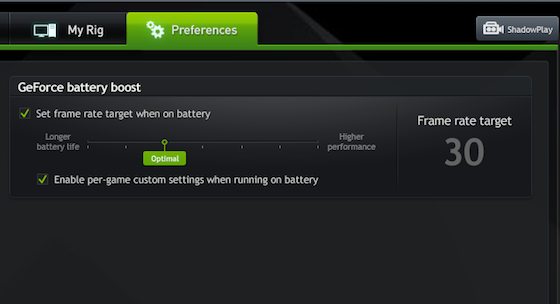 Say a demanding game runs smoothly at 50 frames per second. Launch the game again after you unplug your machine, and Nvidia's driver will automatically run it at 30FPS instead, giving you the difference in battery life. For more demanding games like Crysis 3, you might not see as much of a difference, but the inverse is also true. If you're rendering older games at 120FPS — likely way higher than your laptop's screen is even capable of displaying — you can definitely afford to take your foot off the gas pedal.

We haven't been able to test Battery Boost yet to make sure it doesn't have any adverse effects like tearing or stuttering, but Nvidia says it should work automatically without issue as long as you plug or unplug your laptop before launching a game, and that you'll be able to set the frame rate target to whatever you like on a per-game basis if 30FPS doesn't suit your needs. Nvidia also says it's been working with laptop manufacturers to ensure the hardware can play games when unplugged, an issue we've run into a few times in the past. 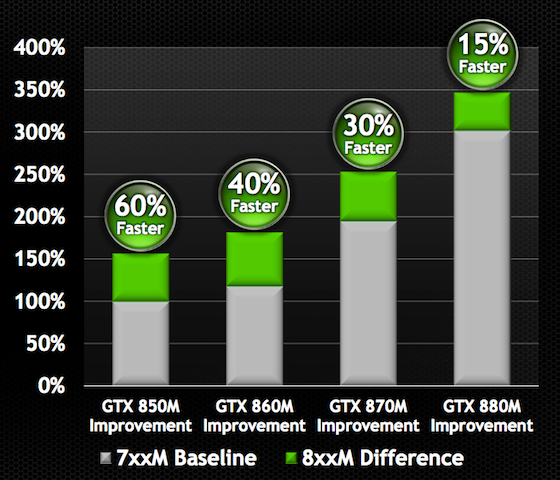 In addition to Battery Boost, Nvidia's latest laptop GPUs are getting significantly more powerful this year, with double-digit percentage performance increases across the board. The new Maxwell-based GeForce GTX 850 and 860 should be able to play many of the latest titles at 1080p and high settings, and even the Kepler-based GTX 870 and 880 should do 1080p and ultra settings on practically everything short of Crysis 3, according to the company. Plus, Nvidia is opening up some of its desktop GPU features to mobile graphics chips, including ShadowPlay to record and broadcast gameplay, and Gamestream to stream games to an Nvidia Shield handheld. Both will be retroactively added to the GeForce GTX 700-series mobile chips, as well as the 680M, 675MX, and 670MX.