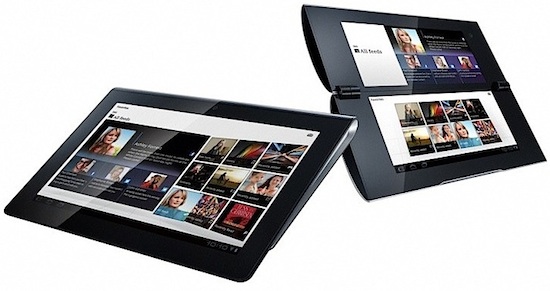 It's been a long time coming, but Sony has just unveiled two Android 3.0-powered tablets, the "magazine style" S1 and the dual-screen S2. The former is a 9.4-inch single-screen device with a Tegra 2 processor, front- and rear-facing cameras, and a curve at the top — "it's like holding a magazine" says Sony's Kunimasa Suzuki at today's event in Tokyo (via The Wall Street Journal), and it's almost to the letter what Engadget had in a leak back in February. The tablet has a modified Honeycomb interface with a heavy emphasis on tiles (reminiscent of Windows Phone 7) and can be used as a universal remote for "a variety of AV devices" — starting with Bravia, of course. There's DLNA support for TV sets and wireless speakers. Unsurprisingly, the S1 supports media via Sony's Qriocity service. It'll also be PlayStation Certified, making it the second device (after Sony Ericsson's Xperia Play) to wear that badge, with the controls being displayed as on-screen virtual buttons in the presentation.

The S2, which also leaked months prior, is a clamshell-shaped, dual-screen device with two 5.5-inch, 1024 x 480-resolution displays (and lots of bezel) that folds onto themselves. It shares most of the features of S1, including Qriocity, DLNA support, and PlayStation Certification, with controls mostly on the bottom and the PS L and R triggers adjacent to the action up top. The custom Email app splits inbox on the bottom and messages above. It's without a doubt the most unique Honeycomb form factor around, but given my recent bout with the Acer Iconia and Kyocera Echo, I can't help but have some reservations already.

According to Sony's press release, both tablets are going on sale worldwide this fall with WiFi and 3G / 4G compatibility. If history tells us anything, that release gap won't bode well (here's looking at you, Xperia X10). Video and images after the break.