We just grabbed some hands-on time with Sony's two Android tablets, the S1 and the just-announced for AT&T S2. Those monikers are not final and, sadly, neither was the software on these devices. Still, there's a lot to like about the hardware and Sony's let us know quite a bit about their plans for the software - so read on for images, impressions, and video! 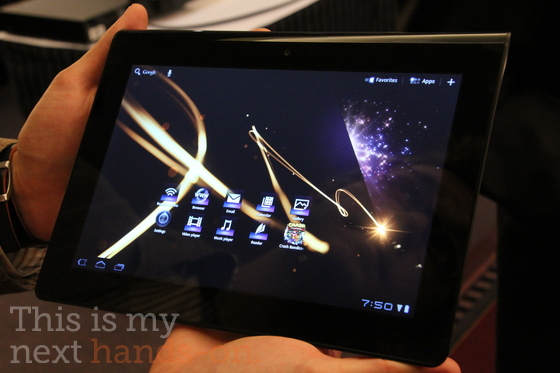 The S1 is light and fairly well-built, though that lightness comes at the expense of a slightly plasticky look and feel. The "magazine-style" fold on the back does give you a nice bit to hang on to; Sony says they believe it makes the whole device feel more balanced, and we're inclined to agree. The rear is also dappled with small bumps to further improve your grip. The S1's fold is a nice gimmick and yes, it does make it nicer to hold -- and, we'd assume, type with the slate flat on a table -- but we're not really sure it's worth the tradeoff in thickness.

What really has us impressed with the S1 (and the S2, actually) is how well it holds up to extreme viewing angles -- we're guessing there's an IPS panel under the hood, at the very least. At 9.4-inches, the screen is slightly smaller than its competitors, but it makes up for it with vibrance and quality.

The S2 is quite a bit smaller than you might expect, a feeling further emphasized by its light weight. The hinge on this dual-screen folding tablet feels robust enough and not likely to overextend when you open it. It will also hold itself fairly steady at any angle if a flat, flush setup is not your thing. 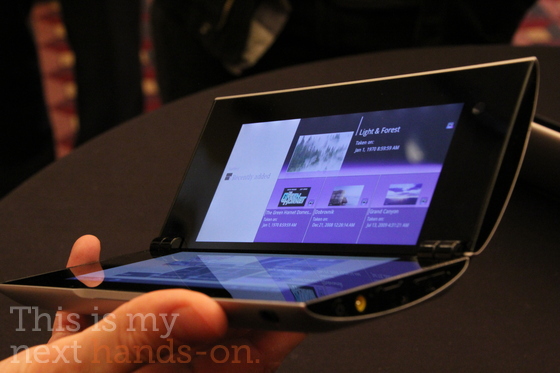 While sliding the S2 out of a coat pocket and opening it up to two screens is especially nice, what really has us smitten is using the device with a slightly-folded screen. We'll have to see how the final software on shipping devices handles the two screens before we'll give it anything resembling a thumbs up. Sony says developers can build in screen-awareness to their apps, but apps won't necessarily assume that it's a single, large screen and block your Angry Birds experience with a bar down the middle -- you can choose to set an app to either screen and keep the remaining panel blank. Unfortunately, you won't be able to run two different apps simultaneously, one on each screen, as there's a limitation they're waiting on Google to help out with.

Sony is endeavoring to make all of the on-board apps optimized for the S2's twin displays, and says it has a team working specifically on software for the device -- as well as a partnership with Adobe to develop Sony-tablet-compatible Air apps with a $200,000 prize. The in-house software's already looking perky, though -- the e-reader app on the S2 is especially nice on the dual-screen format, as you get one page per screen. Both devices are going to be PlayStation Certified, so they'll be able to access and play the (sadly still quite small) suite of PlayStation One games made compatible for Android devices. We gave Crash Bandicoot (what else?) a try on the S2: the main controls were on the bottom (excepting the "shoulder buttons," which were on the top display). The S2 was actually pretty comfortable to hold as a gaming device and the touchscreen buttons were fairly responsive - and apparently they can be moved around on the screen at will to fit your ergonomic preferences.

Sony also talked up something called "QuickView" built into their browser, which they claim speeds up page load time by showing you the parts you actually care to see first - but we'll see how well it actually improves things once we get a production device. Another bit of software infrastructure they're introducing with these tabets is "Quick Touch Panel," a complex software algorithm which they say increases touch responsiveness, especially when scrolling. When we swiped our fingers across the device, we found that while it's slightly better than what we get on the Galaxy Tab 10.1, it's not quite up to iPad 2 standards.

Sony's also tossing in universal remote software (and built-in IR blasters to go with it) that has a large database but can also teach the IR commands for devices it doesn't have. The software itself is fairly standard universal remote fare. If DLNA is your thing, that's on board as well -- the video player software has a button to push content right to your compatible Sony TV.

In all, neither the S1 nor the S2 come across as game changers, instead they're both capable, light devices in fairly unique form factors. We'll be waiting to see if those positive vibes can survive the standard Sony delay-to-market, potential Sony "aspirational pricing" we've seen before, and the potential disappointment a dual-screen software setup could bring. Frankly, we'd like to see the company get a win here.