Amazon's Fire TV is safer for kids with latest update

Parental controls, a simpler interface, and time limits for the set top box

Share All sharing options for: Amazon's Fire TV is safer for kids with latest update

A feature promised at the launch of Amazon's Fire TV is nearly here. It's called FreeTime, and it's a fairly straight port of the same functionality that Amazon offers on its Kindle Fire tablets. The basic idea is simple: it offers kids a basic interface for browsing TV content and it offers parents discrete controls for what content their kids can access (and for how long).

The feature is technically just a bit late — Amazon had originally said it would launch in May — but company says it wanted to include other features in the software update the consumers were asking for. Namely, in the regular Fire TV interface users will be able to filter their searches just so they see all the content that comes free with an Amazon Prime subscription. The initial launch — coming within a week — is being described as a "narrow" release to a limited subset of subscribers, with wider availability in the coming weeks.

The goal for FreeTime, according to Peter Larsen, VP for Kindle, wasn't just to make a dumbed-down version of the full TV interface. "Parental controls are sort of built-in as an exercise to take the adult experience and then to reduce it," Larsen says. "Which, inevitably, lends you to an experience that's a little bit like safety scissors. Yeah, they work, but they don't work particularly well for anybody." Instead of text, there are big images — some of which are simply categories of video that kids might be interested in, like dinosaurs or Dora the Explorer. 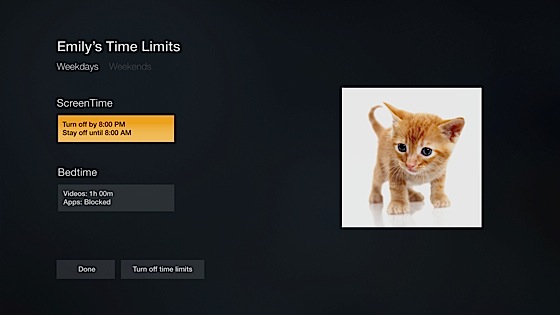 Families can also sign up for FreeTime Unlimited, which offers broad access to an array of content from Disney, Nickelodeon, and others in a bulk package. Specific apps can be white-listed to work within FreeTime, and interestingly Amazon disabled ads within those spaces and also was able to exert stricter controls on in-app purchases. That's the sort of granular control over the ecosystem that drove Amazon to make its own products on top of Android as opposed to working on another platform. "If you have the ability to have ownership of the hardware and operating system and the applications and the cloud layer," argues Larsen, "you can really do some deeply integrated, innovative things."

Parents are able to set specific time limits, both the duration of TV time and also the specific times of day when their kids will be able to access FreeTime. Nate Glissmeyer, director of product for FreeTime, says these kinds of controls actually help with parenting, because they can reduce the inevitable arguments that come up with TV. 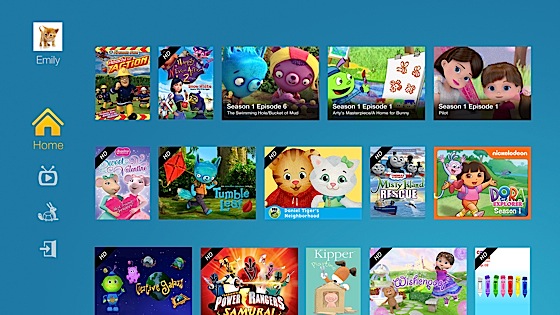 As Glissmeyer jokes, the debate often boils down to kids asking, "Hey is it okay if I buy this? Is it okay if I play this? I would love to watch this for a another 30 minutes. How about 30 more seconds, is that okay?" Instead of having to "lawyer" with their kids, Glissmeyer believes that these parental controls will make it easier for parents to set boundaries. Kids, Amazon hopes, will actually have more freedom within those boundaries than before. Larsen says that kids can "learn, play, and explore all by themselves without having a parent looking over their shoulders all the time."

FreeTime arguably makes even more sense on TV than it does on a tablet. Like it or not, TV is still the fulcrum around which the family living room usually pivots. If parents are going to plop their kids in front of the boob tube anyway, Amazon is betting that doing it in a pre-set environment will be better for everyone.

Update 6/19 3:00PM: Amazon now says that the initial rollout will start within the next week, but not today.