Is HTC's AirPlay solution for the One series a value-add?

So you've purchased an HTC One series phone after reading our reviews, and now you’re looking for the perfect accessory to complement your new device. HTC thinks it has the answer with the Media Link HD, a minuscule streamer that connects to your TV over HDMI and lets you wirelessly push whatever is on your smartphone’s display to that big screen in your living room. In addition to mirroring you can use it in a dual-screen streaming mode that’ll let you continue to use your phone to browse the internet or read emails while playing a video, slideshow, or playlist on your TV.

Sure, none of that is a terribly novel idea: DLNA (the technology on which the Media Link HD is based) has been around for what seems like eons, Apple has offered similar features with AirPlay, and to top it all off HTC already had a go with this back in 2010 with the similarly-named HTC Media Link.

While this technology isn’t new and the idea isn’t all that fresh, it’s still very rare to see wireless screen mirroring pulled off properly and easily. We've said before that “AirPlay remains Apple's real trump card, the one feature... that no competing device can equal.” If HTC hopes to prove that wrong, the Media Link HD needs to be dead-simple to set up and use, the price needs to be right, and performance can’t be ignored either. The accessory itself rings up at $90 — far out of impulse purchase territory — but read on to see if HTC has a true AirPlay competitor on its hands for the One series. 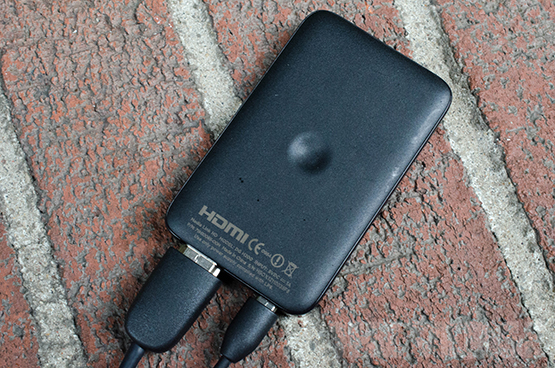 The Media Link HD is a black dongle about as large as a cigarette packet (but only a third as thick) with HDMI and Micro USB ports on the bottom edge of the device. On the top is a reset button that’ll let you bring the Media Link back to its out-of-box condition. Unfortunately, HTC has opted to use glossy black plastic for the top of the unit, and, as usual, it loves greasy fingerprints, dust, and scuffs.

The rear uses a more-preferable matte black plastic, and there’s one distinguishing feature back here — a little dimple that helps the device hook into an included mount for sticking it to the back of your TV or any other flat surface. In all, a device like this is supposed to go unnoticed, and the Media Link HD fits that bill. 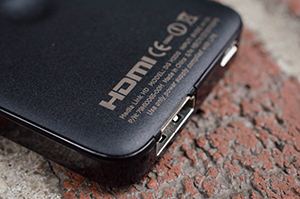 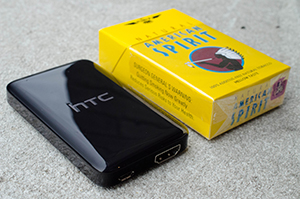 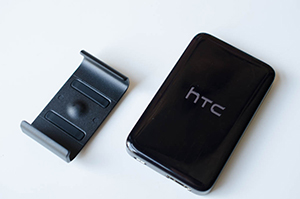 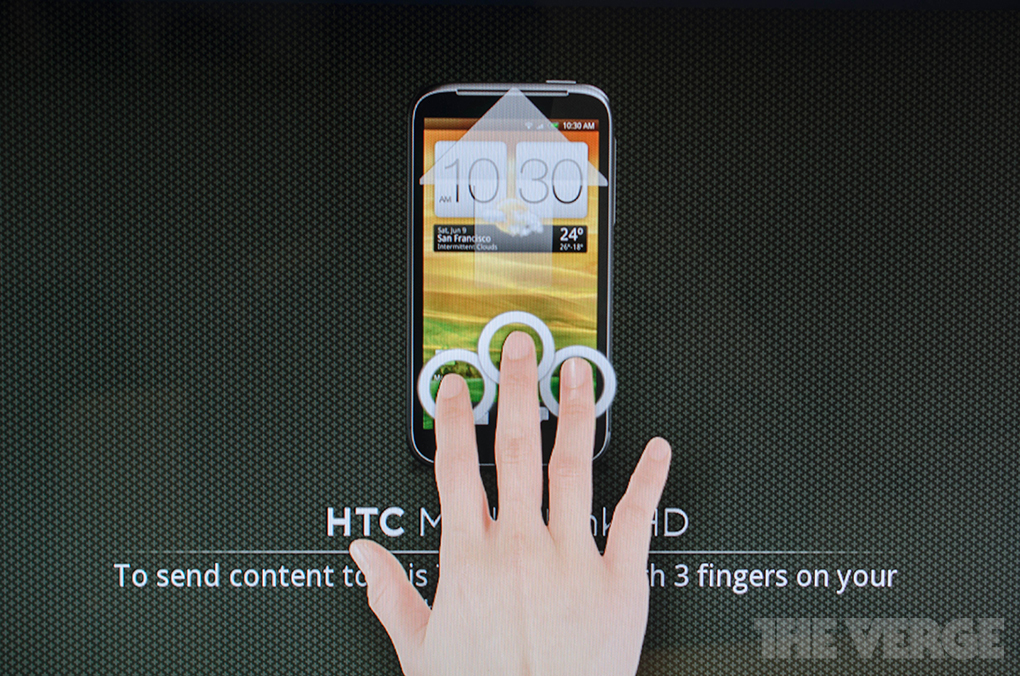 Thankfully, getting the Media Link HD up and running is about as simple as the hardware itself — a key feature when competing with AirPlay. Just open the box, plug in the provided Micro USB power adapter to the wall or TV (if it has a USB port), and connect the included HDMI cable to your TV. The Media Link HD will power on, and you’ll be prompted to swipe three fingers up on your phone’s screen to set up a wireless connection — a gesture that's used universally to connect and disconnect to the dongle. The setup is all automatic: if your phone is on a Wi-Fi network (802.11a/b/g/n) the dongle will get the security info and connect on its own, and if you’re on a cellular connection your phone will make its own peer-to-peer Wi-Fi hotspot. You'll then be presented with a couple of slides letting you know how to use the Media Link HD. It only takes a minute or two at most to get set up, and it can connect in a few seconds once the devices are configured.

Once connected, supported apps like Gallery and Music will play content directly onto your TV screen in a multitasking / content beaming mode that leaves you free to mess around with your phone during playback. These supported apps gain a "close" button on the top right corner of the screen that you must click to return to mirroring mode, and a persistent notification will show that you're connected. If you want to disconnect altogether, you simply need to swipe three fingers down on the display.

This is all a great improvement over the original Media Link, which had plenty of options and settings during setup that just made the whole process more confusing. The tradeoff is that only the One X, One S, Evo 4G LTE, and Droid Incredible 4G LTE can connect — though, to be fair, AirPlay is similarly limited to Apple's own ecosystem. A solid blue LED on the face of the unit lets you know that the Media Link HD is powered on and connected, and if it’s red that means there’s a problem. Fortunately, the light is dim enough that it doesn’t cause too much distraction sitting next to your TV, but you’ll probably want to hide the unit behind your TV anyway.

There’s no doubt that HTC’s engineers have nailed the setup procedure with the Media Link HD, but that’s all for naught if streaming and mirroring performance isn’t up to par. Fortunately, the system does work mostly as promised, but there are definitely some hiccups.

Let’s start with the good: after establishing a connection with the Media Link HD, performance is fairly solid. Swiping through Sense 4.0’s homescreens and menus works well, as does playing music and photos. That’s not to say there isn’t a delay: throughout mirroring you will notice that the two screens don't quite line up, but for general browsing this isn’t a major issue. It is a problem for games that require reflexes, though: Angry Birds works fine, but Grand Theft Auto 3 doesn't. AirPlay's lag is small enough that gaming is totally possible, but HTC's not quite there.

It’s important to note that you’ll be forced out of mirror mode while playing media using the built-in music player and gallery apps to view music, video, or photos. As soon as you select a song to play or open up a photo your TV will disconnect and quickly buffer up the content, leaving you with controls on the phone’s screen and free to multitask. Once you're finished viewing content in multitasking mode, you'll need to click a button to return to mirroring. Mirroring makes perfect sense — what you see on the phone’s screen is what goes on the TV screen — but HTC's solution for multitasking (i.e. content output) isn't nearly as seamless as we've gotten used to with AirPlay. 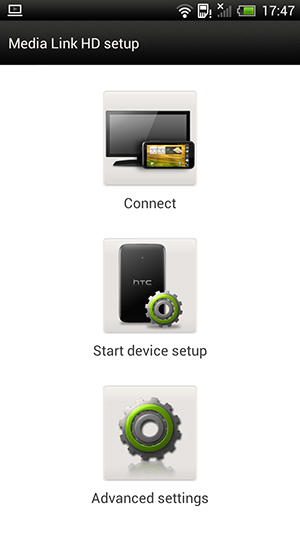 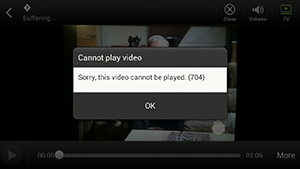 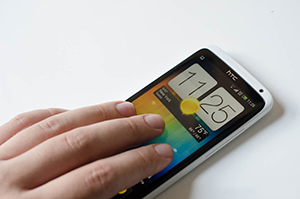 In terms of video performance, playback isn’t perfect. While the device officially supports AVI, MP4, MOV, 3GP, MKV, and H.264, not every file using those containers is going to work. One MKV froze the accessory every time I tried to play it, requiring a hard reset. More frustratingly, some files would play just fine on my phone, but refused to work when connected to the Media Link HD. Sometimes video played without a hitch, but it only takes a few hiccups to get me frustrated while watching a movie. Also, you might want to sit down for this: 1080p playback is not supported. Video at that resolution will begin to play, but if you want anything close to a smooth, uninterrupted experience, you'll need to stick with 720p.

That video experience only applies to local files, videos from the non-HD HTC Watch store, and YouTube — other apps that don't officially support the Media Link HD suffer as a result. Since apps like Netflix, Hulu, WatchESPN, and HBO GO don't use HTC's API for the streamer (the company has still yet to release it), playback occurs in the normal mirroring mode — with video running on both the phone and the TV screen at the same time. Unfortunately, the system just can’t handle it: video is barely watchable, with laggy audio and general playback problems. This is also a serious problem for third-party music apps like Spotify, Rdio, or Pandora — playback isn't as solid since it's stuck in mirroring mode, and the system will get confused and play audio right over a video or song you're playing in another app.

You’re supposed to be able to multitask on your phone while playing video and listening to music on your TV — that's the whole point of the multitasking mode, after all — but you’ll experience dropouts when you start loading too many webpages or download app updates from Google Play, for instance. I also noticed that the silky-smooth performance on the One X I tested on started to fade away when I hooked it up to the Media Link HD. Websites often didn’t scroll as smoothly on the phone, and the accessory had trouble keeping pace, with the image on the TV set often jumping to catch up. 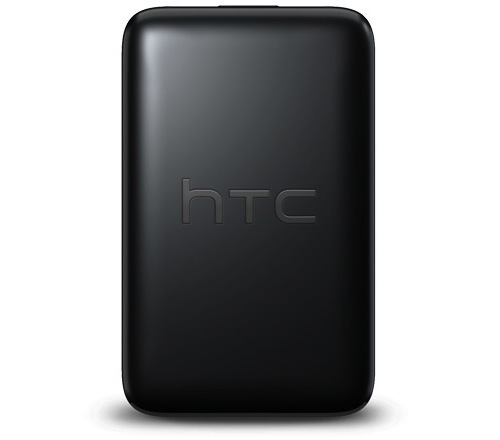 The Media Link HD gets a lot of things right: it’s portable, extremely easy to set up, and often does what you ask. Unfortunately, it just doesn't do its job very well. There are lots of rules that you’ll need to remember — far too many for a device that should in theory just magically put whatever is on your phone onto your big TV screen. You’ll always need to know which apps support the Media Link HD’s API, and you’ll have to remember that opening up a single photo will exit you from mirroring mode. That’s not to mention video playback, which can’t be counted on.

There's another major issue: content selection. It shouldn't even be a discussion for a device like this, but, unfortunately, not a single third-party app officially supports the Media Link HD. HTC has yet to release its API for the device, and even once it does, I'm not at all confident that developers will take the time to add a few lines of code for a device like this. The upshot is that you'll be limited to playing local videos and those from HTC Watch for now (and maybe forever, assuming Netflix and others neglect to add support), you’re only going to be able to keep a handful of movies on the precious few gigabytes of storage in your One X, One S, Evo 4G LTE, or Droid Incredible 4G LTE.

Overall, this isn't AirPlay: performance is weaker and it's not as easy to use once you're set up. If you have one of these newer HTC phones, you're truly better going wired here. All of these phones support Mobile High-Definition Link (MHL) — just buy an adapter and connect your device to your TV over HDMI. It's much cheaper and performance is rock solid. However, if you simply must go wireless, you don’t have many other options besides this $90 dongle. The Media Link HD will do a fine job if you're in that latter camp — so long as you're only looking to play back videos shot on your phone, YouTube clips, and some music for your friends. Just keep that rulebook handy.