UK Three has announced that the cyan Lumia 800 is available for purchase in local stores.

The black Lumia 800 launched in the UK just last week, and already Three UK is delivering on Nokia's promise to follow shortly with cyan: the carrier has announced that the aqua-hued version will arrive in local stores today. The alternative color is still listed for pre-order on Three's online store, so you'll have to hit the pavement to pick one up for now. If cyan doesn't float your boat, Nokia has said the pink version of the well-reviewed phone should launch a few weeks after the cyan Lumia 800. Look for it to hit stores sometime next month. Although there's still no word of a US release date, the Mango phone does carry AT&T's HSPA+ bands, so buy one unlocked if you so desire. 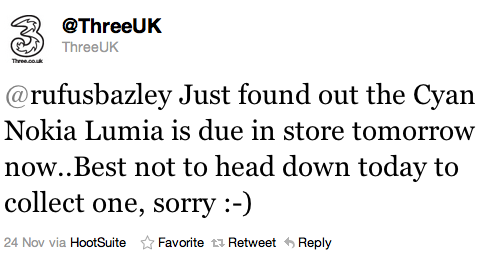