RIM has leaked more details about the upcoming Bold 9790 and Curve 9380 on the BlackBerry developer blog, indicating that the OS 7 devices could be officially announced soon. According to the post, which informs developers of the availability of new simulators to test apps, the Bold will have a 480 x 360 2.4-inch touchscreen, while the touch-only Curve features the same resolution on its 3.2-inch display. We previously reported that the QWERTY 9790 updates the 9700 with a rumored 1.2GHz processor, 8GB of internal storage, 5-megapixel camera, and NFC, while Crackberry says the 9380 is a lower-spec'd device that's bumped down to a 800MHz processor and 1GB of storage. 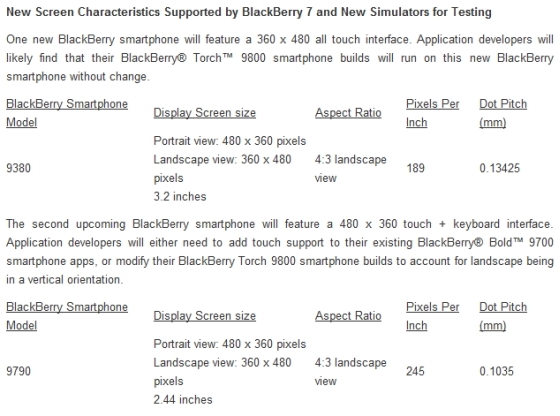 More from this stream BlackBerry Bold 9790 rumors and information