T-Mobile picked last November to launch the myTouch 4G, Motorola Defy and LG Optimus, and this fall is shaping up to be similarly huge, according to a product roadmap that TmoNews picked up. The company appears ready to bolster its lineup with nine new phones and three tablets in the course of three weeks, from October 26 to November 19.

On the phone front, T-Mobile's got a new device for just about every conceivable user, some of which we've already seen. The Samsung "Hercules," which we found back in May and is almost certainly T-Mobile's Galaxy S II variant; and the HTC "Ruby," which we've seen as the HTC Amaze 4G, both got confirmed. (TmoNews says both are coming on October 12, not in November as the slide says.) Also coming are the LG Flip II, a funky dual-screened keyboard slider; the BlackBerry "Dumoine", which looks like the Torch 9810; the LG Maxx QWERTY and Maxx Touch, two new myTouch devices; and the HTC "Omega," which was already announced as the Windows Phone-running HTC Radar 4G. We don't know much about the Samsung "Ancora" or the Huawei "Wayne," except that both will run Android and the Wayne will be $99 on contract — expect an entry-level, probably T-Mobile-branded phone there.

Roadmaps are far from gospel truth — the Hercules was originally on the slate for September — but given what we've seen so far, it's going to be a good holiday season for T-Mobile customers. 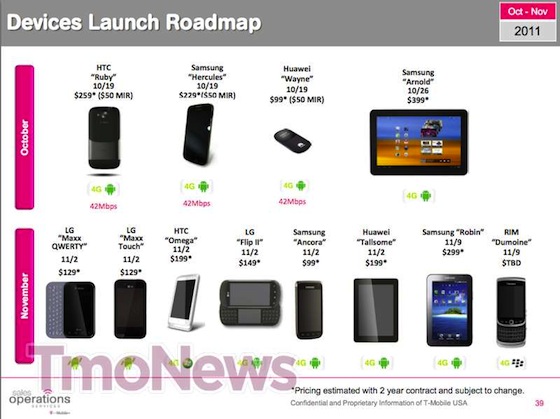