comScore has released its latest numbers from its US mobile markeshare survey and Android is still leading the pack, with 43.7 percent of all smartphones over an averaged three-month period ending in August 2011. That's a relatively small 2 percent increase over its July numbers and may show signs that Android's rapid rise in marketshare is slowing. Apple's iPhone had an even smaller increase, from 27 to 27.3 percent. Both increases came at the expense of the company you'd expect: RIM. BlackBerry continued its downward trend, sliding from 21.7 to 19.7 percent from July to August. It's possible that those numbers will turn around, as RIM introduced several new BlackBerry phones in late August and early September. Microsoft also dipped, but notably it seems to have slowed its drop as Windows Phone devices take up the slack from aging Windows Mobile phones.

In all, the small changes aren't too surprising given that August is typically not a big month for smartphone sales. The holiday season is coming up, however, and competition will be getting quite a bit fiercer in the months ahead. Apple has just introduced the iPhone 4S, adding Sprint as a new carrier for the phone for the first time. That should significantly help its numbers and help fend off what could be a renewed effort from Google, which is expected to announce the the newest version of Android next week along with a new halo device currently referred to as the Nexus Priime. 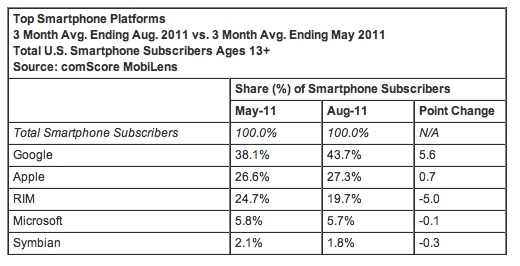