Don't you just love when things come together just as planned? That's right, just as we had heard, Motorola's Sanjay Jha and Sprint's Dan Hesse took the stage this morning in NYC to announce a brand new Android 2.3 device coming this summer: the Photon 4G. The announcement itself represents the big step of Moto and Sprint working together, but the phone itself is an equally big deal. Think a breed of the Atrix's dual-core Tegra 2 processor, the Droid X2's qHD display, and the Evo 4G's WiMAX speeds. And it's also Sprint's first ever global Android device. Yes, the 4.3-inch Photon is packed to the brim with things to be excited about, so hit the break for a look at the specs, some early impressions, and a hands-on video!

Below is a quick snapshot of the full specs, but since we're dealing with one awesomely spec'd device here we will highlight a few. The candybar handset has a killer 4.3-inch display with a 540 x 960 resolution, and like the original Evo, it's got a kickstand around back for when you get tired of holding it. Internally, it packs a 1GHz dual-core Tegra 2 processor, 1GB of RAM, and 16GB of storage. And as its name suggests, it's got a 4G radio, but it's also Sprint's first ever Android phone with GSM roaming capabilities. 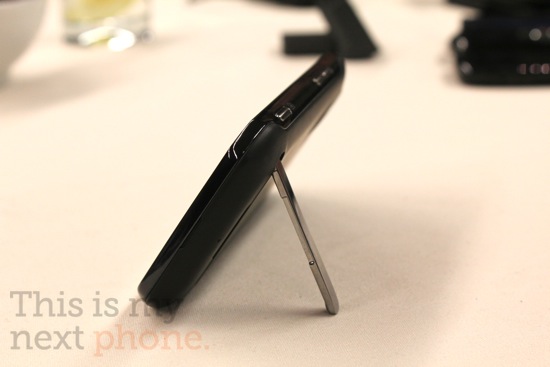 In use, the phone feels just as high end as you'd expect from such a spec sheet. It's got an interesting design with the top corners cut off to make an octagon-like shape and the rubbery back feels great in hand. The power button and headphone jack live along the top and the left edge houses micro-USB and mini-HDMI ports. I have to say I thought the build quality was top notch (better than my Droid 2) and it was actually lighter than I expected it to be, though it's nowhere near as svelte as the Infuse. Absent from the specs is NFC support. Sprint says this was a timing issue, but still is committed to putting out more Google Wallet devices.

The Photon runs Gingerbread, but it's a heavily customized Motorola experience. Interestingly, Moto doesn't want to call its skin Blur anymore. It has the same styling as we've seen on the Droid X2, with a new customizable and persistent four-icon launcher along the bottom of the homescreen and a reorganized app drawer. Sprint's also touting some added enterprise security features with new VPN integration and data saver apps. There's also a neat trick in the calendar that lets you add a conference call number PIN and the phone will automatically input it when you dial in. Interestingly, the device will also be able to run Moto's Webtop, but Sprint isn't announcing any accessories on that front yet. While the software tweaks may not please all, I can happily report that the performance on this thing won't disappoint. Like the Atrix, apps open quickly and transitions are smooth.

Sprint hasn't set a price on the Photon yet, but it does promise that it will hit sometime this summer. With the Evo 3D going on sale around the 24th of this month and now with the Photon in its court, there's no doubt that Sprint's lining up the best Android handsets around. Which one should be our next phone? We'll have to wait on the reviews to answer that.